A dozen or so firefighters and cops walked into City Hall and left their boots on the steps after refusing to comply with the vaccine mandate. HK
Pancakes, bacon, eggs – you name it, the firefighters had it all at their community breakfast. Except for vaccines and, consequently, their jobs.

A vaccine mandate on city employees went into effect Monday. As of that morning, 99% of city employees complied: they got vaccinated and showed proof or else requested an exemption for medical or religious reasons.

The Seattle Fire Department reports that 93% of its employees are vaccinated, 6% submitted requests for exemptions, and 1% did not submit records of vaccination. That 1% amounts to 11 individuals from the SFD who would rather be unemployed than vaccinated. According to a blog post from the Department, the separation process has begun for those people. The guy in the middle, Chris Connelly, said the unvaccinated, ungloved group gathered together "to show the public that we still care." HK
“I fully believe that our body is ours, that it's God's gift to us, and we need to be responsible with it,” said Andrew Stewart, an unvaccinated medic with the Seattle Fire Department. “I don't think the government should have a say in what we do with our bodies, and I'm willing to fight for that.”

Stewart has five children with his wife, a pediatric nurse whose failure to comply with a vaccine mandate also put her out of a job. Stewart got COVID-19 in January and claims he still has natural immunity. (The Centers for Disease Control and Prevention recommends vaccination for those who’ve already contracted the virus.) He is currently looking for employment working with his hands and helping people.

The morning after the mandate went into effect, Stewart and other unvaccinated firefighters, their families and other supporters set out a buffet-style breakfast for unhoused people in Occidental Park as a last hurrah of public service before dropping off their boots at City Hall. The community feed was a one-time gig, according to unvaccinated firefighter Andrew Pittman. It will not become a regular program to address the needs of unhoused people in Seattle.

Pittman is one of 66 employees at SFD who is waiting on a religious exemption request to be processed, which can take several weeks. These employees are currently on leave and unable to work until they get vaccinated or until they’re granted an accommodation.

Pittman’s kids go to Catholic school, and he subscribes to “Judeo-Christian” values. He said he does not have to point to where Christianity says you cannot get vaccinated.

“I can say I'm an anti-COVID believer, and that should be enough. I mean, that's the whole belief structure of our state is that we allow people to believe as they want,” Pittman said. “I don't show up on a fire engine and ask any of these people, ‘What's your belief? Why are you homeless?’ before I start treating you. ‘Did you pay taxes?’ We love everybody. We show love through action. And that's why we're here today.”

“We’re just trying to show the public that we still care and we're still here in any capacity that we can,” said Chris Connelly, an unvaccinated firefighter who spent the morning cooking eggs without a mask or gloves.

There was not a mask in sight at the buffet, and gloves were worn occasionally. One server was photographed handling bacon with his bare hands. The CDC estimates that at least 30% of all foodborne illness outbreaks result from bare-hand contact with ready-to-eat food. Public Health — Seattle & King County recommends people, vaccinated or not, wear a mask in all indoor public spaces and in crowded outdoor public spaces.

One person who lives outside near Occidental Park stood in line with a mask on. I asked if he knew the firefighters serving him were unvaccinated.

The man and I exchanged a binding pinky swear. Although surprised, the man shrugged it off and continued down the lineup of tables.

Two people from Statewide Restoration, a company that helps with the aftermath of a fire or other disaster, brought pastries, fresh socks, hand warmers, and hygiene kits. They were also looking to recruit firefighters who lost their jobs.

Loss Specialist Manager Rae Mattingly said the company was not concerned about hiring unvaccinated employees. Michelle Walsh, also with Statewide Restoration, said they are a “company that believes in people's free choice.”

After two hours of serving breakfast, firefighters convened with unvaccinated police officers at City Hall to dump their work boots. One firefighter and father of four said the shoes would show the scope of the loss to the departments. The small group, a few dozen or so, marched up the stairs and straight into City Hall. Security did not care. (I asked).

Three masks out of 22 anti-vaxxers ain't bad, I guess. HK
They dropped off 20 pairs of shoes on the stairs inside City Hall, including a pair of dress shoes, tennis shoes, and cowboy boots. The cops appropriately brushed a not-so-thin blue line of paint across their boots to distinguish themselves from the firefighters.

The stairs are especially significant, as many firefighters are sworn in at City Hall. Pittman said he took a group picture on those stairs when he first joined the department.

The firefighters, cops, and other supporters left after a prayer, a few tears, and another group picture. The shoes were snagged almost immediately. Within ten minutes of their departure a group of young people collected the shoes for mutual aid projects.

In a text message, a representative from the group said, "We’re glad we were able to save these shoes for people who actually need them instead of being wasted for some dramatic, egotistical display that would have been trashed overnight anyways." 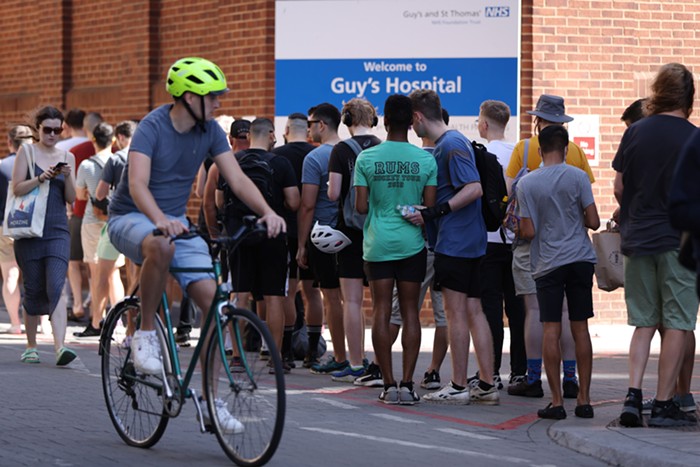