Merry Christmas, it’s time to break out the trees and lights and a copy of Batman Returns, a welcome response to those who claim that Die Hard is the best Christmas movie. Not only is Batman Returns set at Christmas, its entire plot is entangled in religious mythology, from a kid sailing down a river in a basket to Selena’s resurrection before the words “HELL HERE” to the Penguin’s plot to kill Gotham’s first-born. (Also, like Jesus, The Penguin is meant to be 33 years old, which … good grief.)

As a firm believer that this is both the best Christmas AND the best Batman film ever made, you can imagine my delight upon learning that Danny DeVito himself has penned a sort of sequel, a short story for an anthology in which The Penguin and Catwoman have established more of a … well, let’s call it a rapport.

Also of interest this week is a first-person exploration of queer history, which is my whole BRAND when I’m not busy watching movies about psychotic women and murmuring, “Honestly? Work.” Thanks as always to Phoenix for sorting through the week’s new releases, and don’t forget to skip the online monopolies in favor of local comic shops for all your holiday shopping needs. What if the world’s greatest spy, at the end of his life, realized that all of his work was in service of propping up a decadent, cruel empire? King of Spies manages a neat rug-pull, opening with an exciting action sequence in 1990s Panama before jumping ahead to present-day London, where an aging decorated hero is consumed with regrets. With six months left to live — three before a tumor in his brain makes life miserable — this superpowered secret agent decides to dedicate his unique abilities to ridding the world of the terrible wealthy oligarchs and politicians he spent his life defending. “Did we ever make a difference?” Our hero muses at one point. A colleague responds, “We’re not supposed to make a difference. The job is defending a working system. We’ve both seen what happens when empires fall.” That’s an interesting observation, one that suggests difficult choices on the road ahead — as malevolent as the ruling class is, would their violent overthrow make the world even worse?

Unfortunately, opportunities for nuance are squandered, at least in this first issue. The rich and powerful are rendered as cartoon villains, and their elimination seems to come with no negative consequences. Maybe this four-part series (by the creator of Kingsman and already slated for adaptation into a Netflix series) will grow more complex — now that the easy-pickings are dead, the next targets may present a thornier moral quandary. But on the other hand, if this is just going to be a fantasy of slaughtering the rich, who needs a book for that? That’s just an ordinary daydream.

MANIAC OF NEW YORK: THE BRONX IS BURNING ISSUE #1

A mindless killer stalks New York, wielding a giant machete and slicing clear through anyone who crosses his path; as detectives search for him in vain, he arrives at a Bronx high school to spill more blood and guts. This series is a continuation of one that ran earlier this year (now out in paperback) and it references the events of that story, so you’ll want to get caught up — particularly so that you’ll be able to follow the intriguing twist on the final two pages.

The book’s violence and gore is brief, but quite graphic, and the premise of a slaughter taking place in a high school is particularly distressing given the constant stream of such events in real life. Alas, the ripped-from-the-headlines setting is the book’s sole innovation; the rest of the plot and dialogue is by-the-book and on-the-nose: One of the students is a quiet nerd who hides from his bullies in the bathroom, obviously setting himself up for a hero turn once the killer arrives. When someone calls for help, they find themselves shunted to a voicemail system — a cynical joke The Simpsons was making thirty years ago. (“You have selected … regicide.”) A killer in a high school is a fascinating anxiety to explore, since it’s so real; but the book’s tropes are rusty and dull, rather than being sharp enough to cut.

QUEER AS ALL GET OUT Thank you to this book for solving the conundrum of what gift one should get for queer people aged twelve to one hundred. A delightful, adorable, educational meander through LGBTQ+ history, Queer as All Get Out is an exploration of ten historical trailblazers, told through accessible, generally-lighthearted storytelling. Half memoir and half history lesson, the author’s personal impressions weave throughout, lending an effective first-person touch. The selection of subjects is surprising; I had only heard of one of the figures, and the focus is mostly on people and populations typically under-represented when discussing our vast queer past. (Mary Jones, We’wha, Magnus Hirschfeld, Dr. Pauli Murray, etc.) This is certainly not a comprehensive accounting of all the people and cultures who brought us to the present day, but it doesn’t aspire to be. Ten more volumes like this would still leave plenty to be discovered, and would be most welcome.

ALSO: DANNY DEVITO WROTE A COMIC BOOK ABOUT THE PENGUIN Professional nerds will be kept busy this week, starting with Magic: Master of Metal Issue #1, based on Magic: The Gathering. From the world of Hellboy comes Sir Edward Grey: Acheron, and from DC come a whole slew of annuals that are an excellent entry-point into the stories of various spandex-wearers. Avengers #50 is a must-read milestone for fans; also vital is Gotham City Villains, featuring a Penguin story written by Danny DeVito. You will find yourself completely enchanted by the art of Wonder Woman Historia, which looks like one of those “the costumes of” books but is in fact a beautiful and lavishly illustrated story. Also of note is The History of Hentai Manga, which is exactly what it sounds like; and The Golden Hour, an intriguing graphic novel by Niki Smith about a young person recovering from a violent incident at school.
Tags: Picture Books 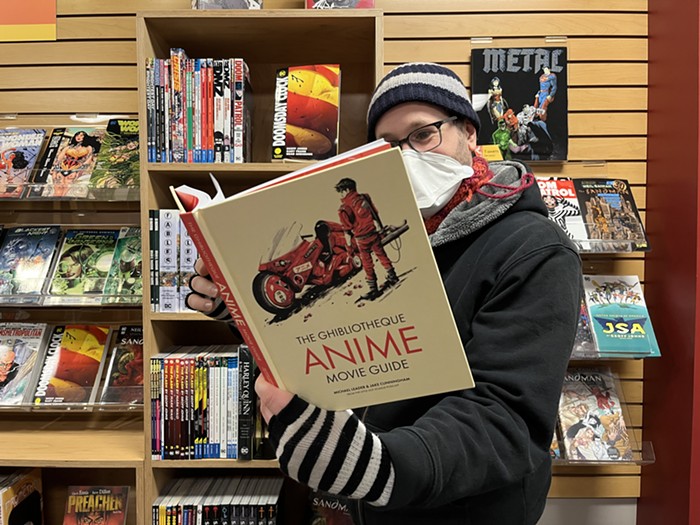