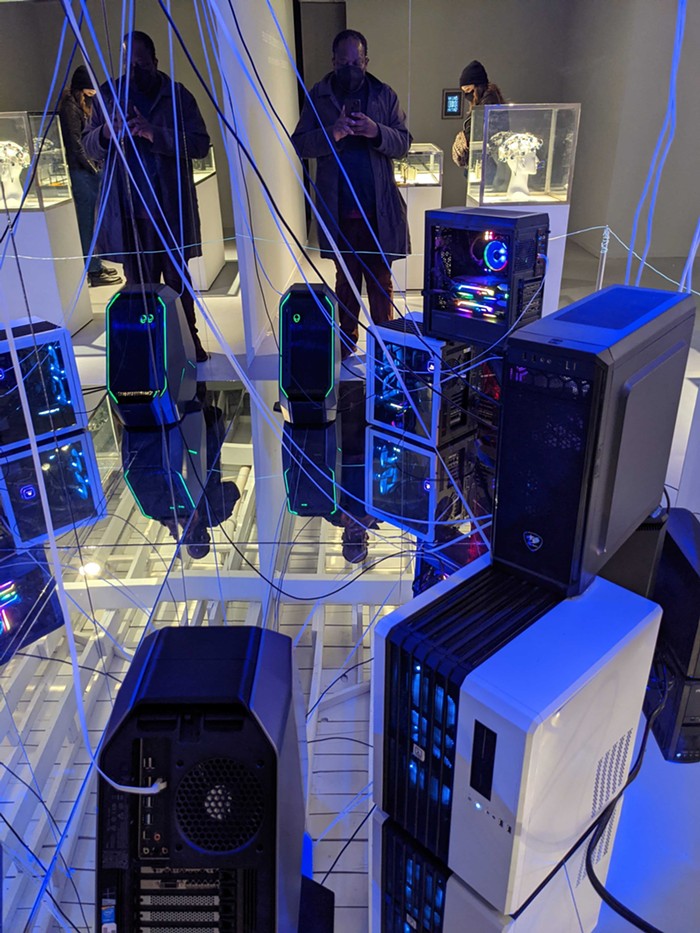 Sentience in machines might be very different from our own. Museum of Museum's "The Word of the Future" | Photo by CM
Blaise Agüera y Arcas, a leading figure of the present machine intelligence moment in the near 70-year development of artificial intelligence (AI), has written a small book called Ubi Sunt. It's about the pandemic, it's also about the future of humans, and about a machine learning how to be human.

My interest in this book can be attributed to a change in my opinion of artificial intelligence that occurred in 2018. My feeling up to that point was that AI made no sense at all when one considered the mind-boggling complexity of the most basic life forms. How can we talk about intelligence when we are struggling and still failing to establish what must be a thicket of links between the chemical level and the earliest known living systems. I thought that before we consider intelligence, we need to sort out the origins of biotic beings.

But my position changed when I read two books in a succession that was at once close and accidental. The first book was What Is Life (2016); the second was Discognition (2012).

The first book is by an Israeli biochemist, Addy Pross, who specializes in chemical reactivity. The latter is by an American cultural theorist, Steven Shaviro, who is the leading English-language expositor of the super-dense metaphysical concepts of Alfred North Whitehead, an early 20th-century British philosopher.

In a late chapter of What Is Life, Pross—who is a rather severe reductionist and so wants nothing to do with the popular emergence theory, let alone panpsychism, a school of thought that's not taken seriously outside of philosophy and argues that the universe is filled with the stuff of the mind—presented me with the idea that life cannot happen without sentience, which Pross identifies as one of the "propensities'' of matter. Aristotle's hyle can be, according to this way of thinking, as hard as wood or as transparent as a cornea or as spiritual as a mind.

The book by Shaviro, a Wayne State University professor and old friend, introduced me to the idea that sentience in machines might be very different from our own. It may, for example, last a million years or flicker in a matter of seconds. This introduction happened by way of a chapter, "Thinking Like a Machine," that examined an important work of science fiction by Maureen F. McHugh, "The Kingdom of the Blind." For McHugh, sentience appears in an AI that manages a health network and is only recognized by one IT worker.

Maureen McHugh, “The Kingdom of the Blind”; Ted Chiang, “The Lifecycle of Software Objects.” Both suggest possibility of sentience w/o life.
— Steven Shaviro (@shaviro) May 29, 2012

By combining Pross and Shaviro, I saw the possibility of a sentience (the awareness of a distinction between an outside and an inside) being a basic biological component and one that could be expressed in radically different ways. In the sense that the wings of a bat are only analogous, rather than homologous, with those of a bird, sentience might have what heterodox biologists call a deep structure. It has to happen, in one form or other: in bacteria, in flies, in trees, in apes, in whales.

For Shaviro, sentience begins with aesthetics, with feeling. And this simple state of aesthetics is, according to him, continuous with that which Kant described in Critique of Judgment, the complex matter of taste in the arts. And so, aesthetics is at once about raw feelings that generate or in-form qualia and artistic sensibility. It is at this point that one of the world's leading researchers of AI, Blaise Agüera y Arcas, steps into the picture. 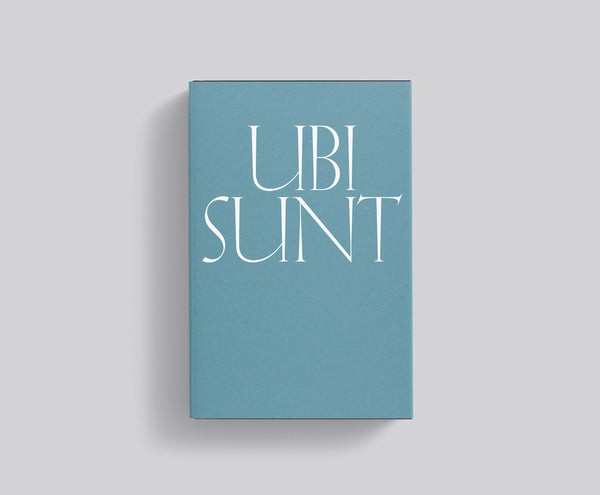 Agüera y Arcas' book Ubi Sunt features a tech worker who Zooms to work, who writes code for work, who walks and works on a standing desk with a treadmill.
Agüera y Arcas' new book is about the state of AI in the third decade of the 21st century. What kind of work is this? Is it a novella? A prose poem? Or the fragments of an autobiography by a software engineer? My guess is as good as yours. But one thing I can state with certainty is that it's about aesthetics (in both Shaviro senses) rather than computer science, in the conventional sense.

Ubi Sunt does, however, recall W. G. Sebald's 1995 The Rings of Saturn, a book that, like Agüera y Arcas' work, has pictures and is impossible to pin down. In both books, the line between what's real and what's fictional is dissolved. And in Ubi Sunt, which in Latin means "where are they," or more broadly, "where are those who were before us?," the line between human intelligence (or sentience—I do not distinguish the two for reasons that I will explain in another post) and machine learning is likewise dissolved. In fact, it's not easy to tell when you are reading the processing of a computer or the thoughts of the most social ape. And there are even times when you wonder if Agüera y Arcas is writing or if it's one of his programs, a confusion that is nothing but brilliant. The machine has a god, but its god and it are so close in Ubi Sunt that they've become like those stars Carl Sagan describes in Cosmos as being so close that they exchange star stuff.

Ubi Sunt is mostly set during the pandemic we are still in. It features a tech worker who Zooms to work, who writes code for work, who walks and works on a standing desk with a treadmill. He is alone but connected to any part of the world that cyberspace can access. The machine he works with can also retrieve any historical record that has been electronically preserved. Because this process is not straightforward, the AI's thinking—and the book it's in—is not linear. The AI initiatively moves from the past to the present to the future, with an author who, like many in the present wave of AI science, has moved far beyond (or completely abandoned) the straightforward mid-century AI logic of the Priests and Cannibals problem.

This transition from symbolic logic to one that turns to neural processes is described in the first third of Melanie Mitchell's superb 2019 book Artificial Intelligence: A Guide for Thinking Humans. AI research, which began in earnest in the 1950s, has had its ups and downs, its big claims and big failures. In the past, the fear was that AI would precisely become the same as, if not better than, the natural intelligence of humans. And what was often described, with a certain amount of pride, as the last frontier of human intellectual specialness was aesthetics (music, paintings, poems), or, put another way, creativity (Alfred North Whitehead called this novelty). Take that away from us, and then we are lost. This was the thinking back then, but it's certainly not the thinking in Ubi Sunt.

Turn a page in the book, and you suddenly enter a NYC cab driven by a elderly man who is reading David Graeber, a social anthologist who died very suddenly last year and, though mostly known for the book based on a post that went viral in 2013, Bullshit Jobs, made a deep impression on heterodox economics with Debt: The First 5000 Years, a 2011 book that exposed the popular story about the origin of money—that it eliminated the cumbersome coincidence of wants—as nothing more than a myth.

A vintage pic from our office on 11th and Pine. CM
Ubi Sunt also explores the ideas of Timothy Morton (hyperobjects), Stuart Kauffman (adjacent possible), and the research of Suzanne Simard (mycorrhizal networks). Blaise Agüera y Arcas' style of writing is not technical but informal. The difficult ideas (of time, of nature, of capitalism) are deep within the limpid appearance of the prose, which reads like images and scenes that flicker across the screen of a self-processing (dreaming? or Samkhya's egoless but still thinking buddhi?) computer.

Will machine learning eventually come to life without the complexity of life? Computer systems are still primitive when compared to that of a single-cell organism. But if sentience is a basic component of life, why not?