This Week’s Comics: Teenagers With Attitude, Magic Swans, and a Flirty Space Monster 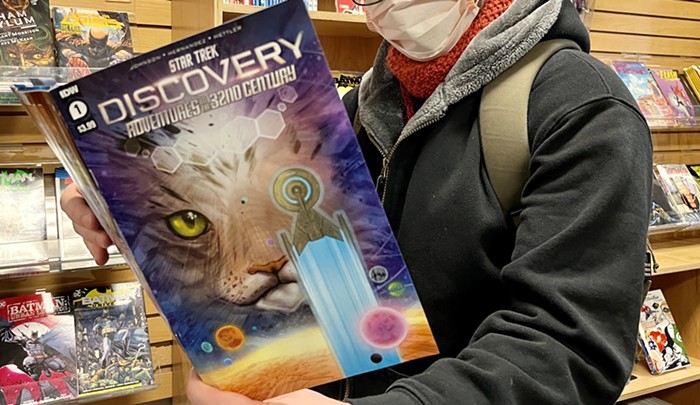 I’ve interviewed so many queer people whose favorite characters from books, movies, and TV are not the heroes, but the villains. Ursula, Magneto, the Wicked Witch, Loki — to say nothing of crushes on Bowser, Maleficent, and Skeletor. The best explanation I’ve heard for this phenomenon is that in a world where LGBTQ+ people are routinely identified as evil, it’s empowering to associate with a character who’s emphatically, gleefully, powerfully villainous.

That attitude undergirds Save Yourself, a promising and very queer comic out this week that, I’m sorry to say, doesn’t fully measure up to what I’d hoped it would be. But despite the story’s stumbles, it’s a real pleasure to engage with a tale that devotes its queer attention to the supposed bad guys, and suggests that there’s an inherent attraction and understanding between outsiders even when they come from different worlds.

Thanks as always to Phoenix for sorting through this week’s new releases — and do check out The Legend of Brightblade, a new release that I didn’t have room for in this week’s reviews but looks utterly charming. Also: a new book about a cat living on a Federation starship that I did not know I needed but now cannot stop thinking about.

Rogue Son introduces a hero and then immediately kills him, leaving New Orleans unprotected from shadowy evil-doers. But within a few days, a teen who never knew that his estranged father was a crime-fighter is called upon to take up his deceased dad’s mantle. And in a fun twist, our young hero is a real pill: He’s got a massive chip on his shoulder, pushes his peers around, and seems to hate everyone and everything. Ordinarily, this isn’t a character anyone would want to spend time with, but at times it’s clear that Dylan is hiding a hidden emotional wound that makes him more complex than your run-of-the-mill comic edgelord. Outwardly abrasive, there’s a curious contradiction in this kid who’s an asshole to everyone he meets, yet willingly takes on the role of secret protector. I’m looking forward to understanding more about this bifurcated antihero who wields resentment as a weapon because resentment has done him so much harm — and whose path to salvation may intersect with saving the city he calls home.

Many lifetimes ago, I worked for a summer on the Jim Henson Company lot, where my job was to inventory the tapes arriving from the set of Farscape. It was an awkward time for the company — they were just gearing up for production on A Very Merry Muppet Christmas Movie, which landed with such a forgettable fizzle that it’s not even streaming on Disney+ today — and the most famous celebrity I ever saw walking around was Andy Dick. (All Los Angelinos have an Andy Dick story. I’ll tell you mine someday after I’ve had a few drinks.) One of the nice touches on the La Brea lot is that, hidden amongst the ivy climbing the sides of the old buildings, you could occasionally catch glimpses of the devil puppets from Jim’s original Storyteller series, affixed to the walls and glowering down cutely at passers-by. On good days, they’d fill me with excitement, knowing that the company’s creative potential could blossom at any moment. On other days — most days — they’d make me wonder why it hadn’t in so long. The Storyteller comics, resurrected for comics in the last few years, have been as hit-or-miss as the company’s other legacy-inspired works, and this 4-issue series begins with an adaptation of an Irish folktale that has been compressed from the sprawling original down to a hasty summary with barely a moment left for the charm you could have sworn you remembered.

What’s the point of setting up a game of chess if you’re not going to play? Save Yourself presents an intriguing board: Several years ago, three muscle-bound heroines called “The Lovely Trio” crashed to Earth and now protect the planet from invading monsters — but our intergalactic heroes might not be as lovely as they’ve led humanity to believe, and it’s up to a bunch of queer humans (one of whom has developed a giddy crush on an invading monster) to discover the truth. That’s a very cool premise — but unfortunately the book spends more time discussing it than engaging it. Characters are described, then re-described; politics is explained, then re-explained; and all the recapping leaves little time for interesting decisions. On the plus side, the art is gorgeous and bright (though a bit hard to follow during the brief combat scenes) and the characters are adorable, particularly when in their blushing flirtations. But after a promising setup, the panels are mostly devoted to sit-around chit-chat, and the story’s most interesting idea — that humans are such a danger to the Earth that they must be brought under control to save them from themselves — is never explored. Overall, it feels like staring at a beautiful Rube Goldberg machine that’s missing the one marble that will set the whole apparatus in motion.