In the middle of The Moore's stage, a door.

As the venue's lights dimmed Wednesday night, the door began to glow. Smoke billowed out from behind it, and the young-ish crowd shrieked. Mitski was here—but she wasn't behind that freaky portal. The celebrated singer-songwriter entered from the side of the stage. The crowd's pitch got even higher as she made her way to center stage, where her band set up in a crescent formation behind her.

Mitski is currently on a mostly sold-out tour supporting her sixth and latest album Laurel Hell, stationed in Seattle at The Moore for two nights this week. The artist's latest record finds her reckoning with her career after taking a self-imposed break from music. While she is already known for theatrical and absorbing performances (I cried rewatching her 2015 NPR Tiny Desk concert this morning), she's doing something extra this tour. Rather than play an instrument (she plays piano, bass, and guitar), Mitski has freed herself to move around the stage. She told Vulture she worked with performance artist and choreographer Monica Mirabile before this tour, in addition to spending time studying theatre and reading theorists and directors like Antonin Artaud, Jerzy Grotowski, and Peter Brook. "I want to make sure that everything onstage exists because it has to be there," she said to Vulture's E. Alex Jung. "I want the whole show to feel essential. I don’t want anything superfluous."

And I could see a sort of studied intentionality in her performance. Her set's first song, "Love Me More," is a synthy meditation on needing more from someone, but it embodied a different meaning when performed from a stage, an indie superstar singing for a screaming audience. Mitski started to act out the lyrics—"Here's my hand/There's the itch/But I'm not supposed to scratch"—scratching her arms, belly, and legs as if to expel a pest or feeling. 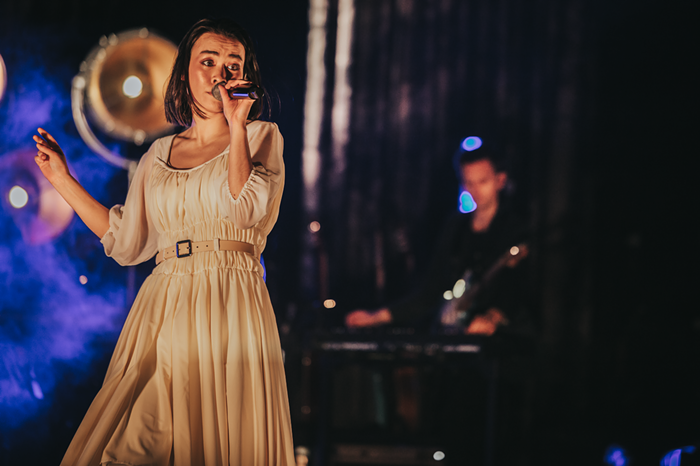 This type of choreography filled the entire show, with each song's lyrics setting up a narrative of movement. During "Working for the Knife," she used the microphone as if it were a knife, wrapping it slowly around her neck to underscore the song. On the brash and guitar-driven anthem "Francis Forever," she waved her hands in the air during the line "where you don't see me." For "Happy," she played against its dark lyrics and focused only on its upbeat tenor, smiling exaggeratedly and moving her hands up and down like a wind-up toy. It was an interesting—although literal—interpretation of her music, a heavily choreographed approach that allowed her to turn her focus inward and away from the fans.

And about the fans. Recently, Mitski took to Twitter to politely ask that people who come to her show not experience it through their phone. "When I’m on stage and look to you but you are gazing into a screen, it makes me feel as though those of us on stage are being taken from and consumed as content, instead of getting to share a moment with you," she twote in a now-deleted thread. That plea didn't stop shitheads in the crowd from filming entire songs on their phones.

But what felt even more invasive were audience members' screams between her songs. Things like, "I LITERALLY LOVE YOU!!!!" and, lol, "EVERY BAND MEMBER IS SPECIAL IN THEIR OWN WAY!!!" At an average rock concert, performers usually welcome that type of interaction, but it felt intrusive here. This show wasn't a conversation so much as an invitation to look more intimately at Mitski as a character. Considering all the screaming, the distance created by her choreography felt understandable.

The show benefited from the movement work, even if I did miss seeing Mitski play an instrument. Like during "Once More to See You," a ballad off Puberty 2 with a deep baseline, where Mitski's voice expertly dances between registers. During Wednesday's performance of it, she was drenched in red light and made sweeping, big gestures with her hands while slightly rocking her hips. It looked like love embodied, an emotional improvement from a standard performance of it. Or when Mitski heavily paced up and down the stage to "Townie," a Bury Me at Makeout Creek cut that clobbers with its screeching guitar and chaotic drums. The added physicality made it rock.

At the end of the night, the crowd didn't have to beg too long for an encore. Mitski was ready, performing Be the Cowboy's "Two Slow Dancers," then giving a few bows and a shy wave before she finally turned to that giant door. For the first time during the show, she walked through it and shut it firmly behind her, victorious over the evening. The performance and character were left right where they needed to stay—on the stage. 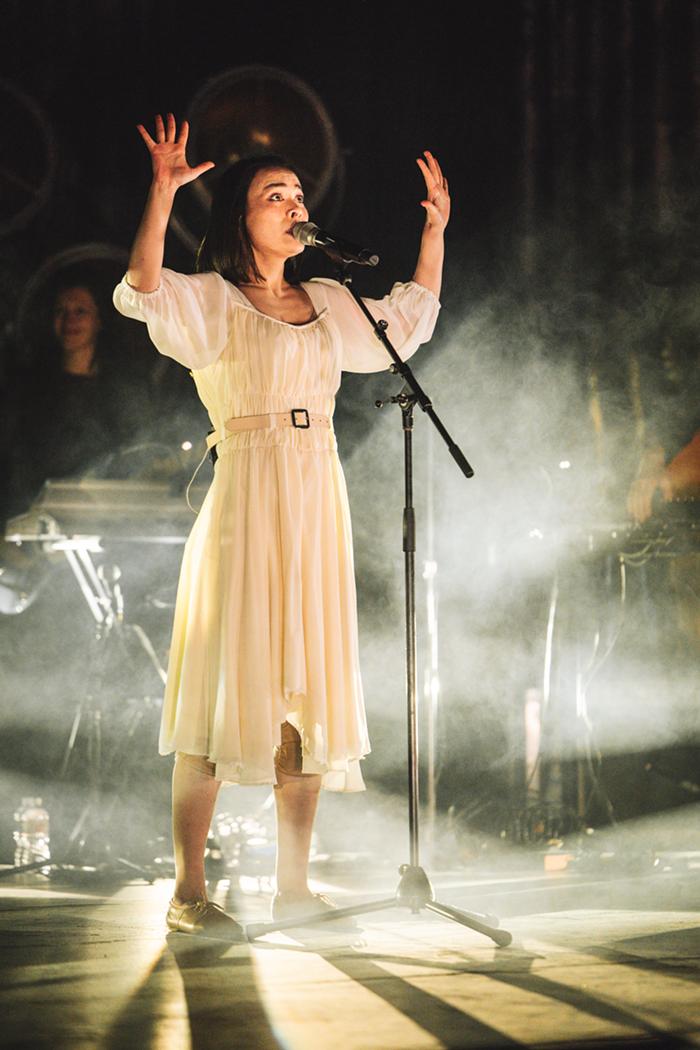 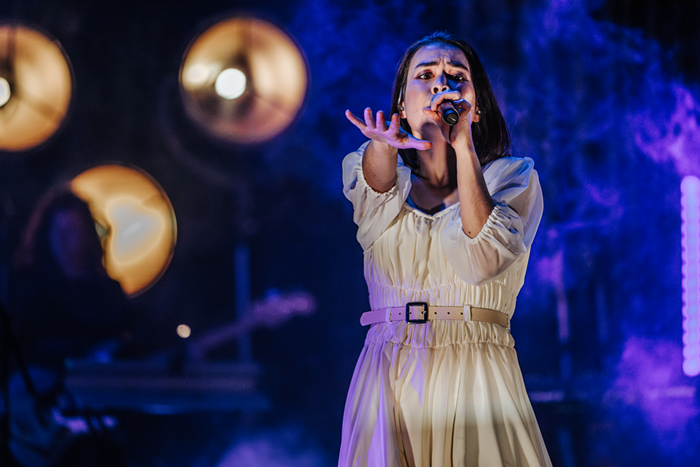