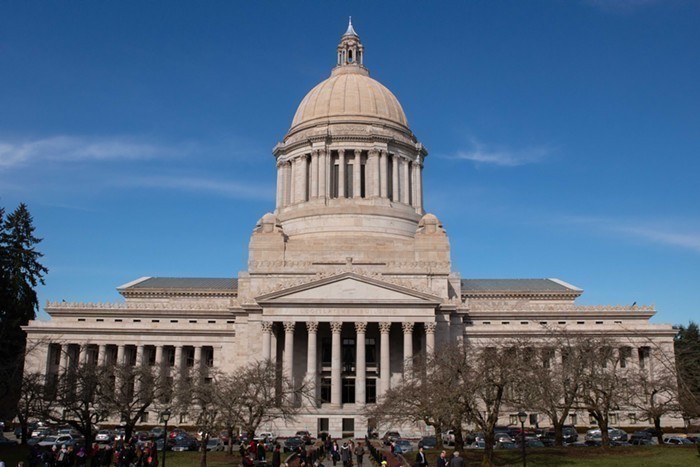 In 1940, the earliest date for which the US Census has housing data, the average rent in Washington for a two-bedroom was $22 per month. Adjusted for inflation, that’s around $350 in today’s money.

Of course, you could always live on the street, in a tent, or in your car. There are around 23,000 of us Washingtonians surviving without stable housing on any given day. Around 40,000 public school students experience housing insecurity during the school year.

We desperately need more homes, and a slate of bills proposed this session would have given us just that by ending local bans on duplexes close to transit and legalizing backyard cottages.

Alas, those bills — HB 1782 and HB 1660 — failed, in large part due to resistance from the Association of Washington Cities, a private nonprofit corporation that claims to represent all 281 cities and towns in the entire state. So what is this organization, why did it fight against more housing, and can anything be done differently in next year’s session?

The need for more housing is urgent, says housing bill co-sponsor Representative Jessica Bateman, and not just because it's getting more expensive to simply have a place to live. "We can’t deny that there’s a link between land use and our ability to mitigate climate change," she says. "We have to get people out of cars. ... When we see development happening that is not dense and near transit we’re losing those opportunities."

“We recognize that we’re in a housing crisis,” says Kent Keel, president of AWC’s Board of Directors and a city council member in University Place. (Average cost of a home in University Place: Around $700,000, double what it was five years ago. Average rent for a two-bedroom is around $1,800.)

“We’re not opposed to housing,” says Keel, but “we think that every town and city is unique, and solutions can’t be one-size-fits-all.”

Opponents to statewide housing reform frequently argue that statewide solutions would harm individual jurisdictions. For example, Rob Putaansuu, mayor of Port Orchard and vice president of AWC’s board, levied a similar critique at the "missing middle" housing bills. “It really took a broad brush to a complex issue. Every community’s different," he said.

(Every community isn't that different, though. Just like University Place, Port Orchard’s median home cost has doubled over the last five years, from $250,000 to $500,000. Average two-bedroom rent is around $1,600.)

Tacoma Councilmember Keith Blocker, who also sits on AWC's board, opposed the housing bills as well, though in a written statement he didn't say why — just that it "conflicted" with Tacoma's housing program. Tacoma home prices doubled in the last five years, from a quarter million to a half million; average two-bedroom rent is $1,953.

The AWC paints the fight over zoning as one of more government versus less government. "We’ve got thousands of hours of community outreach going on," says AWC lobbyist Carl Schroeder. "What you lose when you take away local process is the ability for the community to participate in how they grow, and those decisions are being made by folks in Olympia."

According to Schroeder, the AWC doesn't believe that legalizing dense housing would result in significantly more homes being built. In a somewhat contradictory position, however, he also warns that such an approach would result in more housing being built that would overburden local infrastructure.

"The reason why [local control] is likely to be more effective is that there are lots of features of individual communities that can never be considered by the state," he says. As an example of the type of arrangement that the state could not possibly contemplate, Schroeder cites towns with lots of narrow streets and dead ends that are difficult for emergency vehicles to navigate.

So are local limitations on housing so important that it’s more important to preserve those limitations than to build enough places for people to live? No, says the National League of Cities, a nationwide advocacy group (of which the AWC is a member). In a 2019 report, the NLC wrote that while “local control is often at the heart of policies that accelerate progress … there are examples, particularly in the affordable housing policy arena, in which state policy is needed.”

The NLC report calls for housing “floors” — which is to say, minimum standard requirements for cities. Similar “floor” requirements already exist in a wide range of other areas, like gun control and drug policy. When it comes to fair housing laws, the state establishes a baseline floor of protections for groups protected on the basis of gender, race, disability, and so on. Cities are then free to create local policies as long as they meet those state requirements.

That’s precisely what HB 1782 and HB 1660 would have done. The former would have ended local bans on dense housing within a certain distance of transit (the density and distance varied from one version to the next, but tended to cover buildings of four to six units within a half-mile of transit), and the latter would have allowed “accessory dwelling units,” a fancy way of saying backyard cottages or additions to a home.

HB 1782 "gave cities the ability to create their own rules, so gentle density is able to be incorporated into their city in a way that fits right for their town," says Seattle Councilmember Dan Strauss, a member of AWC's board and a supporter of the bill. (Average cost of a home in Seattle: Around $770,000, up from $590,000 in 2017. Two-bedroom rent: $2,188.)

That seems unobjectionable enough — so why the resistance? Well, many AWC members seem to be hung up on sitting down.

Port Orchard’s Keel is also interesting in sitting. “We all need to sit down,” he says, “and we all need to work together to solve this. I didn’t see that.”

"There really was no large robust stakeholder process," says AWC's Schroeder. "There was not an opportunity to sit down and talk about the issues."

“I would push back that there was no stakeholder engagement, because there very much was,” says Seattle Councilmember Teresa Mosqueda, a member of AWC’s board of directors. The bills’ sponsors, Representatives Jessica Bateman and Sharon Shewmake, “worked together to create stakeholder forums and pull people in,” she says, adding, “this is not the first year that this type of legislation was introduced.”

But AWC needed more, says Schroeder. "Normally on a bill this size we’ll have upwards of ten meetings with groups of affected parties," he says. "For whatever reason there wasn't a stakeholder process you would see in a bill of this size."

“She hasn’t called me either,” says Keel. “My phone works, too.”

Good grief. So let’s say, in the months between now and the next legislative session, someone’s able to lock all the politicians in an office with plenty of seating until they can hash out their needs, like in that one episode of The Simpsons where the teachers go on strike. What do AWC members want from a statewide housing bill?

Many local officials were reluctant to describe the concrete solutions that they think would address the housing crisis, but, after a little prodding, their suggestions generally boiled down to wanting more money from the state.

“I think there needs to be incentives from the legislature for developers,” says Keel. What kind of incentives? “You’d have to talk to a builder,” he says, before suggesting that the state issue a tax break on construction materials.

Putaansuu suggested “incentives” as well, particularly for building out more transportation to support added density before the homes are built. (As written, HB 1782 did allow cities to delay implementation if they needed more time to prepare their infrastructure.)

Putaansuu noted that Port Orchard just intentionally built low-density, high-cost homes centered around a golf course, with infrastructure that he says would be unable to handle population growth. The town is also building out a higher-density neighborhood called McCormack Village. Homes in that development start at a mere half-million dollars.

Schroeder had some more specifics that AWC would like to see: "We think you need to be more aggressive on providing revenue opportunities for low-income housing," he said. He noted that AWC supported legislation that provides a tax credit for affordable housing, such as a 2020 bill that included grant opportunities for cities that adopt missing-middle policies.

Rep. Bateman is skeptical that opponents will suddenly come around once a few tweaks are made to zoning reform bills. "As a former city council member, I can say that people will continue to come up with reasons to oppose modest additions to home choices," she says. "You come up with one piece of evidence to refute, and then there’s another one."

But in Seattle, many politicians don't need convincing — they're already strongly in favor of establishing a minimum level of density near transit statewide. “The most pervasive issues facing cities across the country cannot be solved alone by local jurisdictions,” Councilmember Mosqueda says. In addition to supporting statewide reforms, she’s also acting locally: Her areas of focus for Seattle housing have included measures that brought in revenue for affordable housing, as well as eliminating obstacles for nonprofit developers rooted in communities affected by displacement. Over the next year, she says, her goal is to prepare the city for updates to its Finance and Admin Services plan in 2023, which will free up more funding for nonprofits to build affordable homes.

Dan Strauss is hopeful that other Washington cities can be brought onboard for the next legislative session. "I would like to work with my smaller city colleagues to make sure they're getting what they need to meet the gentle density requirements across the region," he says.

Between now and the 2023 legislative session, Rep. Bateman is urging citizens who want more housing to contact her office so that they can mobilize more support next year. She's looking forward to hitting the ground running, and building on the momentum of the session that just ended.

For their part, AWC may take a different approach next year because they'll be under new leadership. After seven years, current CEO Peter King is retiring, with a replacement expected to be announced later this spring, according to Marissa Karras, a consultant handling the recruitment of a new CEO.

At any rate, efforts to establish a statewide minimum standard for housing aren’t going away. “I’m definitely going to bring back a bill next year,” Bateman says. “We don’t have a choice. Our housing crisis is not going to get any better.”