First Their Home Burned Down. Then Came the Contracts Residents say Seattle Property Management Associates urged them to re-enter unsafe units. SPMA declined to talk to The Stranger about the fire or its aftermath. Tipster
The fire started around 4:30 am on Friday, February 25, but that was just the start of the ordeal for residents of 3617 Woodland Park Ave N., a 116-year-old apartment building in Fremont.

The Seattle Fire Department extinguished the blaze within about an hour and began an investigation to determine the cause. That investigation remains ongoing as of March 18 according to the Fire Department, but what is clear is that the fire destroyed several of the building’s sixteen units, and the others are now uninhabitable. The tenants say heavy smoke and water damaged the entire building, and there is no electricity, gas, or water. Some units no longer have floors and walls, according to tenants. The morning of the fire, firefighters warned the tenants not to enter what was left of the building for another 72 hours.

Fortunately, none of the tenants died in the blaze. But several say that Seattle Property Management Associates (SPMA), the company overseeing the building’s operations, has made the situation worse — in the words of one displaced resident, "this whole thing has been a total nightmare." 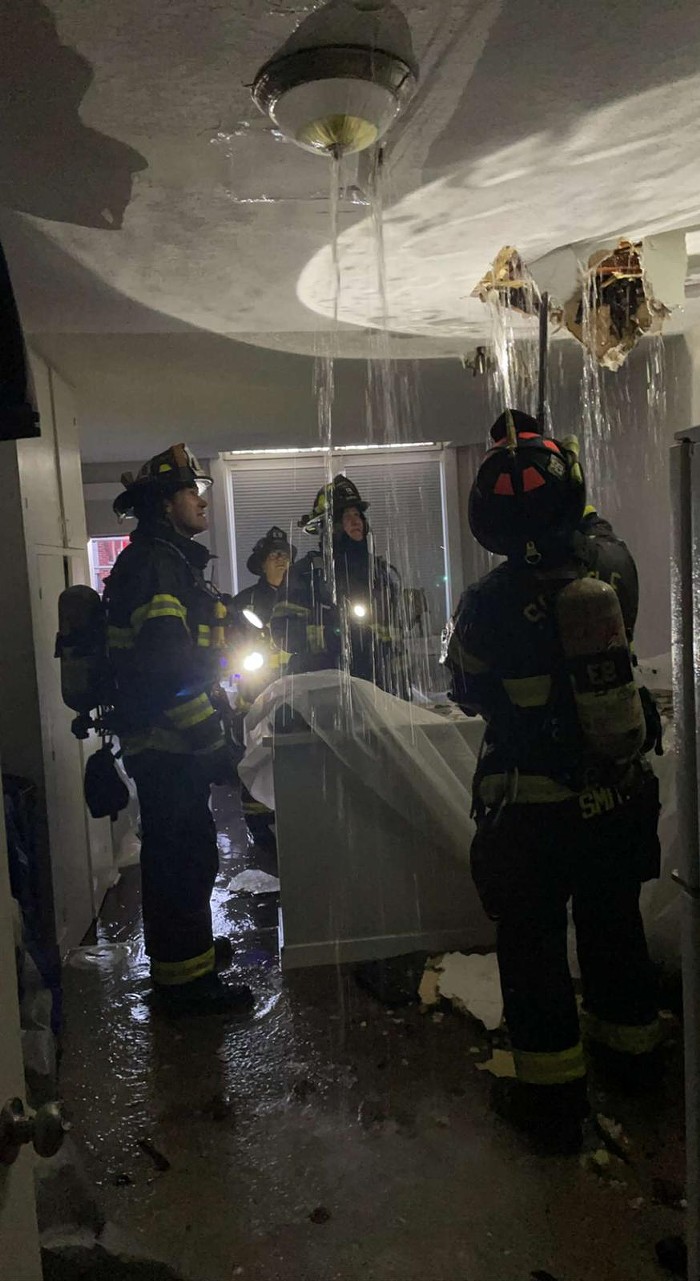 Firefighters make a few renovations in the fire's immediate aftermath. Tipster
“I guess they were just freaking out,” said Jodie (not their real name), a person connected to the property. Jodie recalled seeing a representative of SPMA on-site immediately after the fire, promising tenants that the building would be secured, as the law requires. It was not.

Tenants say they re-entered the building with a fire department escort during the day on Friday morning. The next day, they say, they received a call from an SPMA representative informing them that the building had been looted and they should return to remove all of their belongings.

“No windows had been boarded up that night," said Jodie. Possessions were strewn around as though the place had been ransacked, and medications had been stolen. There were signs of an attempt, post-fire, to break down a wall between units. Later, tenants saw an unfamiliar man standing outside the building, covered in soot and wearing a headlamp.

According to tenants, a representative from SPMA initially told them that they were unable to hire a security guard for the building until March 7, more than a week after the fire.

"We went to the building and it was basically total chaos of tenants just grabbing stuff in their arms and putting it in their cars," said one resident. "There were no firefighter escorts on that day, and the firefighters had specifically instructed us not to enter the building for 72 hours."

“There’s no floors in some units,” Jodie said. Other units were so covered with soot that tenants who tried to retrieve their belongings experienced breathing problems and needed medical care.

At least one tenant made arrangements with their insurance company to hire a trained fire restoration crew — the plan was for the crew to safely enter the building, remove the salvageable items, and restore them. But, the tenant says, SPMA would not return the restoration crew’s calls to grant them access to the building.

“They have encouraged us to go in,” said Jodie. “They told us, ‘You need to have everything out of your unit by Saturday, March 5 at three.’ That’s one week after the fire — some people are working full-time jobs.”

When reached by phone, the SPMA broker said she wasn’t able to talk but would call back. She didn’t. Numerous subsequent calls over the next several days to various SPMA numbers went unanswered.

Though SPMA managed the building, they may not have been the landlord. The property is owned by a corporation called Its My Party LLC, according to county records. State records show that Its My Party LLC is run by a person who is also listed as governor of a dozen other companies connected to various Seattle properties, including 730 Harvard Ave E., 2612 E. Madison St., and 1802 12th Ave. Many of those buildings are listed as being managed by SPMA. The person listed as governor of those companies is also listed as a broker at Westlake Associates, a real estate company located in the same building as SPMA.

In the aftermath of the fire, one of the only communiques from SPMA was an offer of a “mutual termination” contract, received via email by some tenants on Tuesday, March 1. Other tenants say they were presented with the contract several days later while they were attempting to remove the last of their items from the property.

If tenants signed, the contract would have returned security deposits along with a few days' prorated rent, parking, and utilities. It would also retroactively end their leases on February 24 — the day before the fire.

“Neither resident nor Management shall owe any performance under the lease contact after this date,” the contract reads. “All parties agree that the above actions taken by Management constitute a full and complete settlement and a full discharge of any liability for any and all claims.”

The contract also states, “The terms of this settlement are confidential and are not to be disclosed to any party, person, individual, entity, or organization,” and that, “Resident shall make no disparaging remarks regarding this incident or Management to any person or entity, including any postings on any internet site … and shall, within 4 business days of the signing of this Settlement Agreement, remove any such postings … [.]”

The document adds that if management learns that any resident disclosed the terms of the contract, “it shall immediately and irreversibly revoke the compensation granted under this agreement and may immediately charge Resident for repayment of those amounts owing, and shall be entitled to enforce that action though litigation … [.]”

Some details of the agreement are confirmed in an email that tenants say was sent by the SPMA broker. In that email, the broker wrote that SPMA had “cut checks refunding security deposits as well as prorated rent, utility and parking if applicable from Feb 24-28,” adding that a representative "will be available … to provide access for tenants to remove their remaining belongings” by the deadline of March 5.

It’s unclear if any tenants signed the agreement, but if they had, then they may have given up significant rights.

If the fire department determines that the landlord was responsible for the fire, then they’d owe the tenants a certain amount of relocation assistance based on income. But if a property is destroyed and the tenants sign a contract agreeing that the lease ended one day before, then they would likely get nothing.

The best financial protection against fire is renter’s insurance, says Edmund Witter, senior managing attorney at the King County Bar Association's Housing Justice Project. But he acknowledges that not everyone can afford an insurance policy. In that case, he says, “Don’t sign a waiver. You’re going to potentially forfeit all your rights.”

In this case, some tenants were fortunate enough to have renter’s insurance, and their insurance companies found them lodging at hotels. Others managed to find temporary shelter, crashing with friends, family, and coworkers.

In the last few days, Jodie has spoken with an inspector at the city’s Department of Construction and Inspections, who says that the city’s Property Owners and Tenants Assistance group will be in touch after a fire marshal issues a report about the cause of the fire, which should happen soon.

Nearly a month on from the fire, tenants are hopeful that they’ll soon have some financial help to find new places to live. In the meantime, Jodie says, "we are suffering."