That's one of the lessons in Master.

Avoid Ancaster College. Master drops in theaters and on Prime Video this Friday. Courtesy of Master/Amazon Prime
Of all the movies that showed at this year's Sundance Film Festival back in January, writer-director Mariama Diallo's debut feature Master is one of the most enigmatic and elusive. It's a strong work that reveals the harm inflicted by racism embedded in America's academic institutions, frequently utilizing misdirects and shifts in focus to infuse itself with touches of horror. Even as its various threads risk getting tangled up, it manages to unravel into something that draws you in delicately.

The film stars a consistently stellar Regina Hall as Gail Bishop, a respected professor recently promoted to be the "Master" of a residence hall at the elite and primarily white Ancaster College in New England. She is the first Black woman to hold the position and will have to carry a whole host of expectations placed upon her by her white colleagues. Hall, who was also outstanding in another Sundance film Honk for Jesus. Save Your Soul, gives a performance that is often understated out of necessity.

This is because she plays a character who needs to act herself, navigating the casual racism of her white colleagues with a smile and chewy disposition. It's a multilayered performance from Hall; through a simple change in expression or an ever-so-slightly hollow laugh, she speaks volumes about the perpetual scrutiny facing her character. The way Hall embodies peril and pride is one of the film's strongest elements.

Just as Gail takes on her new position, there's the arrival of a student who will also have to deal with the institution's suffocating pressures. Jasmine Moore, played with a great degree of nuance by relative newcomer Zoe Renee, has traveled across the country to attend this school from Tacoma, Washington. This seemingly throwaway location takes on more significance when a brief glimpse of her address on a moving box clarifies how far away from home she is. Now finding herself as one of only a few Black students, she is the target of racist profiling, like when a librarian asks her to turn over her bag for a search, assuming she's stealing.

Jasmine also has a brewing conflict with her professor Liv Beckman (Amber Gray). What initially seems like a minor misunderstanding over a grade spirals when it appears that a complaint Jasmine makes might impact Liv's process of being reviewed for tenure. And then, in a series of disturbing visions, Jasmine realizes there may be something more sinister underneath the school's bright facade. It isn't just Jasmine—Gail also is beginning to notice strange events seeping into all corners of her carefully constructed life. These moments are where director Diallo is in command of the film's visual and tonal terror.

The more the film goes on, the more unsettling these visions become. That said, the film isn't interested in being an out-and-out horror film. It has moments that certainly use the language of horror, but it prioritizes the experiences and struggles of characters. As Diallo put it in an excellent interview, she considers it a "spooky drama" about "looking and being looked at."

Ultimately, Diallo doesn't offer much of any hope of redemption, and that's what makes the film's conclusion so effective. It pursues an ending that's not about big supernatural frights but devastating emotional ones, about how "progress" can often mask enduring evils. And while the film's lack of answers may be a bit frustrating, that's the nature of the world that Diallo is capturing. It doesn't blink at its end—and in some of these final moments, Hall's performance goes from good to truly great. 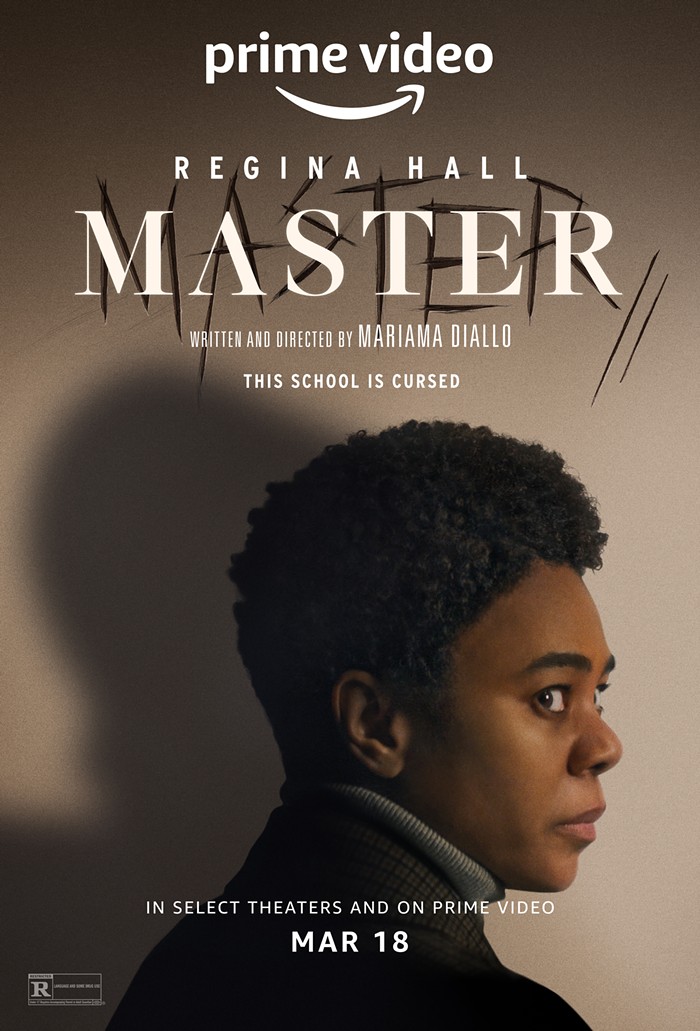 You can see Master in select theaters and streaming on Amazon Prime starting March 18.
Comments 1
Tags: Film/TV Sundance Comes to Seattle
The Stranger depends on your continuing support to provide articles like this one. In return, we pledge our ongoing commitment to truthful, progressive journalism and serving our community. So if you’re able, please consider a small recurring contribution. Thank you—you are appreciated!
CONTRIBUTE NOW