Brian Smith, owner of Baker’s, is mixologizing poetic at his new Queen Anne joint, Bar Miriam. Photo by Thor Radford/Radford Creative
Have you ever read Blood, Bones, & Butter by Gabrielle Hamilton? She's best known for her Brooklyn bistro, Prune, and she turns up on food shows like Mind of a Chef and a couple of other Anthony Bourdain joints. Sorry, I know you know.

Okay, so you know the part in the book where she takes a job at a little bar-tabac in rural Brittany that her French mom's friend owns, and she's describing the bar essentially as a community center for the village? About how the red-faced farmers bought their lottery tickets and cartons of Gauloises there? And how they'd park their tractors on the dirt road and have their cafes au lait and crepes in the morning? Then return later for roast chicken or soup with crusty bread? How the space transmogrifies through the day from sports bar to coffee shop, from bistro to cocktail lounge, a kind of provincial, endlessly shapeshifting Cheers?

I thought of this the first time I went to Baker's in westernmost Ballard, at the bottom edge of Sunset Hill. It's always buzzy like a pub inside Baker's, but instead of seventeen sports TVs and a menu of nachos and burgs, they serve simple, earthy classics. A bowl of local mussels or some charred broc, a side of burrata with roasted carrots, pasta with a meaty winter ragu. The space is casual, breathable, with shiny little old-country details. It's a great place to get a beer, but there's also a bespoke cocktail list and etched glassware to match it.

You see this everywhere in Europe and South America, and filmmakers often reference this idea—in Amélie, in Shoot the Piano Player…shit, even in Mystic Pizza. There are probably a few others in Seattle that I can't think of right now since the city has so damn many bars. But the idea's still elusive here, where our working-class PNW lumberjack-’n’-fisherman vibe of yore has ebbed away a little more year after year, with every rent hike. 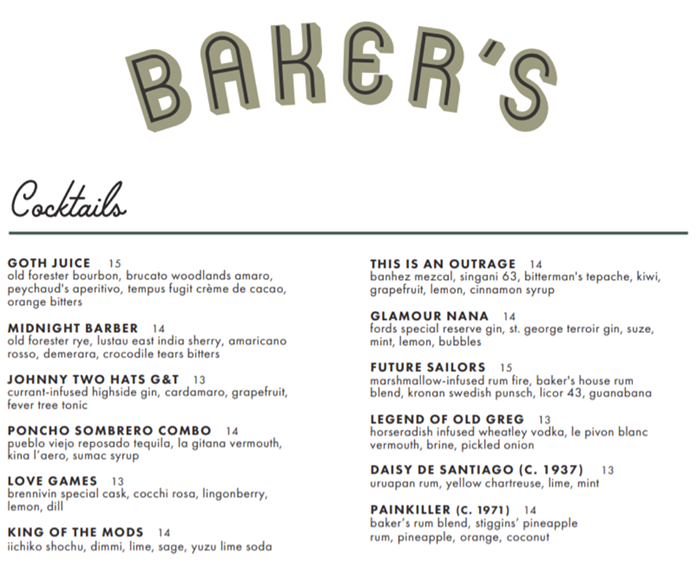 Baker’s in Sunset Hill has a The Mighty Boosh-themed cocktail list right now. Well, with a couple old classics.
So, when the bar manager at Baker's mentioned that owner Brian Smith was opening another bar on Queen Anne Hill, I was surprised to hear that it was next to the Five Corners hardware store. I grew up on the Queen Anne hilltop, and I know that spot. Dude, there's nothing else up there. You got Queen Anne Avenue three or four blocks away, and there's a Macrina and Ken's Market a few blocks in the other direction. A cemetery down the road. But at Third West and McGraw, it's just houses.

"Exactly!" Brian replies from across the bar at his brand-new joint, Bar Miriam, which opened last month. "That's the whole point."

Brian himself is behind the stick on this night, a Saturday evening in Week Three, somehow able to mix craft cocktails and talk to me without missing a beat. "I'm obsessed with the idea of the neighborhood bar. Something close enough you can walk to. If you want to have dinner somewhere else—say, at How to Cook a Wolf—then you can have drinks afterward here, close to home. Or you can have dinner here too. We're versatile. We're everything. "

Sounds great. But why this weird corner pocket in the housey part of the hilltop? Why not tony old Queen Anne Avenue? Or some other residential nabe, like Beacon Hill or Madison Valley?

"When I was opening Baker's," Brian says, "my dear friends let me live in their basement apartment on West Tenth and Galer, so I would jog the halo of Queen Anne. I had no interest in Queen Anne Avenue—It's too noisy. I wanna get my own oxygen [while I jog]. So I would turn left on McGraw and then run that way instead, through the houses, and this was always the one address where I was like, 'Man, my neighborhood cocktail bar vision? That's the place where I would want it to be.'" Lovely ersters dressed up with rose petal ice at Bar Miriam. Photo by Thor Radford/Radford Creative
When the space, formerly Bite Box Cafe, became available, Brian felt like it was serendipitous and snapped it up. "It meant the opportunity to be closer to the houses, to the people in the neighborhood. Close enough so that when you want to grab a cocktail, you can also go grab dinner at Ken's (Market). My whole idea is: You shouldn't have to drive and deal with parking or a scene just to have a nice drink."

For being three weeks old and in a quiet residential area, the place is seriously hoppin' on a Saturday night. When I arrived, there was one open seat, at the bar, and I snagged it.

I see that Brian and bar manager Meghan hold it down just fine, although he seems like he's in a daze. "Oh, it's just still weird for me that people are here. Like. It's actually happening. My idea is working."

Hey, news travels fast. It seems his bar is packed with old friends; folks greet Brian when they enter and call out "See ya tomorrow!" to Brian and Meghan when they leave. "No, I just met those people right now, while you were sitting here," he laughs. "But that's it, right? That's what I'm trying to do here."

Brian gestures to the left corner of the bar to a group of people kibitzing naturally. "The other way that it's working is that right here, these are two couples who have never met in their lives, and they've been talking to each other for 20 minutes. The whole point is to create this community space, and it's happening! I'm humbled."

Right! Like in France, like in that one book. I tell him about the scene in Blood, Bones, and Butter and how Baker's has always reminded me of it, and now Bar Miriam more so. It's even cozier in here.

"Totally. In fact, I've had a lot of people come in here being like 'This feels very European,' and I find that to be such a compliment." 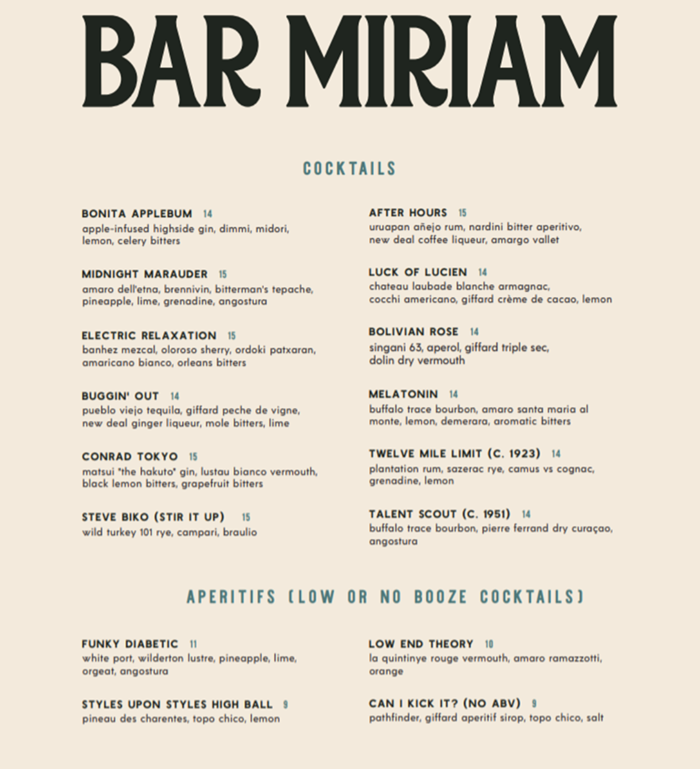 Brian comes to us from Eastern Washington, by way of Brooklyn and Denver. Seattle has always been where he wanted to open a bar, after having written over 500 cocktail recipes over his long career working in restaurants. His enthusiasm is reflected in his silly, themed cocktail menus; Baker's currently has a The Mighty Boosh-themed drink list, and there was a Clueless-themed one last quarter.

On this night, Brian debuts the list he's just written for Bar Miriam, which is A Tribe Called Quest-themed, and the Bonita Applebum is flying off the shelves: a jewel-toned beauty, made with apple-infused Highside gin, Dimmi Liquore di Milano, Midori, lemon, celery bitters, and a purple orchid perched on the edge. He makes about ten of them as I sit here, and each time he serves one, he cannot help but announce, "Bonita Applebum! You gotta put me on!" “Bonita. Bonita. Bonita.” Meg van Huygen
Per the bar's name, Miriam was Brian's grandma, and the sound system was Miriam's. She raised Brian for the first five years of his life and was a real piece of work. "She had to move from her whole house to a double-wide mobile home situation, and she made [the movers] bring her baby grand piano and fit it in there. That was her style." When Miriam passed, age 99, and his mom asked if there were any of her possessions he wanted, Brian felt drawn to her super-seventies receiver and speakers.

He gestures to the wall of shelves behind the bar, and there they are, nestled among the bottles. "When I knew I was gonna be naming this Bar Miriam, I'm like 'This is so perfect.'" There's a painted toy piano up there too, a shout-out to Grandma Miriam, with a tiny framed photo of her sitting on top. Miriam being repped variously on the liquor shelf. Meg van Huygen
Her namesake bar is a co-jam between Smith and Chef Cody Westerfield, formerly of the similarly decadent-but-comfy Lecosho (RIP), where he and Smith worked together. Westerfield's menu at Bar Miriam features some modest classics in the style of Lecosho: seared scallops, wild mushrooms on toast, a thoughtful charcuterie board, oysters on the half.

Smith's professed obsession with community extends to his crew; he says he has "an embarrassment of riches" when it comes to his staff. He's proud to offer 100 percent employer-paid benefits at both bars, which he says he continued to pay when Baker's was temporarily closed in 2020.

Both Bar Miriam and Baker's have a low-ABV section of the cocktail menu, speaking of modesty, and Smith doesn't explicitly say so, but it seems to me like any of them could be made without any alcohol at all and still be delicious. The much-touted Funky Diabetic has frooty Mai Tai vibes, with white port, citrusy-herbal Wilderton Lustre, pineapple, lime, orgeat, and angostura bitters—the port is the only alcohol in the glass. You also get a flower. Who needs booze when you have a flower in your drink. A low-ABV Funky Diabetic + Grandma Miriam c. 1941. Photo by Meg van Huygen
The more you sit, the more you see the dichotomy. Hiphop is on Miriam's stereo, punctuated with chatty laughter from the Saturday crowd. The cocktail list is immaculate, echoing chi-chi bars like Foreign National or Canon, while the space itself is no-frills, with regular bracketed shelves built right into the wall behind the bar to hold up the liquor. But they're clearly big liquor nerds here; the bottle collection is loaded with arcane stuff.

As at Baker's, I'm mesmerized. I can't help asking what such-and-such is, which usually involves them taking the bottle down and giving me a session on Tempus Fugit and ancient absinthe-producing regions of France and Switzerland, or how Paranubes rum's flavor is so unique because it's made in the cloud forests of Oaxaca. Meanwhile, the couple behind me mops up something saucy with heavy brown bread, eating with their hands, straight out of a tavern scene in D&D. 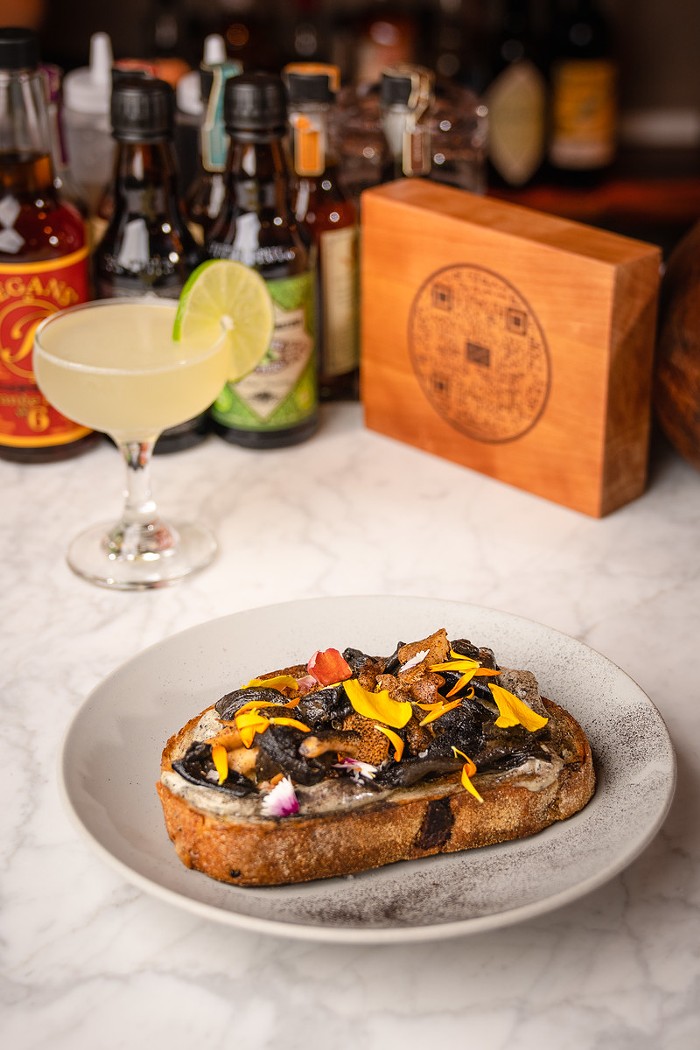 Mushroom tartine with beef fat and berbere. Photo by Thor Radford/Radford Creative
Why can't your local bar be both comfortable and beautiful? Why don't we see that in this city? Maybe there's an assumed snotty barrier to entry, where if the bar does craft cocktails with nerdy imported bottles, then people won't feel like they can chill? I think that's false. I think you can have both at once, casual and exquisite. They're not mutually exclusive. In fact, they're partners—they're stronger together.

I tell this to Brian and he nods, shaker in hand. "I love the concept of having your local hangout spot being almost a little too good."