Probably my favorite bit of neon in the city. XO
Some time after Capitol Hill's beloved little ("little" as in 830 sq. ft little) brunch spot announced its "Glow Up" campaign to fund construction of a much bigger spot elsewhere on the Hill, an anonymous donor dropped $50,000 on the mission. The donation nets the generous contributor an exclusive lifetime "SPEED PASS," which allows them and three guests to skip to the front of the diner's famously long line whenever they want. Aside from the TSA pre-check for mimosas, the donor also scores free breakfast for four at the new location for the next two years.

In a phone interview, Julie Reisman, owner of the 35-year-old institution, said the contributor didn't say much, just that they loved the neighborhood and loved the idea of investing in the culture of the community, of which Glo's is very much a part. She encouraged anyone else who loves investing in the culture of the community to chip in (or drop some serious cash) as the restaurant continues working to reach its goal of raising $350,000 before April 15. So far, the campaign has raised nearly $203,000.

Much higher-than-expected construction costs (thanks, pandemic) prompted Reisman to try to crowdfund the overrun. As Capitol Hill Blog reported earlier this month, Reisman has already tapped friends and taken out loans to bank the move. If they fall short of their goal, "We’ll scrap for it, but it never hurts to ask," she said.

Reisman decided to make the move last year after she was told the property owners planned to sell. "We were either going to let this happen to us or make it happen for ourselves," she said, and so she decided to try to make it happen. 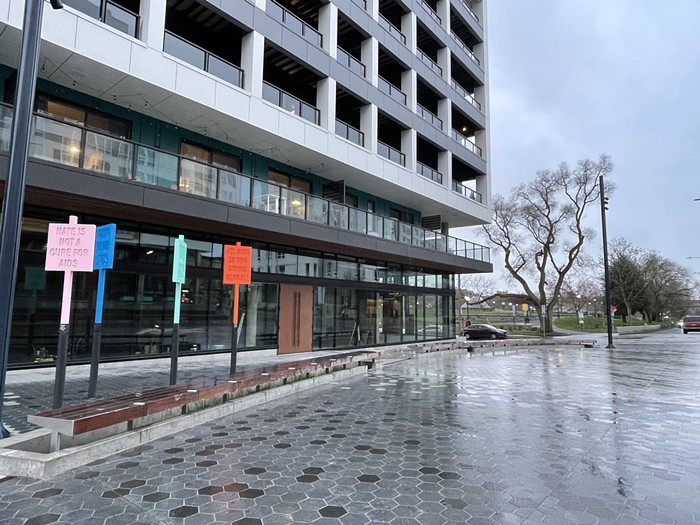 The place where it will happen. XO
The new place on Broadway doubles the indoor space Glo's will be working with, which means the days of butts in faces and bathroom-adjacent seating will end. The larger area, built out by the capable hands over at Mētis Construction, will mean that Glo's can cater to both larger and smaller crowds than they do now. A breakfast counter will serve solo diners only, and booths and banquet seating will fit groups of six, eight, or even ten. An outdoor deck will seat even more.

The food and drink offerings will also expand. Reisman plans to offer espresso and a limited cocktail menu featuring brunch classics such as Mimosas and Bloody Marys.

Proximity to the farmers market and the park will also help the restaurant's community meals program evolve. For the last couple years, staff members offered free meals and coffee to people in need, including houseless neighbors and even first responders beat from a shift. Customer donations fund the program, which handed out 6,500 free meals over the course of the last couple years, according to Reisman. In the new place, she hopes to partner with the market to help feed people, offering her kitchen and staff to cook and distribute donated food.

Barring the start of World War 3 or another deadly variant of concern, a successful fundraising campaign will put Glo's on track for an autumn opening date. If you want to give this pretty little breakfast sandwich factory a boost, then drop your dollars here.