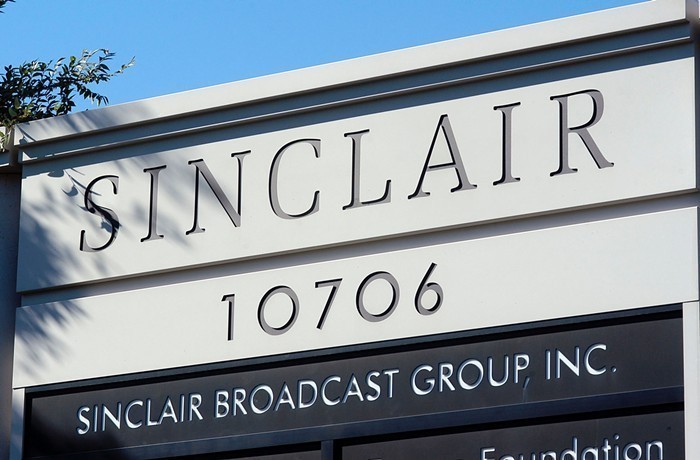 The Tweet in his thread that drew the most criticism included a slideshow set to a song called “We’ll Have Our Home Again,” which was reportedly written by “a white separatist, ethno-nationalist men’s club" and used as an anthem at some recent Proud Boys rallies, including the one on Saturday.

Over the weekend, Choe ignored requests for comment on the slideshow and then blocked journalists and other inquiring minds on Twitter, but today he published a Medium post that purports to tell his side of the story.

The post weaves together defensive whataboutisms with apparently genuine attempts to clarify his intentions, all while framing bothsidesism as a stand-in for objectivity. Conservative reactionaries often use these strategies to present themselves as voices of reason, and it's tiresome.

But anyway, before he launches into his narrative, he begins with a misleading title: "I GOT FIRED FOR LIVE TWEETING A PROUD BOYS RALLY."

The idea that KOMO fired Choe only for "live tweeting" a Proud Boys rally does not appear to square with reality. As I reported on Monday, KOMO news director Phil Bruce sent out two emails earlier in March warning staff not to violate certain company policies. The day after Choe appeared on right-wing radio host Dori Monson's show, Bruce sent out an email reminding reporters not to do interviews with other outlets without approval. The following week, after Choe published several Twitter threads covering sweeps of homeless people downtown, confrontations with antifascists, and random arrests, Bruce sent out another email warning journalists against posting or retweeting posts "that do not share our professional standards," though that email didn't point to any specific examples. And then the week after that, Choe tweeted out the apparent Proud Boys PR and got canned.

On top of that, three sources say Choe openly spoke of wanting to get fired, one source said another local news station rejected his recent application to work there, and two sources say all KOMO photographers wrote letters to the news director saying they did not want to work with Choe anymore. Choe denies wanting to get fired and says he "worked with a KOMO photog until my very last day."

In any event, moving past the title, the story he tells in the Medium post goes as follows. He claims the prospect of violence breaking out between Proud Boys and antifascists lured him down to Olympia outside of work hours. The march, which he says was advertised as a "rally for America" (but which was really advertised as a rally to show "support for political prisoners" in jail for insurrection stuff), carried on largely without incident.

To wrap up his coverage for the day, he used audio that a Proud Boy blared from a speaker as a soundtrack for his slideshow. Though the audio would have sounded like a white nationalist anthem to anyone with two ears and access to cable news, he said he "could not make out the words and had never heard this song." Rather than serve as Proud Boys PR, the montage, he says, aimed "to simply capture a moment in time, with authentic visuals and sounds” and yet also "to be a conversation starter." "And it sure did incite an unexpected response," he added.

Setting aside those conflicting aims, it's unclear what response Choe expected from the montage, though the five paragraphs that follow his explanation half-assedly regurgitate a soft-brained bit of equivocation that Brandi Kruse scribbled out on her blog the other day.

In his version of her argument, Choe intersperses text with photos of burning cop cars from the May 2020 George Floyd protests in downtown Seattle. He goes on to argue that "antifa" is a violent group whose members want to kill cops and burn down precincts, and that he's been personally assaulted by "alt-left activists who claimed to be part of Antifa," and that the Proud Boys rally he tweeted about was peaceful, and yet he took flack on Twitter for "not being more critical" of the Proud Boys rally. Sounds like a "double standard" to him!

This argument is a bizarre string of non sequiturs. For starters, the actions of antifascist protesters have no bearing on the journalistic value of Choe's coverage of the Proud Boys on Saturday. Moreover, the relevant actor applying the "standard" in this situation is KOMO. KOMO did not take issue with the public response to Choe's 2020 protest coverage, but the station did apparently take issue with the public response to his recent Proud Boy coverage. So they thought he did a good job hyperventilating about antifa property damage, but they thought he did a bad job when he failed to contextualize the Proud Boys as a terrorist hate group. I see no double standard.

Of course, the argument he was trying to make was the one about people on Twitter — and even people in the mainstream media!!!! — handling Black Lives Matter protests with kids gloves but bringing down the wrath of Cancel Culture on Trumpy far-right protests. But he didn't quite get there, and I won't waste any more time dismissing it in a country where Kyle Rittenhouse is out here collecting sponsorship deals.

Moving on, Choe also claimed people on Twitter "started pouncing" on him for the Tweet within "hours," and before he could get a chance to respond, his news director told him to remove the post and to decline media inquiries. Over the phone, Choe also said his boss told him to block journalists on Twitter. He then claims KOMO fired him the following day, which would have been Sunday.

KOMO's news director declined to comment on that timeline. That said, the timeline doesn't hold up to much scrutiny. Choe did the Proud Boys PR tweet Saturday. He immediately started getting shit for it. If he read that criticism and determined that he'd been misunderstood, he could have done the normal thing and deleted the tweet, apologized for the miscommunication, and moved on with his life. I didn't ask him for comment until Sunday, and he didn't block me until much later on Sunday, so if his boss told him to decline inquiries, block people, and delete the tweet all at the same time, then that didn't happen on Saturday.

The closest thing Choe offers in terms of self-criticism comes at the end, when he says, "I may have missed the mark with my on-line coverage. But please know, it was never intended to amplify or legitimize any ideology or worldview."

So that's it. He didn't intend to produce Proud Boys propaganda.

In the future, Choe claims he'll stay on in Seattle media. Judging by his post, it sounds like he plans to rebrand as a bridge-divider, all while re-tweeting right-wing activists such as Chris Rufo. Magnifique.