The space oddities came to Clock-Out Lounge on Saturday with somesurprises.

Any band that has the stones to walk onstage to the strains of Joe Meek and the Blue Men's “I Hear a New World” is raising expectations astronomically—assuming people in the crowd know Joe Meek, which is not always a certainty in 2022.

The multi-national ensemble Vanishing Twin did just that Saturday night at Clock-Out Lounge. They flexed the chops and outward-bound sensibilities that would've impressed the late, innovative producer.

Led by English vocalist/guitarist/keyboardist Cathy Lucas, Vanishing Twin, roughly speaking, meld the haunting melodies and spaced-out vocal auras of Broadcast with the incisive funkiness of Heliocentrics. (It makes sense that the latter group's Malcolm Catto has produced several VT records.) So, if Vanishing Twin aren't exactly formulating new sonic worlds à la Meek, they are assimilating elements from two of the greatest bands of the last quarter-century and lacing their own intriguing idiosyncrasies into them. 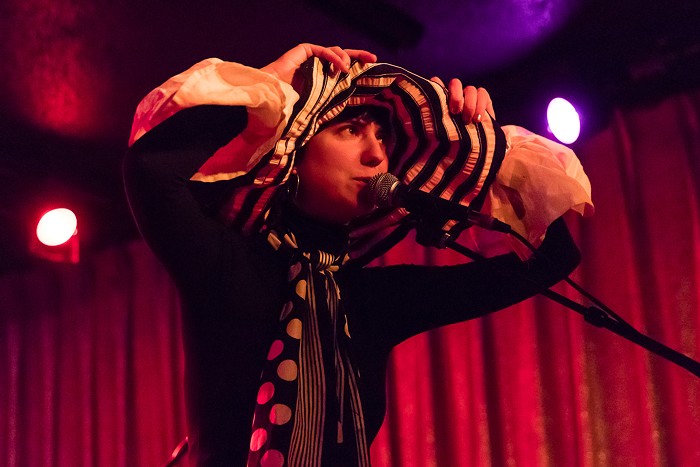 Before launching into an eerie shuffle of “Big Moonlight” from their 2021 magnum opus Ookii Gekkou, Lucas announced that this North American tour has been two-and-a-half years in the making. (Thanks, Covid.) But don't think that this meant Vanishing Twin were going to jump around and exhort the punters to make some fucking noise and whip them into a frenzy. No, they're too cosmically cool for that, thankfully. Instead, drummer Valentina Magaletti (Tomaga, Raime), synth wizard Phil F.M.U., and bassist Alana Asha Amram (a Hunx & His Punx member subbing for Susumu Mukai on this tour) let their music stealthily levitate spirits and coax understated dancing. Anyway, Lucas's incantatory, sotto voce singing isn't made for fist-pumping, but rather eyes-closed reverie.

Opening the lengthy encore, the swaying, oneiric “Telescope” proved that Vanishing Twin could conceivably invade the charts, if a number of improbable things occurred and the stodgy gatekeepers suddenly opened their minds a smidgen. The set ended with “Cryonic Suspension May Save Your Life,” a marathon psych-prog journey to the end of your mind that took on the air of an ELP opus (you better believe that's a compliment), before finishing with a cataclysmic climax that recalled Can at their most chaotic—a fitting klieg-lit exclamation point to the performance.

If I have one quibble with the show, it was the relatively low volume of the music, which muted its interstellar arcs and subliminal, dubwise motion. I couldn't have been the only one who wanted those Korgs, Yamahas, and Eventides to radiate with more vibrancy. A headlining act from overseas on a Saturday night deserves maximum loudness. Nevertheless, Vanishing Twin won over the nearly full Clock-Out Lounge, and I suspect the next time they touch down in Seattle, it'll be at a much larger venue. 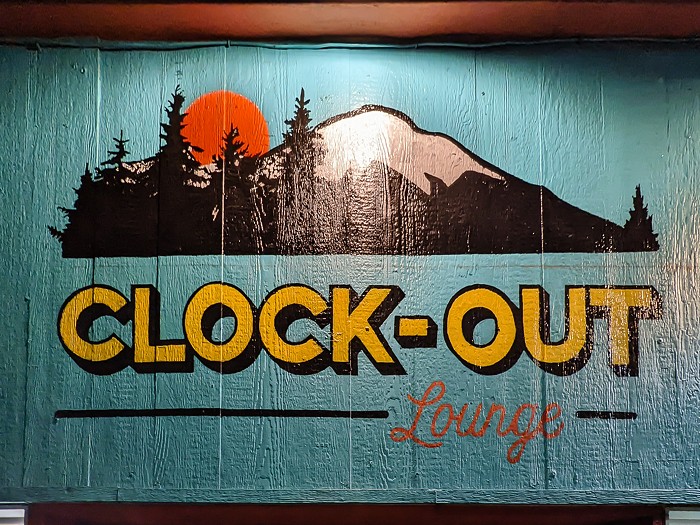 Due to a Covid-related illness in the original opening act, Sonoda, Seattle quartet somesurprises were called in as substitutes. It was a fortuitous turn of events, as the band—led by guitarist/vocalist Natasha El-Sergany—perfectly set the scene for Vanishing Twin. As evident from their first track of the night, somesurprises have become masters of rock as Autobahn-ed hypnosis. Taking inspiration from the Velvet Underground's “Foggy Notion” and Neu!'s “Für Immer,” they build an undulant, motorik groove anchored by drummer Nico Sophiea and bassist Laura Seniow, dotted with subtle crescendos and minute shifts in intensity, all of which one could gladly absorb for a half hour. El-Sergany's Gibson and Josh Medina's Fender guitars entwined in blissful cohabitation as the song shimmered like a mirage.

Many somesurprises songs begin in spectral, meditative mode, marked by El-Sergany's dulcet murmurs and velvety croons, only to explode into pummeling klangfests or accelerate into breezy, carefree cruising. This approach peaked on “High Rise” from their self-titled 2019 album on New York's Drawing Room Records. Even at their most clangorous, though, somesurprises exude a Zen calm that's highly unusual for a rock band. 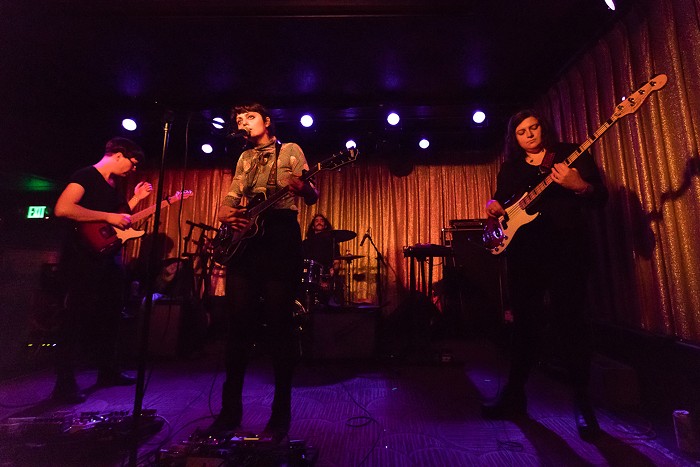 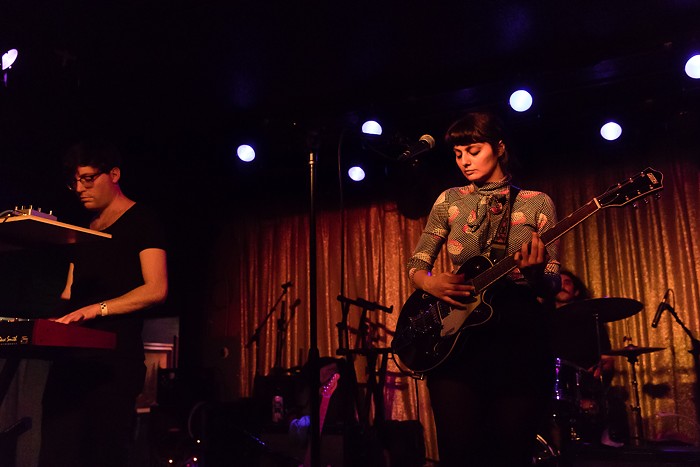 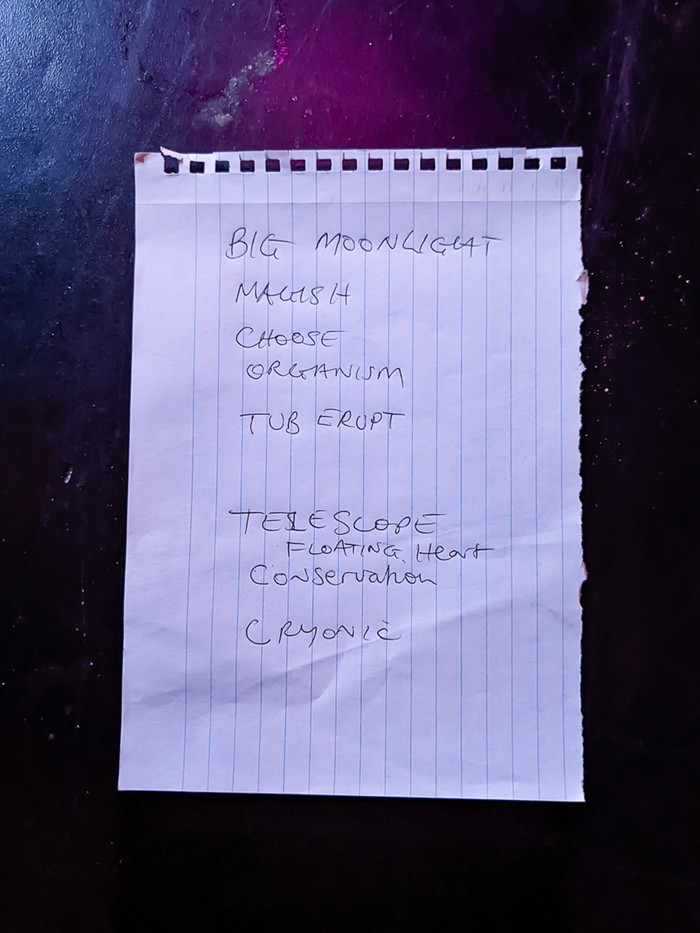 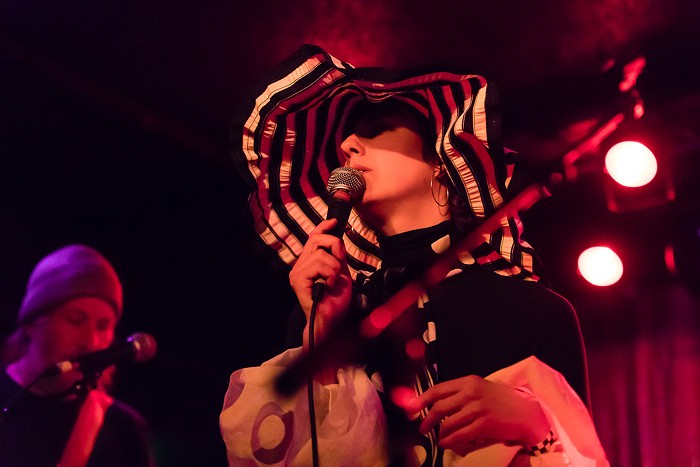