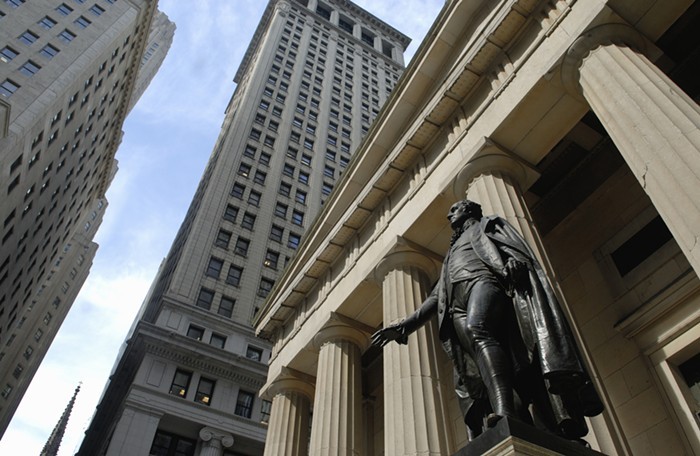 Washington's capital gains tax would only hit people who've reaped millions by putting their money into Wall Street, venture capital firms, and hedge funds. BO ZAUNDERS/GETTY IMAGES
Shortly after Tim Eyman failed his quest to block "personal income taxes" and repeal a new tax on capital gains all at the same time, a few wealthy conservatives launched a campaign to simply repeal the capital gains tax. If successful, the "Repeal the Capital Gains Income Tax" campaign, or I-1929, would strip away half a billion dollars per year for childcare and education. Luckily for the children, the campaign is already off to a bumpy start.
Sponsored

A complaint filed to the Public Disclosure Commission last week accuses the campaign of failing to disclose pledges in a timely manner, noting the sizable gap between its pledges and its debts.

According to the PDC, at the end of last month the campaign owed more than $100,000 in debts but only listed $45,000 in pledges from a couple rich guys and former Republican gubernatorial candidate Bill Bryant, whose goofy delivery of the phrase "I get it" in his 2016 TV ad has yet to leave my mind. In any event, the person who filed the complaint, Pam Johnson, pointed out that the gap between pledges and debts suggested that something fishy was going on. She argued that the consultants to whom the campaign owes money would not have taken on the work without knowing who was buttering their bread, and so the campaign must have given those consultants some assurances that the money was coming from one source or another. The failure to disclose those funding sources when they were pledged would essentially constitute a “secret pledge,” and thus potentially violate state campaign finance laws.

Johnson, who ran a 2013 statewide initiative in support of adding GMO labels to foods, took this opportunity to note that the capital gains tax repeal campaign owed nearly half of its money to three people connected to the "No on 522" campaign, which opposed her labeling initiative back in the day. That opposition campaign was funded by the Grocery Manufacturers Association, which was forced to pay an $18 million penalty after Attorney General Bob Ferguson sued them for deliberately concealing the sources of their funding. Those funding sources, of course, turned out to be a bunch of food and beverage companies who didn't want to label their products.

In this new complaint, Johnson called out Funk (who consulted on the "No on 522" campaign), Heather Clark (the treasurer for that campaign), and Peri Hall (a former vice president of Winner & Mandabach, a firm that took in a bunch of money from "No on 522") as "all associated in some way with the Grocery Manufacturers deception."

"Rather than the secret accounts and contribution laundering efforts at play in Grocery Manufacturers, here it appears the committee has found a new tactic: simply not disclosing pledges," Johnson wrote.

In an email, Funk dismissed the complaint and said the campaign "has and will continue to report all contributions, expenditures, pledges, debts and other obligations accurately and timely according to PDC requirements."

He added that campaign committees often carry debt "especially in the early stages," and said it was "fairly common" for vendors to "make decisions for themselves about whether they believe that a given campaign has the ability to raise money for or against a particular measure."

Funk also called the vague allegations of wrongdoing leveled at him, Hall, and Clark "a purely politically motivated misrepresentation of the facts," and said "no individual vendor or officer of Repeal the Capital Gains Income Tax has ever received a campaign fine of any kind nor ever been accused by the PDC or the AG of any wrongdoing or any PDC violation."

Finally, he said that the PDC had yet to notify the campaign committee of Johnson's complaint, but they nevertheless stood "prepared to comply fully with any PDC requests."

Speaking of pledges, a group called Invest in Washington Now, which lobbied to pass the capital gains tax in the first place, just launched a "decline to sign I-1929" pledge in the hopes of stifling the campaign's signature-gathering efforts. "A few super wealthy people are backing I-1929 because they want to rig the tax system for themselves, making the rest of us pay. That's just greedy and wrong. And we won't let them get away with it," Invest in Washington Now Executive Director Treasure Mackley said in a email.

What's shaping up to be a big initiative battle may become wealthy Washingtonians' last defense against a small tax that would only hit a few thousand people in a state of more than 7.6 million. Last Friday AG Ferguson asked the state Supreme Court to consider an appeal of a ruling from a Douglas County Superior Court judge who tossed the tax earlier this month on the grounds that it violated a state constitutional prohibition against graduated income taxes. If the Court overturns that ruling, then expect this repeal campaign to get real serious real quick as the rich scramble to avoid paying their fair share.