Behold, a very good sandwich. Meg van Huygen
Hattie's Hat is the only place on Ballard Avenue that doesn't make me mad these days. (Okay, the Tractor and the Lockspot get a pass, and the Smoke Shop would if it were still open, but that's about it.) Dimly lit, frozen-in-amber Hattie's is an essential respite from all the aggressive farmhouse cheuginess crashing in on you from all directions. On that block especially.

I hate to act like a big boomer about missing the good ol' days and drinking out of the hose, but it's hard to reconcile what we see today—the candy-colored condo wasteland of wizard-themed bars and 18-dollar pho—with memories of my Metro driver dad telling me to avoid Ballard and Market because it's the sketchiest part of his route. Ballard had personality, though, when the loggers and fishermen could still afford to live in it. Big Olympia-flavored grit back then, maybe a little Fairbanks too. 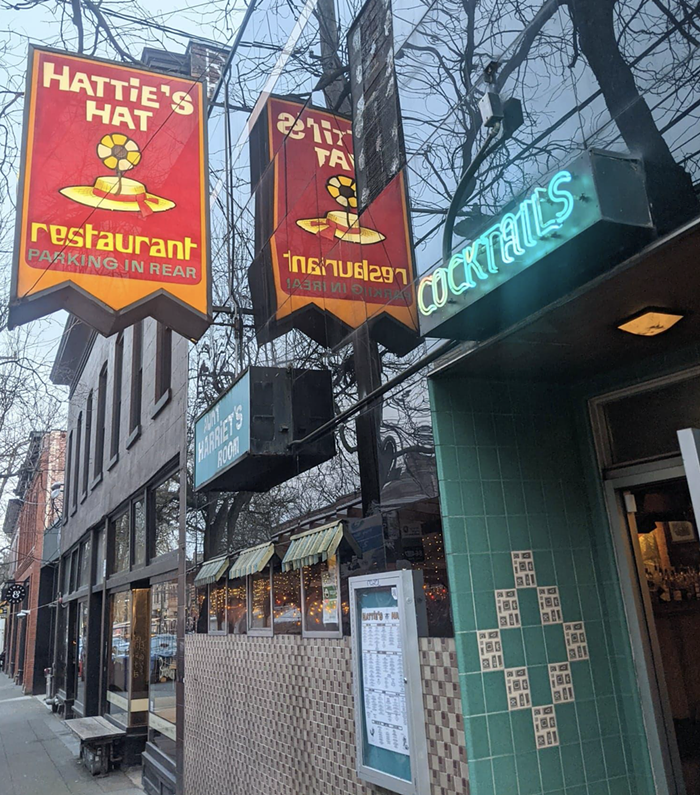 Oh, that tile. MVH
Hattie's Hat, at age 118, has somehow survived the neighborhood's transformation intact, and I'm just so grateful it's still with us. If you're new in town, know that this bar-restaurant is a crucial piece of Seattle's history and identity. First of all, it's in the last handful of divey holdouts with one of those ornately carved, four-ton wooden Victorian bars that were shipped around Cape Horn (probably) to the West Coast before commercial trucking or the Panama Canal existed. They serve food until midnight, and all of it's good solid roadhouse fare. Drinks are still cheap; pours are still stiff. The gorgeous century-old nature murals are still there and in good condition, somehow. They have a huge collection of VHS tapes stashed under the bar and one of 'em's always playing. The vintage cartoony signage outside, the patterned mid-century tile on the facade. The giant framed king crab on the wall. And it has a bell. How I love an old bar with a bell.

They famously serve breakfast food all day at Hattie's, including their stupendous chicken-fried chicken (CFC) and chicken-fried chicken sandwich. There are parts of each of these dishes that I love. I like to order the CFC sandwich for its crunchy salad and pickles (plus the Tillamook cheddar in the sandwich), but I also really like to order the CFC (with no sandwich) for its side of black-peppery country gravy. So! What I like to do is this... (Just go ahead and screenshot these orders now so you have quick access later.)

2. Add a fried egg for a dollar AND add a side of the country gravy.

3. Next: pour the gravy onto the bottom bun, under the chicken, like it's mayo. Don't put it on top or it'll run down the frills of the Romaine lettuce in rivulets and right back onto your hand.

4. Be generous with your gravy pour. Then dip your crinkle fries in the remaining gravy in the bowl. Honestly, their fries are standalone great, and you get a ton of those delicious little semitranslucent double-fried fry ends. You know how they get all fragile and crystalline? Yeahhhh.

5. Interestingly, one of the side options for the sandwiches is jasmine rice, and that's nice too, to dump the extra gravy over the rice, especially if you're really hungry. It's like having a second meal on the side.

6. Speaking of gravy dripping onto things, bring a hair tie, 'cause this one's sloppy. I went through three napkins on this doctored-up CFC sando last night and had to ask for two more. You're gonna end up with sausage gravy on your sleeves and in your fingernails, and you'll have to wash your entire face when you get home. It's okay. It's an interactive artwork. Immerse your body in this sandwich. Become it, as it becomes you. 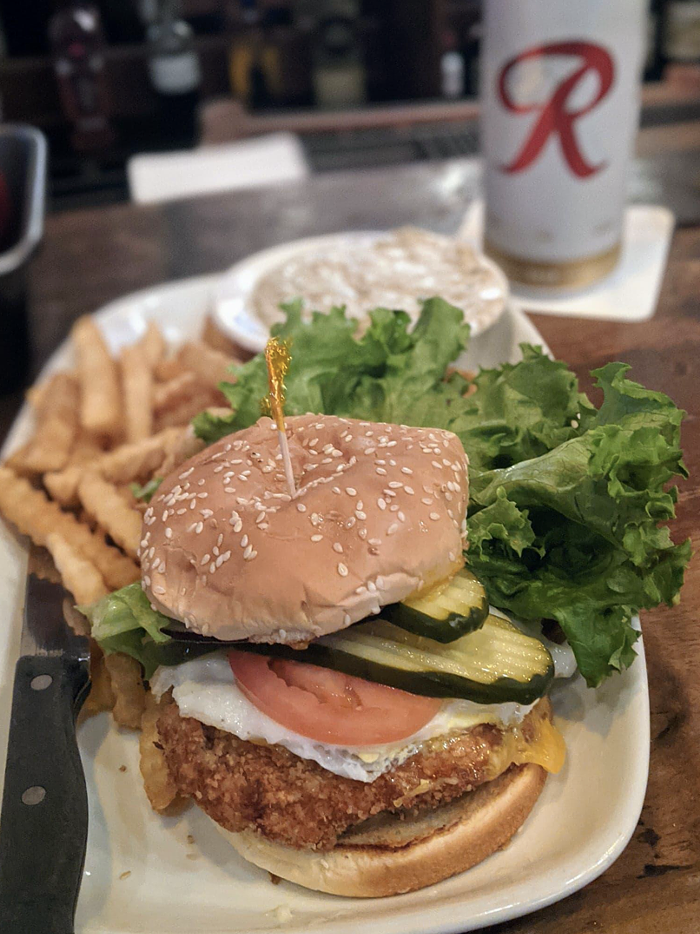 Before the gravening MVH
I consulted with my boyfriend, who ordered the also-very-good buffalo fried chicken sam, what makes this chicken-fried chicken versus just regular-fried chicken, and he suggested, with his mouth full: "Because it's not like fried chicken, you know, like A PIECE of fried chicken? And it's not like a chicken patty. It's a literal chicken breast, pounded out, like chicken parmigiana. So you can bite it without having to fight it, like at [redacted Seattle fried-chicken sandwich place]. It's tidy."

So, good UX design here, you're saying? With this particular fried chicken sandwich? 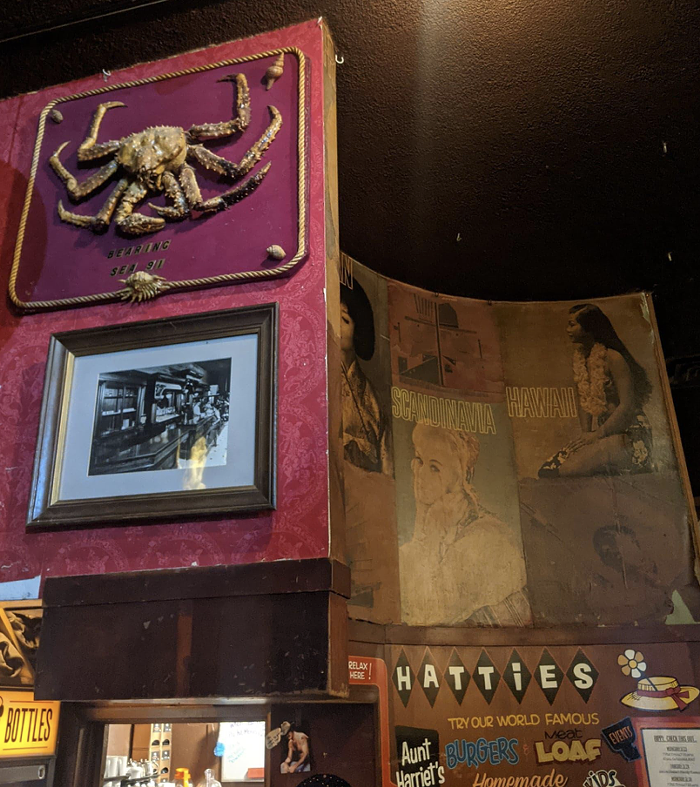 This crab graduated from the Bearing [sic] Sea, class of ‘91. MVH
Also of note: They don't go ballistic with the batter on the chicken. Some people think that adding extra dips in the batter makes for better fried chicken, but that just makes it greasier, with more breading to soak up more fat. Hattie's CFC sandwich is subdued: light batter, not too bready. This is true of Hattie's gravy as well. So often, people load down country gravy with flour or, worse, cornstarch, like that gloppy almond chicken sauce you see in bad Chinese American takeout. Obviously, there's flour in this too, but the country gravy at Hattie's tastes primarily like sausage and pepper and milk. Not flour.

Okay, that's it. Go there and eat this sandwich. Or go there and order whatever you want. I don't care—everything's good! Because, as Ballard Ave continues polymorphing into Bellevue Square, we need Hattie's Hat to be there forever, more now than ever before. 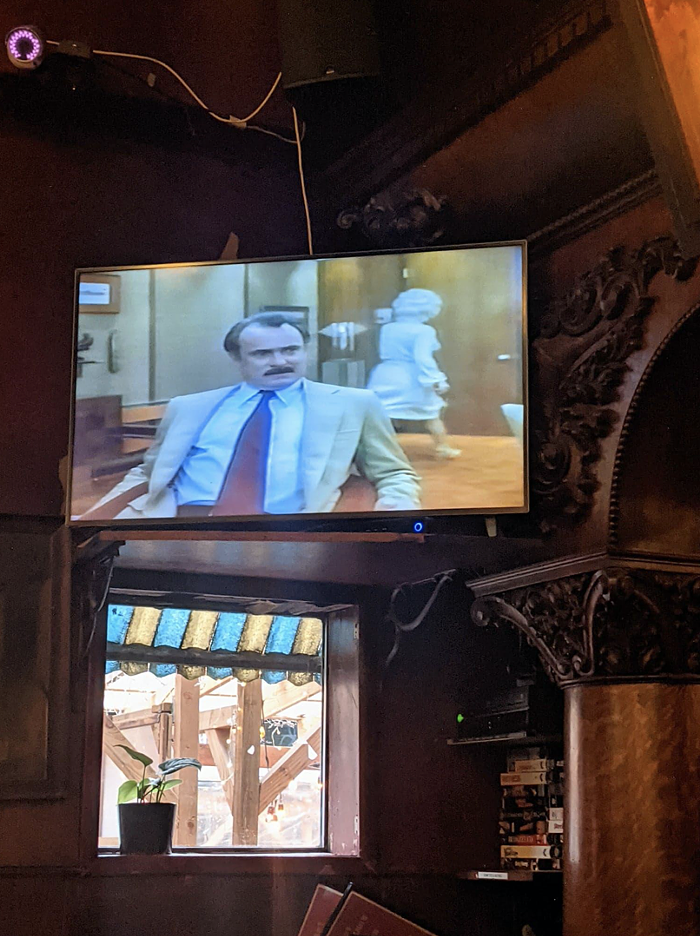