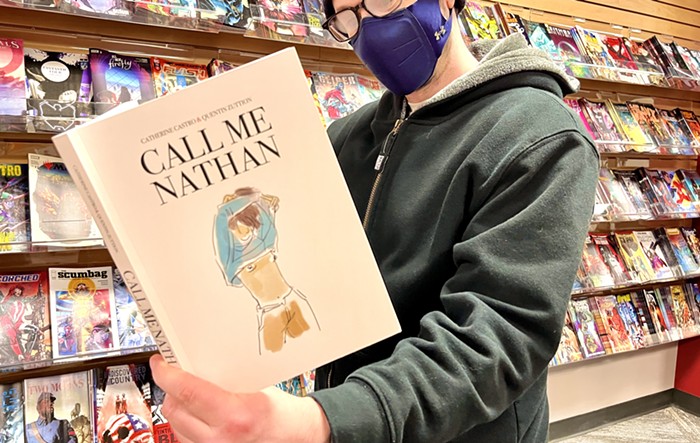 Behold, the Spider-Man that THEY don’t want you to see! And by THEY I mean annoying old white guys who can’t bear the thought of any media that isn’t all about them. From the kind of person who brought you “I can’t watch Turning Red because the main character is an Asian girl” comes “I can’t read Spider-Punk because he tells Nazis to fuck off.”

Spider-Punk is a real hoot, and this week’s Issue #1 has brought out the tiresome takes that it’s mean for stories not to center the same demographic that’s been starring in comics for a century. Spider-Punk kicks Nazis’ ass, looks askance and captialism, and has a great diverse band backing him up. I’d include it in the longer roundup but Marvel’s weirdly touchy about comic reviews so oh well.

Fortunately there’s plenty more good stuff on shelves this week — thanks as always to Phoenix helping to sort through the good and the bad. 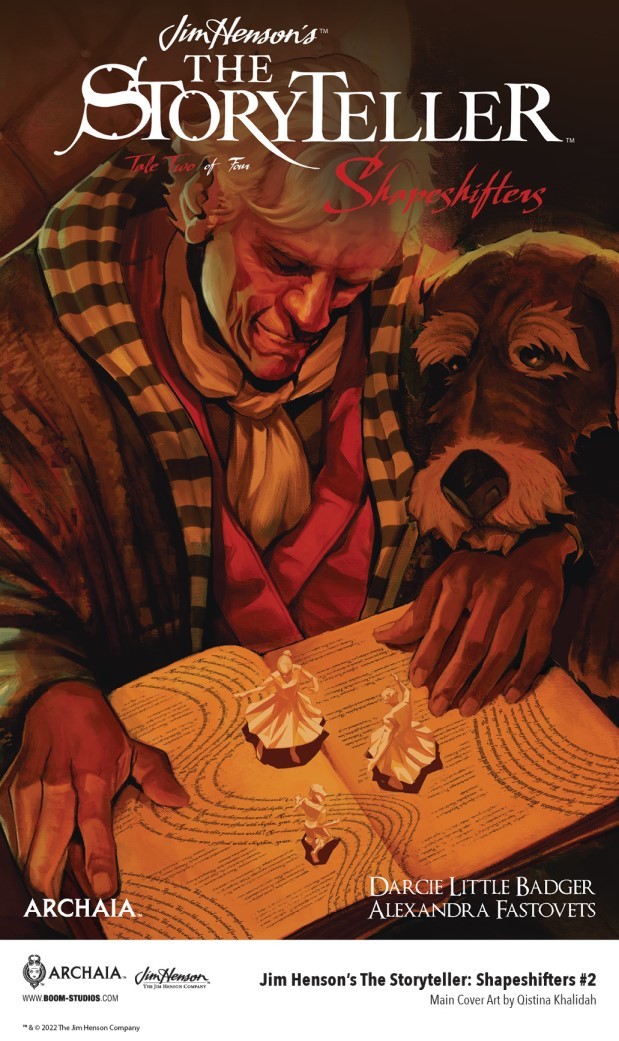 I don’t envy the challenge faced by writers of this anthology series, who must compress an entire myth into each compact issue. While I thought the first issue was too much summary and not enough scene, this one gets closer to the right balance in a tale about a little girl whose mysterious forest-friends teach her a powerful, forgotten dance. I wish there was more information — even just a sentence or two at the end — about the culture from which these stories were adapted; the only apparent nod to the story’s origin is in a single word, xastéyó, which I had to go looking online to learn more about. (The context in which I mostly see it used is as an Apache word for “thank you.”) The story at the heart of this issue is about preserving cultures threatened by colonizers, and I think there’s a missed opportunity in the series not doing more to participate in that work.

ALICE EVER AFTER ISSUE #1 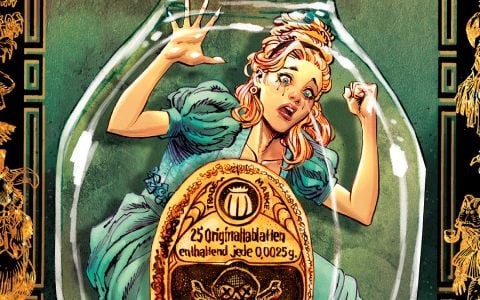 There’ve been a billion variations on “what if Alice in Wonderland, but dark and edgy,” but so far I like the direction this one’s taking. It’s vaguely-Victorian times, and a young lady named Alice is the black sheep of the family: Addicted to psychedelic pills, caught in the thrall of a petty criminal, and prone to hallucinogenic flights of fantasy. Alice’s life is spiraling down into a sad pit from which she may never escape — until she concocts a scheme that involves checking herself into the Sacred Heart Hospital. The soul of the story is revealed when we see her drug-induced fantasies, which take place in a more innocent and kind world; alas, in Alice’s life, compassion has only ever existed as a figment of her imagination. Witty visual references to the original novel abound (keep your eyes peeled for rabbits), and unlike so many other Alice adaptations, our heroine isn’t just a helpless pinball getting bounced from one plot contrivance to another; she’s an active participant in the proceedings. I could have done with maybe 5% less dialogue, especially from the nagging family (we get it, they’re stuffy and mean); but a wonderful use of color and some deliciously gothic visual perspectives push this first issue to five stars.

THE OCEAN WILL TAKE US ISSUE #1 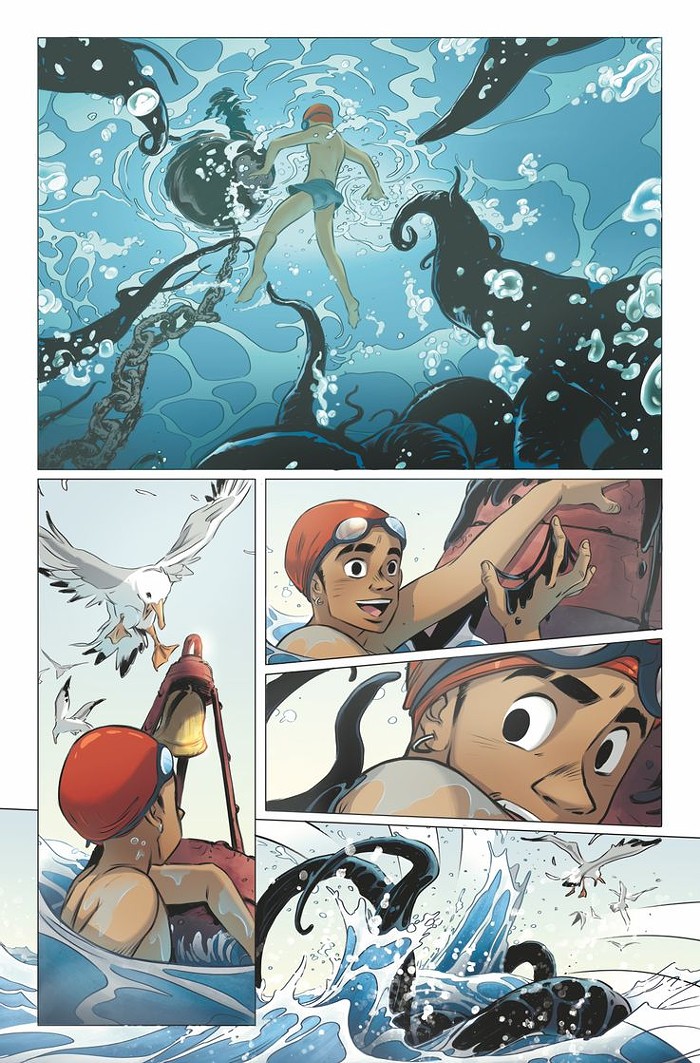 A touch of Riverdale with a dash of Yuri on Ice and maybe a little The Thirteenth Year gets you in the neighborhood of this wonderful teen paranormal mystery about a young champion swimmer who moves to a new town and begins to suspect that something’s amiss about his school’s swim team. Fans of ‘80s high school buddy movies will be delighted by the masterful application of character tropes — the mean dumb jocks, the mostly-harmless nerd, the bad girl, etc. — with enough modern tweaking that they don’t feel like retreads. And if I can be allowed to add one more reference, the mysterious is-there-or-isn’t-there monster (???) that lingers just at the edges of the frame calls to mind the best episodes of early X-Files. Also a joy: The artwork, which impressively captures the distinctive forms of competitive swimmers while also lending dynamism to poses even when characters are just strolling across campus. Even the lettering is well-placed, with fun sound-effect treatments throughout. Immersive; exciting; with just the right balance of supernatural wonder and relatable teen angst.

ALSO: MAGIC SPACE GIRLS, VAMPIRE COWBOYS, and TOO MANY BATS If you’re in the mood for fantasy, Wingbearer is a beautiful middle-grade story about a superhero girl. Check out Call me Nathan, a memoir about transitioning; and A Quick and Easy Guide to Asexuality which is exactly what it sounds like. West of Sundown is a vampire western told in grindhouse style, and STRGRL gives us a magical-girl space adventure. From Marvel, we’ve got an X-Men issue with Storm ruling Mars and a Marauders with pirate mutants; DC has Batwoman in the Arrow-verse, Batman in the Flashpoint universe, and a new Batman Beyond story. A good week for bats!