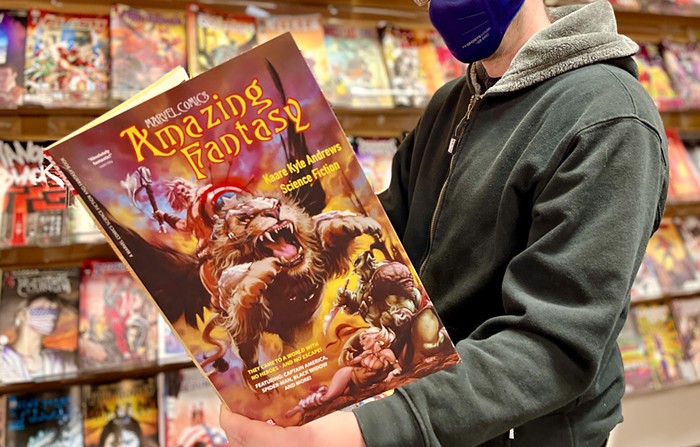 God, are we still doing NFTs? Just when it seemed like The Discourse(™) was moving on, Image Comics darkens our doorstep with a new comic book that has — for reasons that are completely mystifying — one of those apes on the cover.

I’m at a loss to explain the thinking here; as far as I can tell there’s zero connection between the NFT and the contents of the book, which is a tortured attempted comedy about the war on drugs. Fortunately, if you are among those who wish to avoid contact with cryptocurrency, this book is completely skippable. But my heart is sinking at the thought of now having to check future publications to make sure they’re not a part of that whole ecosystem.

The good news is that there’s far more good stuff to enjoy this week than bad. Of particular note is Brett Hamil’s new book, Sk8 Dad Summer, which is completely charming. (Jas Keimig has more on that release here.) Thanks as always to Phoenix for sorting through the week’s releases! 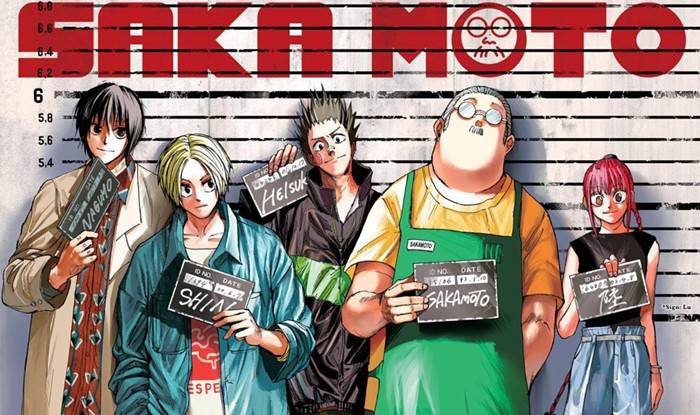 A fast-fun action-adventure, Sakamoto Days is the story of a hitman who left the world of crime only to be pulled back in. The twist is that in the intervening years our hero’s gotten adorably old, pleasantly fat, and quite placid — a far cry from the ruthless killer remembered by his underworld contacts, including a high-strung psychic who has come to kill the killer but winds up becoming his protégé instead. Even-keeled Sakamoto seldom speaks, and runs a humble convenience store with his wife and daughter; when violence is necessary, his weapons of choice are now the various sundries available to him in the aisles of his store. This affords plenty of opportunities for unexpected comic mayhem, particularly when teaching his perpetually-sweating new sidekick how to ring up customers while also employing deadly skills to defend the vulnerable. Great silly fun with creative visual gags and surprises on every page, and an excellently-written translation.
Rating: 🛒🛒🛒🛒🛒 (5/5)
Story and art: Yuto Suzuki. Translator: Camellia Nieh. Lettering: Eve Grandt. Touch-up: Anir Aharon. Design: Kam Li. Editor: John Bae. 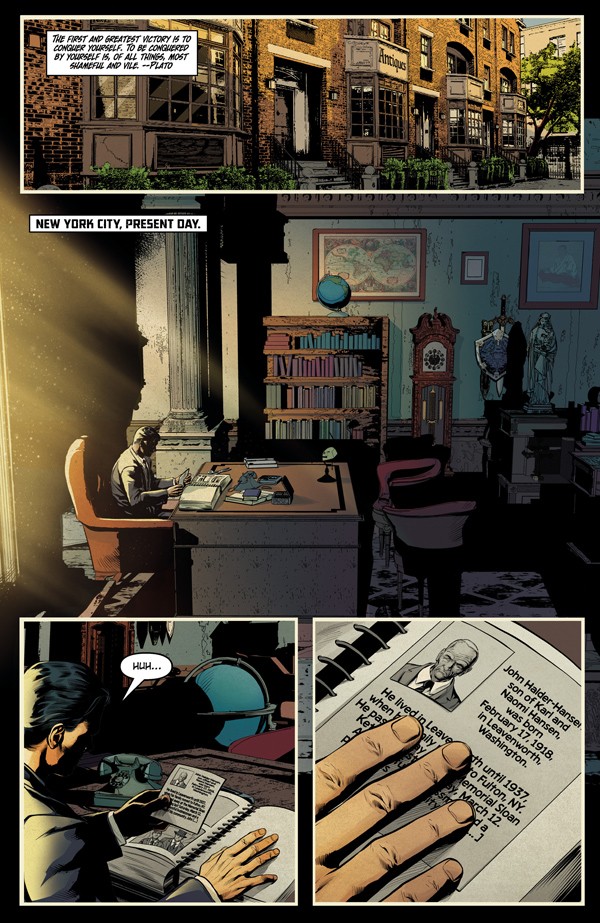 We get off to a slow start in this dark tale of life and death in a Japanese concentration camp. It is 1941, and two westerners fleeing the war are captured by Japanese soldiers and bundled off to a work-camp, where they are subjected to sinister medical experiments. Our hero is dragged from place to place, doing very little aside from narrating his discomfort; bizarrely, the real protagonists are the evil scientists who treat the prisoners as their property to experiment on, concocting elaborate schemes to infect their subjects with a novel pathogen. They are, of course, the bad guys, but they’re far more interesting and active than the sit-around characters we’re meant to be rooting for. Nice crisp art elevates the book with attractive, precise line work and creative panel layouts. Beyond that, this feels more like a prologue than a real first issue.
Rating: 💉💉💉 (3/5)
Writers: Will Conrad, Rod Monteiro. Artist: Will Conrad. Colorist: Marco Lesko

THE SECRET HISTORY OF THE WAR ON WEED 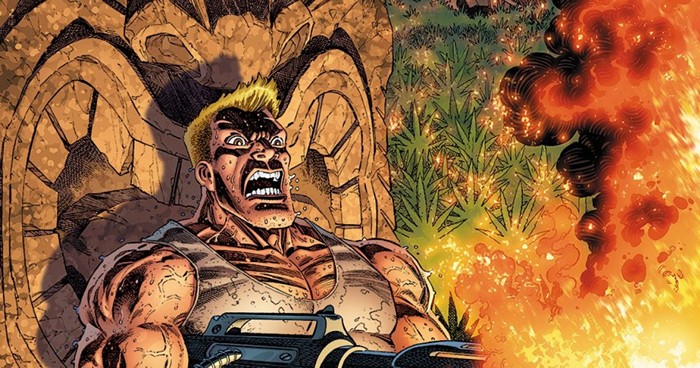 The story of whatever went wrong with this book is probably much more interesting than the book itself, which amounts to about two pages’ worth of jokes spread in a microscopic layer across 48 pages of filler with — of course — an NFT-connected cover. An ‘80s action hero is called upon by blowjob queen Nancy Reagan to eradicate a community of pot farmers, but plans go awry when the farmers capture him and open his mind with a particularly strong dose of weed, transforming him into a bloodthirsty defender of cannabis. The tale is woven with ludicrous violence, absurd action-hero catch phrases, and goofy eye-bleeding psychedelia, an obvious attempt to be deliberately over-the-top. But if there’s one sure-fire way for attempted camp to fail, it’s doing it on purpose. A handful of jokes land with, at best, a light chuckle (e.g., a pun about “private property” being the name of a soldier killed in Vietnam), but the lol-so-random story, if it can be called that, leads nowhere that couldn’t have been accomplished with a doodle in the margin of Mad Magazine. The final insult is the inexplicable decision to print some random bored ape NFT on the cover. “Limited print run,” Image Comics boasts, “maximum of 2 per customer.” I salute their optimism.
Rating: (0/5)
Writers: Gerry Duggan, Brian Posehn. Artist: Scott Koblish. Colorist: Hi-Fi. Letterer: Clayton Cowles. 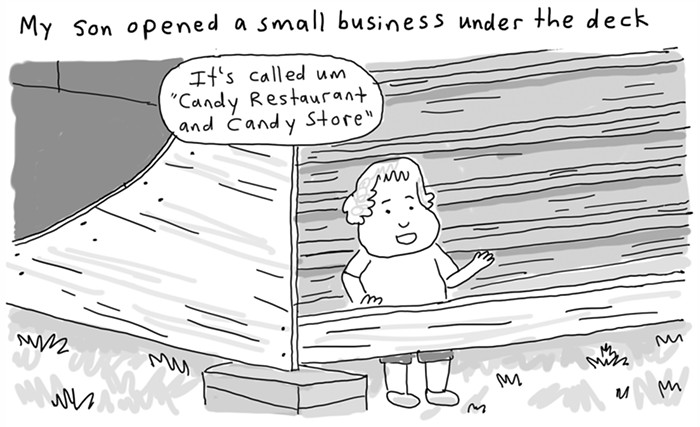 Our own Brett Hamil has a new book out called Sk8 Dad Summer that is a true delight — an autobio story of having one foot planted in fatherhood and another on a skateboard. Marvel has given a well-deserved big-print treatment to Amazing Fantasy, a fun pulpy adventure; and there’s a new Captain America starting up that features two CAs. Dark Beach is an intriguing sci-fi dystopia; and there’s some gorgeous watercolor art in Corollary, a sci-fi story about a universe in which everyone has a twin … until one person suddenly doesn’t. Also worth a look is Marvel Multiverse Role Playing Game, a still-in-playtest tabletop RPG for superhero enthusiasts who miss City of Heroes.
Comments 1
Tags: Picture Books