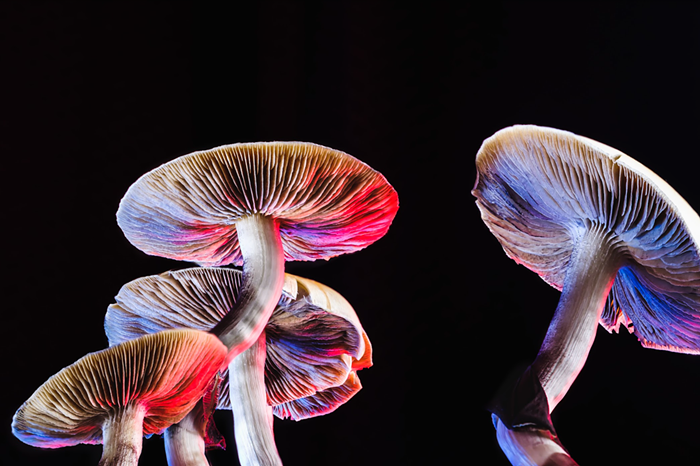 ALEXANDER VOLKOV / ISTOCK / GETTY IMAGES PLUS
It’s T-minus 256 days until Oregonians can legally start tripping, and the state's still deciding how best to manage the production and administration of psychedelic drugs.

In 2020, Oregon voters passed Measure 109, permitting the use of psilocybin, the active ingredient in magic mushrooms. In the months since, members of a volunteer advisory board made up of invested parties—therapists, doctors, researchers, mycologists, and others—have worked on a framework for implementation with a deadline of Jan 2, 2023, when various production and facilitation groups can start applying for licenses.

But what does that mean, exactly? What will psilocybin administration look like? What will a treatment session cost? Is it technically even considered a treatment? Who trains the facilitators, and how?

We spoke with Mason Marks, who spent a year serving on the board, to help demystify the messy intersection of policy, equity, science, and psychedelic drugs. Marks is also the project lead on the Project on Psychedelics Law and Regulation at the Petrie-Flom Center at Harvard Law School.

First, a disclaimer: The Oregon Health Authority (OHA)’s Psilocybin Services Section hasn’t finalized any of the proposed framework. These answers are based on the draft rules released by the OHA in February, and they could change before the full program is adopted by the end of the year.

I'm in Oregon and I want to try psilocybin therapy. What should I expect?

Short answer: Three appointments. One for preparation, one for drug administration, and a third for integration.

Long answer: Facilitators will need to meet with recipients before the actual drug trip so they can brief their clients on what to expect. The second appointment is the actual trip, which lasts for several hours, and the third appointment is for integration—talking through the experience with the client to help them make sense of it.

Outside that framework, individual facilitators appear to have quite a bit of leeway in how they choose to conduct their sessions. For example, a Catholic priest would likely have a drastically different approach from a medical doctor, Marks said. Some facilitators may choose to conduct their sessions outdoors; others may lie their patients down on a coach with a blindfold and headphones.

“The common theme is that when they facilitate a session, they’re supposed to do so in a nondirective measure,” Marks said. “They’re not supposed to steer the experience for the client. They’re there in more of a supportive role.”

A remaining question is the protocol for microdosing, or taking a very tiny dose that doesn’t result in a full dissociative trip. There’s nothing in Measure 109 that explicitly bans microdosing as part of Oregon’s psilocybin program, but so far there’s no real guidance for what that might look like either.

“People might be able to arrive for that administration session, receive their dose, and then be able to leave within a shorter period of time—maybe a half hour or an hour, instead of five or six hours,” Marks said.

How much will psilocybin sessions cost?

Long answer: One major critique of Oregon’s pending psilocybin program is that sessions will probably cost more than the average person can afford.

“This will definitely not be covered by insurance for clients. That's just not going to happen,” Marks said. “Cost will be a significant barrier to access, because in all likelihood, it’s going to be very expensive.”

One facilitator training course, offered by Dutch psilocybin retreat company The Synthesis Institute, costs $21,500. The company already has a foothold in Oregon—last year one of its co-founders purchased a 124-acre property in Ashland for $3.6 million. (The former chair of the OHA’s advisory board, Tom Eckert, resigned last month after disclosing his personal relationship with Synthesis CEO Rachel Aidan.)

Another factor driving up the cost for potential clients is tax liability. A federal statute bars companies that deal in Schedule I and II drugs from claiming major tax deductions, an issue also faced by the state’s cannabis retailers.

So how much should you budget for your trip? TBD. A useful comparison is ketamine infusion therapy, which also requires providers to spend several hours with the drug recipient. Costs for a single ketamine session usually range between $700 and $2,000.

What forms of psilocybin will be available?

Long answer: For the sake of keeping it simple, board members elected to pick one type of psilocybin. They’re leaving the door open to expand the program to other types down the line. Of the 200 different kinds of magic mushrooms, psilocybe cubensis is among the most comprehensively studied and frequently consumed, and it appears to carry less potential for negative side effects than other varieties.

According to Marks, the OHA has decided to allow only orally consumable psilocybin. However, that remains a topic of debate and could change—some are worried about equity issues, especially for people who have conditions that make chewing and swallowing difficult.

Can I consume psilocybin at home?

Long answer: The psilocybin program approved under Measure 109 isn’t technically therapy, nor is it medical in nature. But it’s also not a retail system akin to the state’s recreational marijuana industry, either. Instead, it operates in a confusing space between—it’s available to adults without a prescription or a referral, but it must be administered by a licensed facilitator, within a licensed facility. There remains some discussion over whether exceptions should be made for home visits, especially for people undergoing end-of-life care who could benefit from a psilocybin session, Marks said.

Who is psilocybin for?

Short answer: Any adult who can afford it, pending the outcome of ongoing discussions on mental health.

Long answer: Measure 109 states that psilocybin should be available for “personal development,” meaning that it’s not restricted to prescriptive uses. But some members of the advisory board question whether the program should be barred for people with certain mental health conditions like schizophrenia, bipolar disorder, and some personality disorders. Before his resignation, Eckert had suggested limiting psilocybin access for people who had attempted suicide in the last six months, Marks said. It’s up in the air. But those restrictions likely won’t make it into the final framework.

“It was discussed pretty extensively on the board,” Marks said. “I don’t know how much the health authority wants to really get into making those decisions.”

When can I book an appointment?

Long answer: The OHA will begin accepting applications for psilocybin facilitator licenses on Jan 2, next year. But that doesn’t mean the program will be client-ready.

“You can imagine they’ll be flooded with hundreds,” Marks said. “I think it will take some time for people to actually get licensed and set up these businesses."

“Will medical psilocybin therapy be legalized? There, I think the answer is yes, probably, in a few years,” Marks said. “It will likely be only a particular formulation and treatment protocol.”
However, the psilocybin program established under Measure 109 isn’t intended to serve as any kind of clinical therapy. Even if medical psilocybin finds a federal path to legality, “that will have zero effect legally on Oregon’s system,” Marks said.

Comments 6
Tags: Drugs Portland Calley Hair
The Stranger depends on your continuing support to provide articles like this one. In return, we pledge our ongoing commitment to truthful, progressive journalism and serving our community. So if you’re able, please consider a small recurring contribution. Thank you—you are appreciated!
CONTRIBUTE NOW