Slog AM: Supreme Court to Rule on God, Egyptian Theater Workers Walk Out, and Boba Tea Festival Is Just Days Away 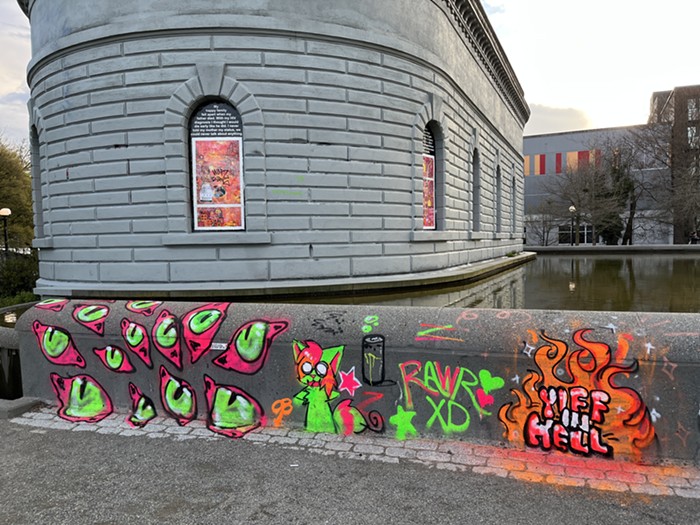 You'll have to yiff somewhere else now. This weekend city workers powerwashed the "yiff in hell" graffiti off of the side of the pool in Cal Anderson Park. Great, now where are we supposed to bring all our classy dates?

Some news about the Seattle International Film Festival from Stranger editor Chase Burns:

A SIFF walk-out: Last night, as the audience entered SIFF Cinema Egyptian for the Seattle International Film Festival’s closing night film, nearly all of the cinema’s hourly floor staff members walked out in protest. Around eight staffers handed out yellow flyers that claimed SIFF leadership wasn’t being transparent about “the future” of their employment and the company's "plans for the Egyptian." After the protest, workers who walked out told us they no longer had access to their work emails. We asked SIFF leadership for clarification and will update as we learn more. 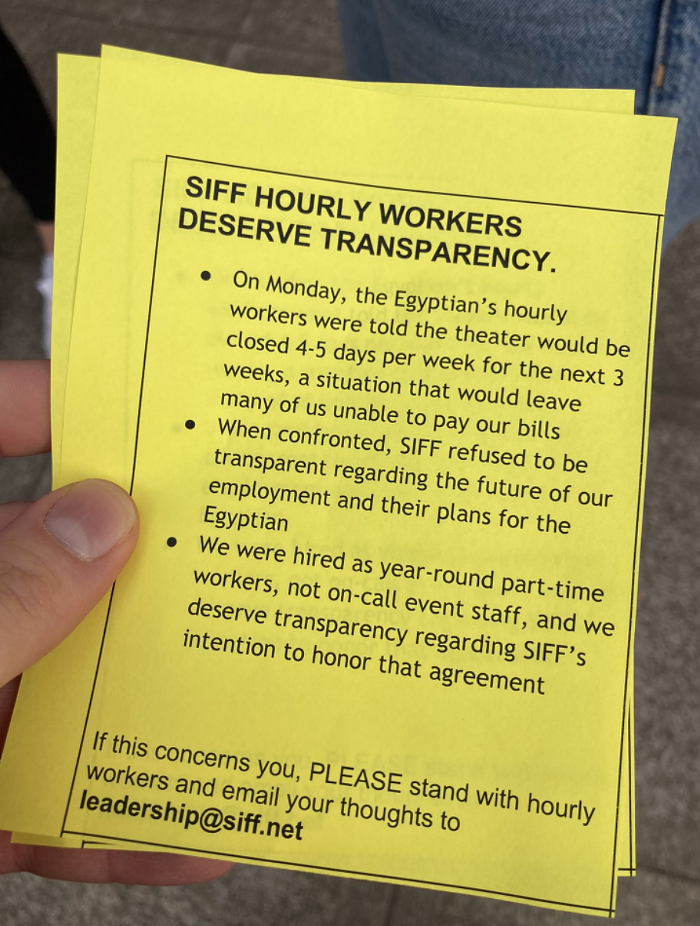 The flyer.
Some holes in the calendar: Floor staff at SIFF Cinema Egyptian said the company hired them for ongoing part-time work at the venue, which screens films throughout the year. They were surprised to find out last Monday that the Egyptian would be mostly closed over the next three weeks, apart from some scattered one-night event rentals. SIFF’s other two theaters (SIFF Cinema Uptown and SIFF Film Center) continue to screen films over the next few weeks, but an Egyptian staffer said floor staff tends to work at one venue.

Orrin Hatch is dead. You know what they say about speaking ill of the dead, so I’ll let him do the talking for me. I’ll always remember him as the guy who said that Democrats were “the party of homosexuals,” and that Republicans should be proud because “we don’t have the gays and lesbians with us.” Early in his career, he said, “I wouldn’t want to see homosexuals teaching school any more than I’d want to see members of the American Nazi Party teaching school.” Well, now he won’t have to worry about seeing either.

How should we remember Wynn Bruce? A climate activist died from his injuries after setting himself on fire on the steps of the Supreme Court last week. The news hasn’t gotten a ton of coverage, in part (I suspect) because it’s very challenging to report on it. As journalists, we generally avoid providing lots of detail about deaths by suicide, since that reporting can negatively impact public health. On the other hand, it’s clearly wrong to pretend it didn’t happen. What’s the right way to cover this tragedy? Well, we can start by amplifying the words of people who knew and admired him, and who will miss him terribly. And of course, help is available 24 hours a day if you or someone you know is in crisis.

This guy was my friend. He meditated with our sangha. This act is not suicide. This is a deeply fearless act of compassion to bring attention to climate crisis. We are piecing together info but he had been planning it for atleast one year. #wynnbruce I am so moved. https://t.co/bHoRaLK6Fr
— Dr. K. Kritee (@KriteeKanko) April 24, 2022

Speaking of climate … India and Pakistan are experiencing a deadly heat wave that’s lasted two months so far, with temperatures reaching around 120 degrees. The region’s hot season hasn’t even begun yet.

Seattle sidewalks aren’t safe. A drunk driver killed a man walking on the sidewalk near Gilman Drive West at 15th Ave West on Saturday night, throwing the victim 30 feet to their death. And in Edmonds, a driver hit two children in a crosswalk, sending a 3-year-old to the hospital in critical condition.

Of course, the real money’s in playwriting. There’s a new poetry bookstore in town — Open Books has moved from Wallingford to Pioneer Square. The new space is a little smaller, but it makes up for it in charm.

Plants <3 books. Check out the nice new foliage at the library downtown.

New plants being added to our interior planter at the library this morning!! @SPLBuzz pic.twitter.com/NbLAprCTHP
— misha (@ahsimlibrarian) April 22, 2022

Uh Boba, rood eht so-heeck. Boba Fest is coming to the U District this weekend! With 15 different vendors offering blobby teas, it’s a perfect time to suck some boba down into your belly, where it will be slowly digested over a thousand years. Apparently The Stranger is the main sponsor of this event? We better be getting several gallons of tea delivered.

As if Boba Fest wasn’t exciting enough: This Sunday is May 1, and you know what that means — major retailers boarding up their windows, terrified that black-garbed communists will do something indecorous.

Coming soon: A habitable city. Signature-gathering is underway for I-135, a measure that proponents say would make affordable housing more attainable by creating a public housing developer.

Over one hundred Seattle voters signed @houseRneighbors I-135 today at the Capitol Hill farmers market to help ensure Seattle is affordable for everyone! #SeattleSocialHousing

Seattle Times finds something new to blame on George Floyd. Look, this is a fine article, and reporters usually don’t write their own headlines (except that we usually do at The Stranger), but WOOF, this one wasn’t quite fully cooked before it came out of the oven: “Police misconduct is costing Washington taxpayers millions. Is George Floyd’s murder one of the reasons?” I’m going to go out on a limb here and posit that the main reason that police misconduct is costing taxpayers millions … is because of police officers.

Mayor announces nearly $1 billion for street safety. Not our mayor, unfortunately. New York will spend nearly a billion to build bike lanes, plazas, and bus infrastructure, liberating people from sitting in toxic traffic. Meanwhile, Bruce Harrell was allowed to hold Joe Biden’s pen for a few minutes on Friday while jostling for a photo-op with politicians in the pocket of the oil industry. Now that’s leadership!

Not a single one of these Biden cronies supports the Green New Deal. Every single one of them accepts campaign donations from fossil fuel corporations. 😡 pic.twitter.com/DM7nOLybtf
— Salmona Kayak (@SalmonaKayak) April 24, 2022

Edmonds has found a new way to exacerbate human suffering. City Council in Edmonds will consider a measure tomorrow that would impose fines of $1,000 and 90 days in jail for people who have no permanent shelter. That’ll solve the problem!

Maxine is so good at catching. If you need someone to catch a lot of tennis balls, you’re in luck.

Let’s take this Friday to the Maxine! She loves zooming around outside and getting some air with her tennis balls. She is also good about matching your energy inside, and will settle fairly quickly for some Maxine and relaxing on the couch: https://t.co/7xoo7oNbhG pic.twitter.com/YDYoTPrb2s
— Seattle Humane (@SeattleHumane) April 22, 2022