Jon Spencer thankfully bounced back from a bout of Covid. Dave Segal
Sunday at Madame Lou's proved that a night of '90s/'00s indie-rock nostalgia could still send electrifying jolts of excitement through middle-aged bodies and those of a handful of younger folks. Jon Spencer's newest backing unit, the HITmakers, consists of Quasi keyboardist/vocalist Sam Coomes and drummer Janet Weiss, plus old Pussy Galore band mate Bob Bert on junkyard percussion. Those missing the defunct Blue Explosion should be able to pick right up with the HITmakers without a hitch.

The HITmakers sounded tight and vengeful, and for good reason: Spencer caught Covid earlier on this tour and the group had to cancel four shows, with the last nixed date being April 21 in Boise. Hence, Madame Lou's posted signs all over the room requesting that attendees wear masks. There was no way you could miss them. Infuriatingly, only half the crowd, at most, complied with this simple ask. What a lack of basic consideration! 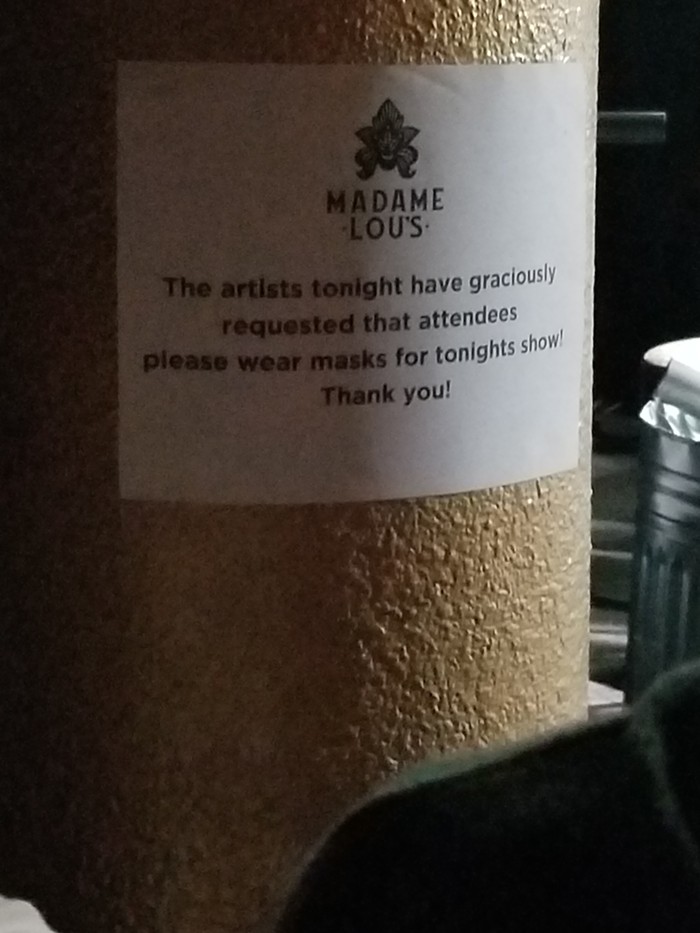 Read the gd room, people. Dave Segal
You call yourself a fan yet you can't cover your coronavirus holes for a few hours to protect the health of the people entertaining you? Even when anyone who scans the news can see that the pandemic is not over? Over the last seven days, there were over 4,000 new cases in King County, representing a 19 percent increase. We're averaging close to 700 cases a day, and the health department admits that's definitely an underestimate. As Jon sings on “The Worst Facts” from Spencer Gets It Lit, “You got to know your history, science, and math!/And know the facts!”

Covid-19 blues explosion. From Jon Spencer's Instagram
Despite being laid low so recently by the virus, Spencer still got in dozens of deep knee bends while singing in his stylized, skinny-Elvis manner and playing guitar in his patented slashing style in 20 songs over 70 minutes, including a righteous five-track encore. Coomes and Weiss, performing double duty, contributed wild organ exclamations and emphatically brutal beats, respectively. Bert—who also drummed with Sonic Youth in their early days—added crucial metallic percussive accents on an array of old car parts that he banged with hammers and metal sticks. He lent these new songs a Proustian KLANG for the aging Pussy Galore fans in the house. Speaking of which, the HITmakers also did a storming version of “NYC 1999!” from PG's Right Now! NGL, this made my night.

The HITmakers are part of a continuum of fuck-or-fight, gut-bucket blues rock that Spencer's been promulgating since the Blues Explosion started ripping shit in 1991. His modus operandi hasn't budged an inch since then. He's still optimizing excitement and placing a premium on energy and intensity, which may be why Spencer remains lithe and his hair gray-free at age 57. So one can't blame him when on “Love Handle” last night, Spencer ad-libbed, “What's worse than the virus is the stupidity and the selfishness.” It was the last song before the encore, and it provoked impassioned calls for more, even by some of the jerks at whom he aimed his ire. Spencer's creeping toward 60, a vulnerable demographic, and the folks who supposedly love him are making his livelihood precarious.

Quasi, now revitalized as a duo and rock solid. Dave Segal
In other news, Quasi perfectly set the scene for the headliners. Looking like approachable Reed College professors, Weiss and Coomes represent an almost Platonic ideal of '90s indie rock: melodically scrappy and rhythmically robust, bolstered by florid flourishes on Coomes's custom-built keyboard and Theremin-like gizmo and Weiss's deceptive funkiness. Coomes has figured out a way to make his organ simulate a snarling, wah-wah-FX'd guitar, and it never fails to sound cool as fuck. I hope he patents it. Quasi haven't released anything since 2013's Mole City, but they sound revitalized in 2022.

Jon Spencer & the HITmakers' setlist. Dave Segal
The Stranger depends on your continuing support to provide articles like this one. In return, we pledge our ongoing commitment to truthful, progressive journalism and serving our community. So if you’re able, please consider a small recurring contribution. Thank you—you are appreciated!
CONTRIBUTE NOW