A new poll just dropped. Screengrab from FM3 Research Poll
Here's something to consider this morning: A new survey of 832 Washington voters found majority support for Initiative 1992. That proposal would decriminalize all drugs statewide (but still allow cops to confiscate them if they catch people using them), expunge criminal records for possession, and direct $141 million in pot revenues to outreach and recovery services. Dealing drugs would remain illegal, of course, so cops could continue to stage buy-busts if they wanted to keep criminalizing addiction rather than treating it as a public health issue, but already I digress.

According to the survey, 53% of respondents supported the measure, 39% voiced opposition, and 9% kept their cards close to their chest. Those results seem like pretty good news for Commit to Change WA, the advocacy group funded by the ACLU of Washington that paid for the poll and hopes to put the question on the ballot this autumn. 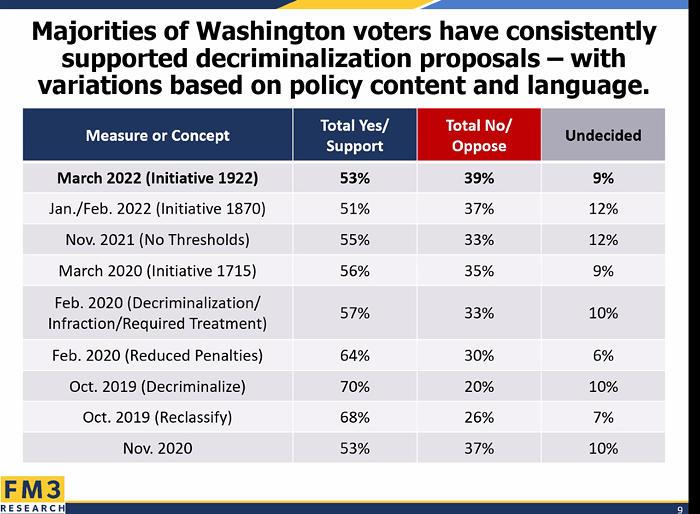 The pollster argues that Washingtonians have consistently supported the issues the initiative embodies. FM3 Research
During a press conference last week with members of the coalition, pollster Dave Metz said the new survey results largely align with voter sentiment expressed in previous polls on the issue. Broadly, most people in Washington say they're concerned about substance use, believe that criminalizing it has been "a demonstrated failure," and prefer a public health approach to addressing it, he said.

Everett Maroon, executive director of Blue Mountain Heart to Heart, a case management service out in Walla Walla, counts himself among the many who think jailing people caught with drugs hasn't worked. "All we do is arrest the person, arrest their progress, and then subject them to a very high risk of overdose and overdose death when they’re released," he said during the presser.

That was certainly the case for Carmen Pacheco-Jones. Long before she became the executive director of the Health & Justice Recovery Alliance, she said she endured trafficking and a heroin addiction. When she was 18, cops picked her up on a shoplifting charge. After a search, they found drugs on her. She sat in jail for 50 days waiting for a hearing and ended up pleading guilty to avoid a trial. That decision trapped her in the system. Over the next "several years," she said, she cycled in and out of jail, until finally she went to treatment. Treatment broke the cycle, allowing her to get clean and reestablish a relationship with her kids.

An earlier offer of treatment would have put her on the right track sooner. "We need to address root causes … and dramatically expand the outreach and recovery services that we know work, that we’ve seen work in other communities," she said during the presser.

Aside from not working to deter people from using drugs, you'll be shocked to learn that the criminal punishment system applied the possession law in a racist way across the state. According to state data collected by the American Equity and Justice Group, our courts convicted Black people and Native Americans of drug possession at disproportionally high rates in nearly every county in Washington.

This new push for an initiative to treat addiction as a public health issue rather than a criminal issue has been a long time coming. The initial group of advocates called itself Treatment First Washington, and they tried to get the measure on the ballot in November of 2020. The campaign said the pandemic sullied their efforts to gather signatures, so they changed strategies. In 2021, they tried to get the policy through the Legislature instead, using House Bill 1499 as the vehicle. Though the bill drew a meaningful amount of support from lawmakers, the proposal never made it out of committee. That year the Washington State Supreme Court struck down the state's drug possession law, which prompted the Legislature to re-criminalize possession as a misdemeanor for a couple years and appropriate some funds for treatment services. In the meantime, Treatment First WA rebranded as Commit to Change WA, and then eventually filed the initiative with some minor language tweaks. The campaign now says it needs more than 324,000 signatures by July 8 to make the ballot.

If successful, Washington wouldn't be the first state to decriminalize drugs while boosting services. In 2020, Oregon voters passed a similar law by a wide margin — 58 to 42. In its first year, most people accessed "harm reduction programs such as syringe exchanges and naloxone distribution," and 1% entered treatment, according to a February report from OPB.

According to the initiative text, most of the money ($155 million annually) will go to the state health care authority to fund "substance use disorder prevention, outreach and engagement, and recovery support services." Other pots of money fund a "public education program," "cannabis social equity" grants, a program to test the drugs seized by cops, and a "drug enforcement task force" at the Washington State Patrol.