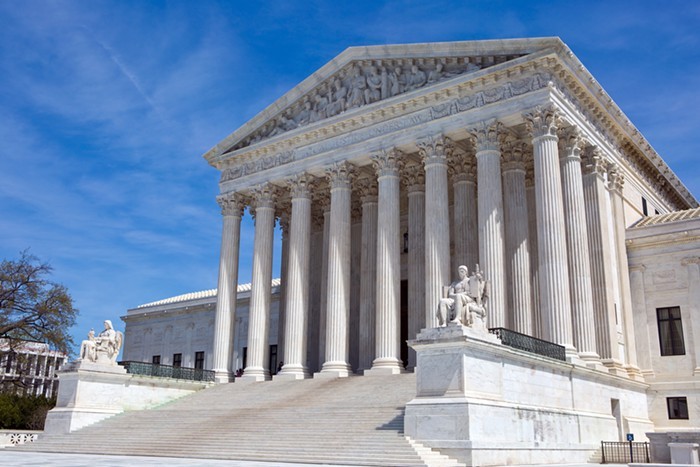 It's a little hard to read, but those words chiseled over the door say "Equal Justice Under Law. GETTY IMAGES
Okay, so the right wing is coming for abortion, but we know that’s not all they’re coming for. What’s next? Re-criminalizing contraception, re-criminalizing gay sex, re-criminalizing the existence of trans people? Well, no; none of those things are “next” — they’re already under attack.

Marriage equality is very much on my mind right now, not just because it’s a relatively recent victory but because it’s one I personally worked on as part of the team that brought the Prop 8 challenge to the Supreme Court over a period of several years about a decade ago. I remember sitting at the back of the court, watching Clarence Thomas swiveling silently in a high-backed chair as our attorneys presented their argument, which built on past victories concerning a constitutional right to privacy.

Constitutional law is a slow ship to turn, but it seems as though the country’s changing course with unusual swiftness, and with the impending ruling on abortion we may soon find numerous other rights that we thought were safe tossed overboard. How concerned should we be? Very, I think — but that doesn’t mean there’s nothing we can do. The solution to this alarming new heading may lie, in part, in a ship full of gay pirates. I don’t mean that metaphorically.

There’s a whole family of Supreme Court rulings that affirm rights not specifically called out in the Constitution. The framers never said “gay marriage” or “interracial marriage,” but following the Civil War, the Fourteenth Amendment introduced the terms “due process” and “equal protection,” which basically mean (in super-simplified terms) that all people are entitled to the full protection of the law (no picking and choosing which laws to apply), and that laws should apply to everyone equally (no picking and choosing which people they apply to).

Starting a little over a century ago, those rulings started to enshrine the idea that every American is entitled to some amount of bodily autonomy. There’s 1942’s Skinner v. Oklahoma, which ended forced sterilization; 1968’s Loving v. Virginia, which ended bans on interracial marriage; 2003’s Lawrence v. Texas, which ended the criminalization of consensual gay sex; and the highest-profile recent example of 2015’s Obergefell v. Hodges, which ended state-level bans on the freedom to marry.

(A side note: Ever since Obergefell, I really thought I was done having to police my language and use PR-friendly terms like “freedom to marry” instead of “gay marriage.” Apparently not!)

All of those cases attempted to fix some awful unfairness in lower-level laws — blue-collar criminals could be sterilized, but not white-collar, for example.

They also leaned on the 9th Amendment, which builds off of other elements of the Constitution to protect certain aspects of life — like marriage — from government intrusion unless there’s a very compelling reason to intrude.

In the leaked abortion ruling, Justice Alito clearly isn’t interested in a Constitutional right to privacy, writing that it’s not “plausible” that such a right would be “absolute.” Broad claims of autonomy are “too much,” he writes, and specifically omits rulings on marriage equality from a list of rulings that precedents that he thinks should be kept secure.

Is this cause for concern? Yes, I think, very much! We sometimes think of marriage as a sort of “luxury right,” something that privileged affluent white suburban gays dumped a ton of money into winning so that they could protect their wealth; and then once they had Obergefell, those self-interested activists lost interest in advocating for anything more.

I think that’s certainly the case for many people, including some I worked alongside for several years. But extending the freedom to marry to queer couples isn’t some nice-to-have for the wealthy.

At times like this, I think about Sharon Kowalski and Karen Thompson, a lesbian couple who met in the 1970s, exchanged rings in a commitment ceremony, owned a house together, and by any meaningful measure were clearly a committed couple. In the early 1980s, Sharon was in a catastrophic car crash and suffered severe brain injury. Karen, her partner, wasn’t allowed to see her in the hospital, and soon got into a years-long legal dispute with Sharon’s parents over who should look after her. The parents insisted their daughter wasn’t a lesbian, and did everything in their power to prevent the two women from ever seeing each other again. Eventually, eight years after the crash, Karen won guardianship — one of the first Supreme Court rulings to recognize a same-sex relationship as having equal legal footing to a straight couple — and was finally able to care for the love of her life.

It was an excruciating fight, as were the countless cases throughout the ‘80s and ‘90s of gay couples devastated by the HIV epidemic, left with no legal recourse when one partner fell ill or died and hostile family swooped in to take control, separate long-term lovers, and seize their belongings. Marriage — the equal legal recognition — is important. It’s not a luxury.

So how did we win marriage in the past, and how do we protect it now? There’s certainly an urgent legal strategy to pursue, which I happily leave to smarter figures than me. But court fights aren’t the full story. There’s also a cultural component.

Part of the work of queer liberation has been the winning over of mainstream culture, reducing bigotry, dispelling falsehoods, and steering culture away from idiotic ideas like “gays are recruiting kids.” In fact, when Joe Biden became the highest-ranking federal official to endorse the freedom to marry in 2012 (creating what was an extremely chaotic day for us in the office), he specifically cited the show Will & Grace as having done more to push American support for marriage equality than anything else.

Since then, I think we may have unwittingly lost some cultural ground due to the ever-increasing diversification of culture. In the early 2000s, thirty million people watched Ellen’s coming out episode because that’s how we consumed culture twenty years ago. Even then, with cable and satellite TV and the beginnings of online video, Americans tended to be more familiar with the same major cultural touchstones, because we had limited choices in entertainment compared to today, when Netflix could drop a multi-million-dollar series that nobody you know hears about because the algorithm doesn’t recommend it to you amidst the practically infinite options.

That’s not to say that more diverse options in media is a bad thing — I think it’s great! But it also means that the days when a gay sitcom like Will & Grace reaches fifteen million people (and bends their sympathy toward justice and equality) are over. Instead, we may be more likely to find gay content in already-gay channels, rather than mixed in with the straight stuff. I don’t know to what extent heterosexuals are exposed to queer characters like they were twenty years ago, and I don’t know of anyone doing that research right now, but I suspect in many ways it’s easier now for straights to avoid contact with LGBTQ+ issues. And that, I think, is why it’s been so easy for conservatives to revive the old prejudices of decades past.

That's also why I’m heartened by shows like HBO Max's Our Flag Means Death, which begins as a sort of The-Office-but-on-a-boat, perfectly palettable to straight viewers before gradually ramping up the queerness through layers of subtext before exploding like a cannonball through a unicorn. Back in the ‘90s, Will & Grace attracted viewers by (super misleadingly!) advertising itself as a will-they-won’t-they comedy about a straight man and his female best friend, with a strategically-planted kiss between Will and Grace in the pilot to draw a mainstream crowd … before springing the gay thing as a surprise. It was effective: Famously, NBC test audiences didn’t think that Will was really gay at first.

I think shows like Our Flag Means Death have the potential to reach beyond gay audiences to impact straight viewers, as do queer movies like Everything Everywhere All at Once. Sympathetic, well-rendered queer characters and relationships have the potential to push public opinion while our clever attorneys push litigation. Between the culture front and the legal front, neither stands much chance of success without the other.