Does anyone here still care about the fact that the cops gassed our neighborhood? Lester Black
I already feel like a broken record: All the powers that be in City Hall really seem to want to end federal oversight of the Seattle Police Department despite continued racial disparities found in the way the agency polices the city. We already dissected the monitor's latest report in Wednesday's Slog AM, but I imagine we'll have to keep making these same points over and over and over again as this debate continues for the next year or so.

City Attorney's Office has a solution in search of a problem: According to the heads of King County's Dept. of Public Defense and Disability Rights Washington, the "high utilizer" list that Ann Davison's office uses to keep people out of Community Court, a program that connects people with services rather than jail for certain low-level offenses, includes people who really don't belong in the criminal legal system at all. They argue the CAO should focus instead on prioritizing those people for supportive services.

Love to see our democracy crumbling in slow-motion: After wasting much of the first two years of his presidency bickering with centrist Senate Democrats about the deficit, Biden's approval numbers have hit a new low. Instead of spending so much time trying to appease them, he could have tried labeling them as obstructionists and then campaigning for a larger majority, but party leaders tend to reserve that sort of behavior for the progressive wing. I guess he'd rather just repeat the mistakes of the Obama era and lose to a party promising a rapid descent into fascism. Anyway, speaking of centrist Democrats, Washington's House members need to join me in the next blurbs.

Alright, what the hell: You have to know better than this mealy op-ed from Rep. Suzan DelBene by now. I get it, the median House district is more conservative than the country more broadly, and so you want low-information voters to catch you saying that they don't need to be police abolitionists or advocates for nationalizing the fossil fuel industry to vote blue.

You know what's not required — at all — to make that argument credibly? Reinforcing the legitimacy of an opposition party that has been crowing from the top of their billion-dollar propaganda apparatus for more than a decade about how disinterested they are in cooperating with you. Negative partisanship is a hell of a drug, and appeals to the middle do not require giving any credence to Congressional Republicans who literally gave tours to the insurrectionists the day before your workplace was invaded. I guarantee you that the QAnon Shaman is not a brand that middle-class soccer moms want to be associated with.

On the other hand, maybe the next presidential election won't matter anyway: Remember the guy running for Governor in PA who I said I was most worried about in Wednesday's primary night roundup? This is why I was worried.

BREAKING: King County Prosecutor Candidate Jim Ferrell has lost access to the Democratic Party's voter database. According to state party chair @Tinapo, the @washdems suspended his access upon request from the @kcdems pending an investigation into whether T&C were violated. pic.twitter.com/N1vJBJkakM
— William Casey (@willjcasey) May 20, 2022

Rent is still too damn high: As if the pandemic-induced inflation wasn't screwing over working people enough, rents in this wonderful country hit a record high last month. At least the CNN breakdown of this grim reality correctly blames our failure to produce enough housing.

America proactively admits failure for once: Breaking our 200+ year streak of refusing to grapple with a problem until it reaches existential crisis levels, the U.S. government is allocating $3.5 billion to kickstart our carbon capture industry. People much smarter than me about climate policy generally hold mixed views on carbon capture, with some criticizing it as a moral hazard that could sap political will for mitigation measures, but given that a literal coal baron is blocking all climate legislation nationally, it seems like a wise move to assume we're going to need a backup plan.

Free speech hypocrite also a cheapskate: According to Business Insider, Elon Musk's SpaceX paid $250,000 to silence a flight attendant who Musk allegedly propositioned for sex. The report also includes allegations that he exposed himself to her while offering to buy her a horse (?) in exchange for a sexual massage. This is obviously gross and reprehensible behavior, and maybe our society's continued inability to provide meaningful accountability for disgusting men in power has jaded me, but I can't get over how low the settlement amount is. For a guy who can toss out a multibillion-dollar bid for a social media network seemingly on a lark, $250k is chump change.

On a related note, every Tweet is a mistake:

Oklahoma, I promise there are better ways to get noticed: Have you considered commissioning a sequel to Oklahoma? I'm not a musical theater guy, but I hear people think it's a classic. Plus, it would create significantly less misery than your current PR strategy of one-upping your red state neighbor's abortion laws.

Speaking of local elections: Today's the last day to file for any position on this November's ballot, so get that paperwork in — especially if *ahem* you're considering running for *cough* King County Prosecutor.

If you do take the plunge, the local elections experts at Run for Something have put together a handy guide for first-time candidates.

Finally, our weekend podcast rec: This excellent interview from Crystal Fincher of Hacks & Wonks is a must-listen for anyone who wants to have an educated opinion on the public safety debate in Seattle. It would be a more enjoyable listen if Senior Deputy Mayor Monisha Harrell had given something resembling direct answers to Crystal's questions, but paying attention to what she wouldn't say will give you a better understanding of what the Harrell administration's positions are on public safety than listening to any press conference. 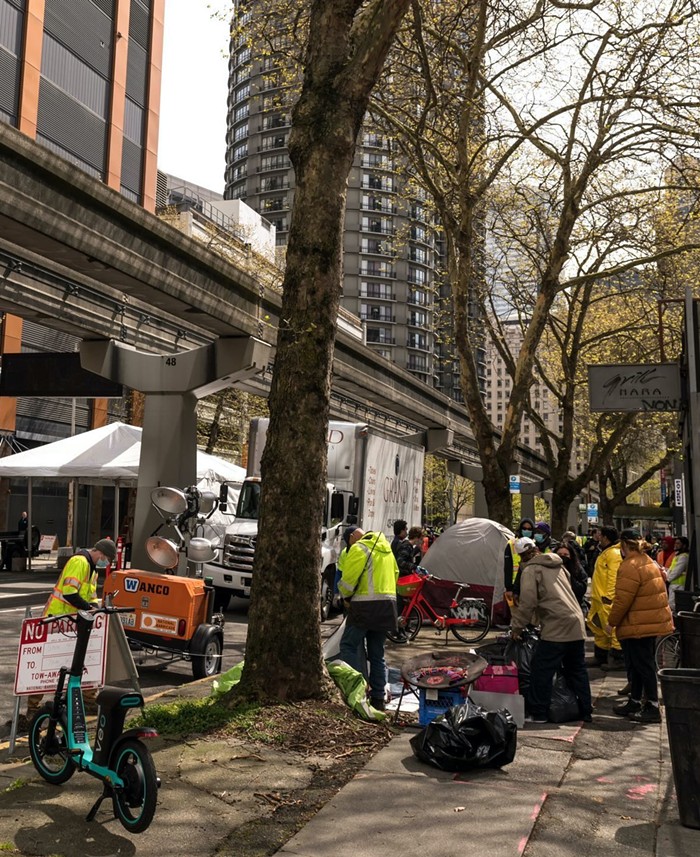 Slog AM: FDA Authorizes Fourth Jab for People over 50, Trump's Calls on Jan 6 Are Missing, Expect Spring and a Beautiful Sunset Today