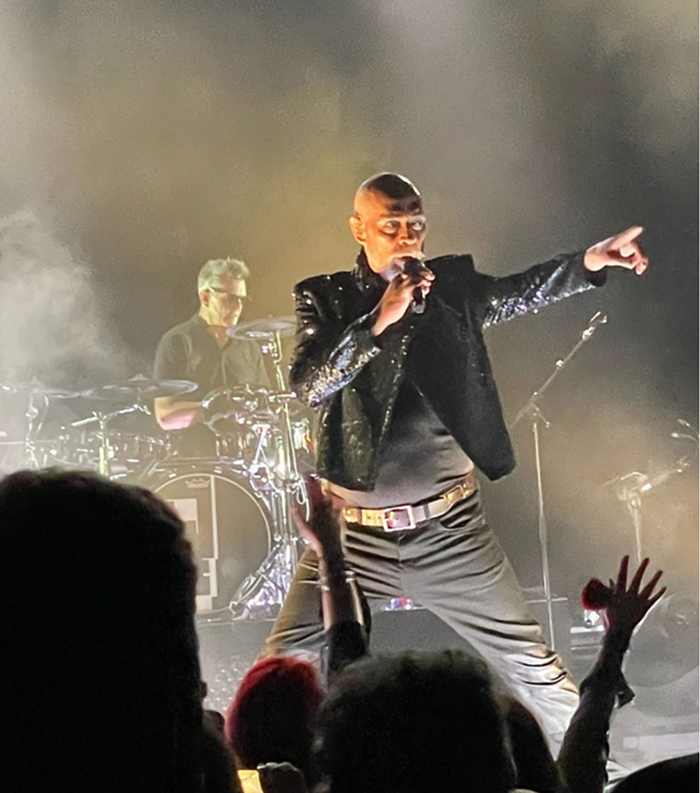 Nearly 40 years on from their peak period (1979-1983), goth-rock pioneers Bauhaus still sounded vital and vicious. Playing to a large and largely black-clad crowd of die-hard fans at the Paramount last night, the original lineup of vocalist Peter Murphy, drummer Kevin Haskins, guitarist/saxophonist Daniel Ash, and bassist David J ripped through 16 songs from the aforementioned era (including four covers) to the sort of applause, “WOO”s, and “WE LOVE YOU”s that reflected an undying devotion—and a potent strain of nostalgia.

As far as one could see, the attendees were standing throughout the set, many venturing into the aisles to dance. Sing-alongs happened, unfortunately, as during the night's last third, Murphy's aging pipes needed some slack picked up. (Curses, though, to the dude behind me for his wack “singing” to “Kick in the Eye.”

Bauhaus: still vital and vicious four decades on from their prime. Cristi Russo
Bauhaus were fairly businesslike onstage, except for Murphy, who was as theatrical as a Shakespeare troupe. Looking literally like a cartoon villain with his bald pate, white beard, and intense glare, Murphy spent the first few songs stalking the stage with a scepter, hamming it up for the photographers and Instagrammers. (The feather-laden top he donned—which looked like a Roxy Music-era Brian Eno cast-off—was a nice, softening touch.) Thankfully, he's appeared to have recovered from his 2019 heart attack. 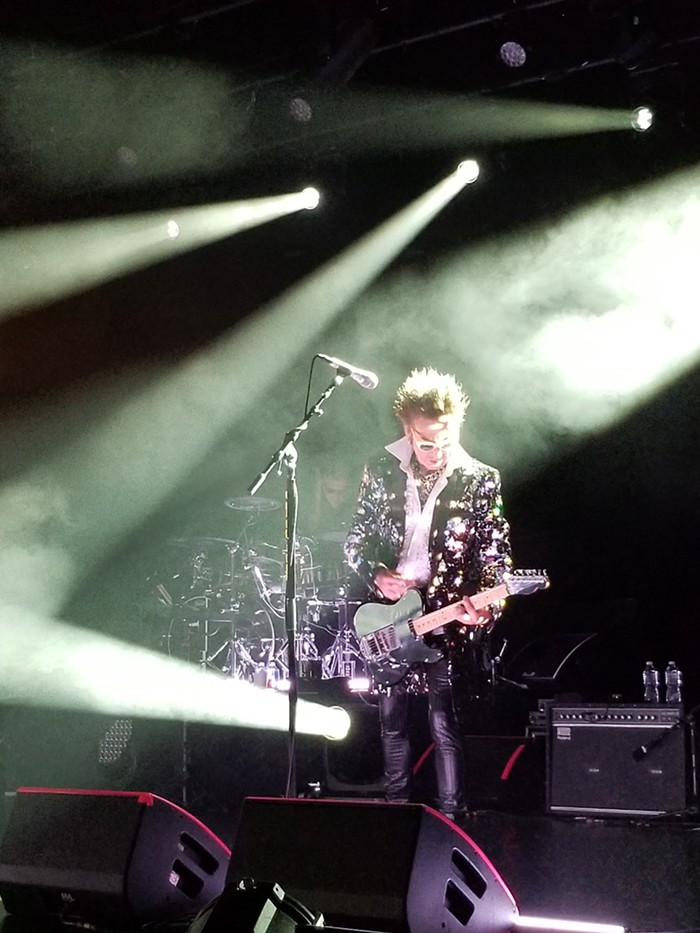 Daniel Ash played guitar, jamming good with J and Haskins. Dave Segal
Fluctuating between stentorian belting and guttural crooning, Murphy dialed in his thespianic and messianic gestures to 11. Did he use the mic stand as a cross on which to feign crucifixion during “Stigmata Martyr”? Christ almighty, he did. Did he wield his scepter like a mad king during “Double Dare” and “In the Flat Field”? My camera cannot lie. Did he hold aloft a crown in the middle of the set? Assuredly. Did he broadly gesture to the heavens as the spotlight illuminated him during “Bela Lugosi's Dead”? You bet your translucent black cape he did. Did he out-Bowie David Bowie during Bauhaus' cover of “Ziggy Stardust” in the three-song encore? Oh, he took it all too far, but, boy, could Dan Ash play guitar.

While the song selection was solid (though I am probably not the only person in the house who could've used “Terror Couple Kills Colonel”) and the performances tight, the sound was less than optimal. Murphy's vocals and Haskins's drums boomed with apt bombasticness, but Ash's slashing guitar and J's oft-dubby bass deserved more prominence in the mix. Especially during the intro to “Bela Lugosi's Dead,” the bass should be trembling our internal organs and the guitar lacerating our skin. Both were muted. T.Rex's “Telegram Sam”—which is the rare cover that surpasses the original—should've torn us asunder and made the walls quake, as it does on record. But no. 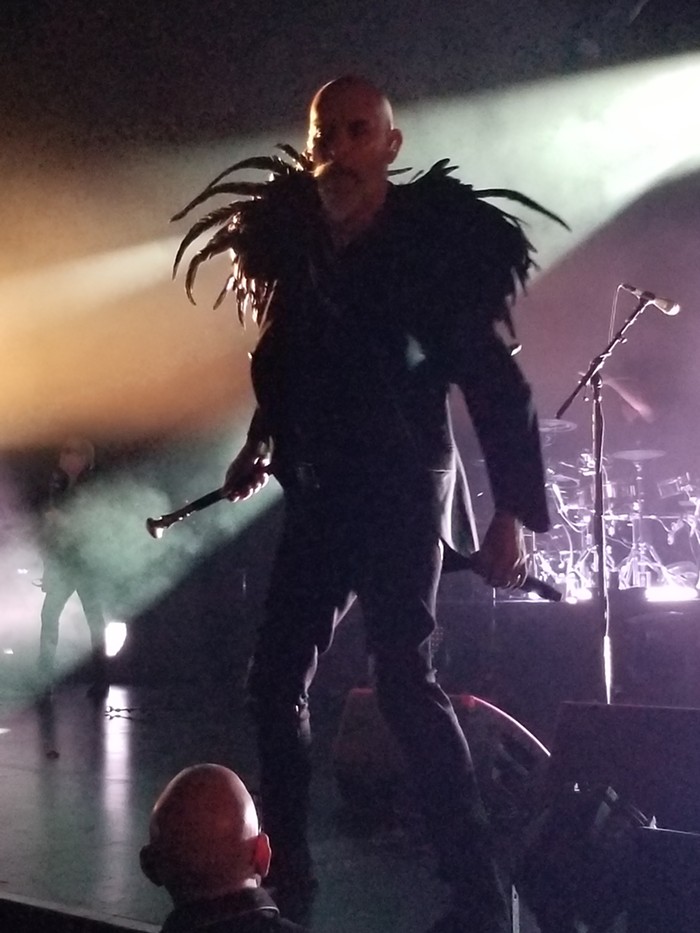 Goth damn, Murphy looks wicked with a scepter. Dave Segal
One impressive thing about Bauhaus: For all of their enduring popularity, even their hits boast weird rhythms and unusual timbres. “The Passion of Lovers,” “She's in Parties,” “Kick in the Eye,” “Dark Entries” (a song so dope, a label named itself after it), “Bela”... all will stand out in your typical “'80s Night” dance events. And how many groups on the nostalgia circuit would open their sets with an obscure John Cale B-side, such as the ominous stomper “Rosegarden Funeral of Sores”? How many marquee acts would cover Iggy Pop's lurching, doom-laden “Sister Midnight” to kick off an encore? Very few. You have to respect Bauhaus' commitment to doing whatever the fuck they want while raking in big paydays. Goth rock will never die, if Murphy & Co. have anything to groan about it.

Tuvan throat singer Soriah and his drummer were shamanic AF. Cristi Russo
Hailing from Portland, opener Soriah set a shamanic tone that cleansed the room of maleficent juju. Dressed like a new wave Dr. John at the height of Mardi Gras, Soriah (aka Enrique Ugalde) vocalized in a cavernous manner known as Tuvan throat singing, which generates shocking overtones. The effect is eerie and stunning, as if Soriah had a synthesizer and/or Theremin lodged in his larynx. At its most extreme, his voice sounded like he was gargling coal nuggets; it was a staccato, glottal flow I've never heard a human produce. Augmented by the drummer's ritualistic, tom-heavy beats and Soriah's FX box, the music came off like a more sinister Dead Can Dance. The goths loved this primal Sturm und Drang. Credit to Bauhaus for choosing an artist so decidedly non-rock & roll to set the scene.