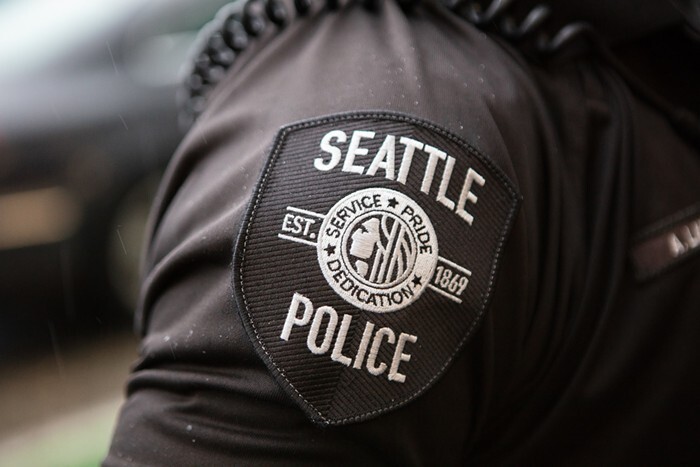 The million will pay for moving expenses and an ad campaign to hire some more guns and badges. Lester Black
After nearly half a year of debate, the Seattle City Council finally allowed the Seattle Police Department (SPD) to spend even more of its money on getting more cops.

The council voted 6 to 3 on Councilmember Sara Nelson’s resolution to promise that the council will lift spending restrictions on anticipated 2022 salary savings so that the cops can offer hiring bonuses. The resolution does not indicate a specific dollar amount or fund a specific bonus program from the $4.5 million in salary savings, but rather leaves it up to the Mayor to develop one with council’s approval. “Frankly, whatever. I don’t really care what it’s used for,” Nelson said.

The council also voted 6 to 3 on Public Safety and Human Services Committee Chair Lisa Herbold’s complimentary ordinance to amend the Seattle Police Department’s spending restrictions, freeing up over $1 million to sweeten the pot for more cops. That money includes up to $650,000 for moving expenses for new police officer hires, up to $350,000 for a national ad campaign to market police officer positions, and up to $150,000 to pay for a national search to hire a permanent Chief of Police. The ordinance also allows other departments to pay relocation expenses for new hires, but it does so in less specific terms because those departments do not have funding under a proviso.

While this resolution does not direct new money to the department, the progressive opposition (Councilmembers Kshama Sawant, Tammy Morales, and Teresa Mosqueda) took issue with the rest of the council allowing cops to spend salary savings on bonuses, especially in a moment when the City is asking departments to prepare for as much as a 6% budget reduction.

As budget chair, Mosqueda repeatedly argued that approving the resolution and the ordinance would mean even less money left over at the end of the year to fulfill 2023 budget priorities.

On top of that, Sawant reminded the council that cops remain one of the best-paid government workers, making more than double that of social workers “who actually turn people’s lives around,” she said. For scope, the fund freed up by Herbold’s ordinance could pay the annual salary of about 20 social workers at REACH, a homelessness outreach provider.

The progressives agreed that hiring incentives do not make communities safer. Morales drove that point home by rattling off all the ways the council could invest $4.5 million to better address public safety concerns. She said the council could create a safe consumption site, or build two tiny house villages, or fund 14 permanent supportive housing units, or cover the cost of groceries for 116 families-of-four living at 30% of the Area Median Income for a whole year, or cover $30,000 in startup costs for 150 low-income residents looking to start a small business, or cover a year's worth of back rent for about 170 struggling renters in Seattle.

While some supporters on council insisted these votes were not the end-all-be-all in striking a balance between police and police alternatives, the votes mark the latest episode in the council’s continued backpedaling away from some timid progressive energy to defund the police voiced in 2020.

Coincidentally, the latest iteration of the defund movement launched almost exactly two years ago, when cops publicly murdered George Floyd. Sawant and public commenters gave the council an earful for at best conflating police retention with safety, and for at worst prioritizing that retention over safety.

“These are not the actions of elected officials who want to increase police accountability regardless of the words they might use. These are the actions of a political establishment that desperately wants an excuse to say that police brutality is beyond their control,” Sawant said.

A photo from two years ago next week—at the protests in response to George Floyd’s killing.

More recently, In fall of 2021, the cops asked the council to let them spend $15 million in salary savings for a bonus program. The council took a slightly more progressive stance, dismissing Councilmember Alex Pedersen’s attempts to fund such a program but letting the cops cover the costs associated with losing officers. The council ultimately shifted more than $5 million out of the department’s budget and put it into the Human Services Department and a civilian crisis response unit known as Triage One.

After gun-and-badge Concilmember Nelson replaced former Council President and progressive Lorena González, the conservative faction pulled in Councilmembers Andrew Lewis and Dan Strauss, who historically were swing votes on cop policy, leaving progressives on the defensive, pointing to the fact that the council fully funded the department’s staffing plan.

Months in the making

Despite the Mayor arguing in a May 9 press release that Herbold and Nelson had come together with a #OneSeattle solution, the preceding discussion was actually fraught with power-struggle and tension.

Former Mayor Jenny Durkan started this conversation on her way out of office when she issued an executive order to allow SPD to offer hiring incentives of $10,000 for new hires and $25,000 for lateral hires. At the time, the council acted as a mostly united front, voting 8-1 to amend the executive order so that it would expire at the end of 2021. Sawant voted no because she opposed even temporary sign-on bonuses for cops.

Besides Sawant, the council didn’t wholly reject the idea, Herbold and others just wanted to check if the strategy would help with the cops’ retention problem and to see if other departments might need similar programs to address the “Great Resignation,” which has impacted all sectors of government work. So, Herbold asked the Seattle Department of Human Resources (SDHR) to conduct a study to answer her questions.

But that wasn’t good enough for Durkan. In her last moments as Mayor, Durkan went behind its back and told SPD to continue offering bonuses beyond the cutoff.

So the department did just that. For a month, SPD advertised unauthorized hiring incentives before anyone noticed and put it to a stop. The council dealt with Durkan’s last bout of trickery by retroactively allowing the department to fulfill its promise to five new cops who applied under the assumption that they would get a bonus.

Even after all that headache to avoid jumping the gun, Nelson couldn’t help but jump the gun, and so she announced a resolution to signal support for hiring incentives before the SDHR sent over the long-awaited report. Her allies, Pedersen and Council President Debora Juarez, showed early support for her resolution, revealing the increasingly obvious power shift in the council.

If Nelson could have contained her excitement, she would have soon seen that the report found inconclusive evidence that hiring bonuses helps to lure more cops. Further, in an April committee meeting, the SDHR gave a presentation in which Talent Acquisition Director Keith Gulley cautioned that these bonuses do not address the larger issue the city faces in retaining employees, which, according to the report, include noncompetitive wages, unsupportive work conditions, and limited promotion opportunities. In fact, Gulley said this could even cause tension between new hires and current employees.

The SDHR’s presentation did not seem to resonate with Nelson. She dismissed the report as a “two-page memo,” insisting that “this is one area where we don't need a consultant, really, to study the benefit of incentives,” and the council could implement an incentive program immediately.

Despite Nelson’s outright rejection of the City’s report, as Pedersen said, the Mayor “brokered” the compromise between Nelson and Herbold, a compromise that garnered support from conservatives and frustration from progressives.