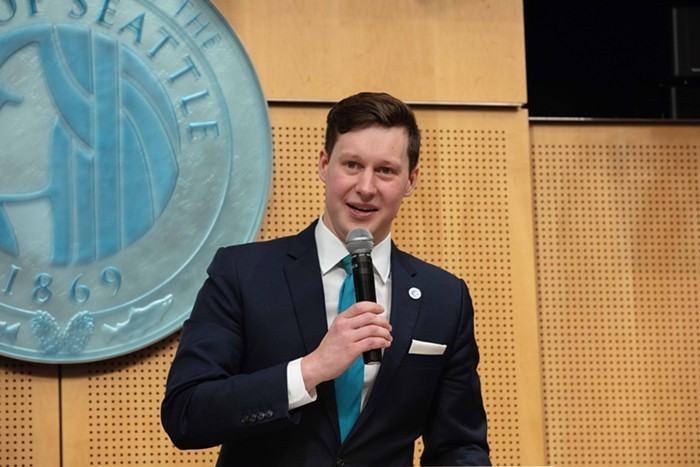 App-based workers call Lewis's self-own a "betrayal." Lester Black
After meeting with app-based workers for nearly a year to craft a new policy designed to make huge corporations such as Doordash, UberEats, and Rover pay their workers minimum wage, the bill’s cosponsor, Councilmember Andrew Lewis, cast the deciding vote to reduce the scope of the legislation, excluding thousands of workers. With that vote he joined Councilmember Alex Pedersen and Sara Nelson, the council’s corporate bloc.

“I expect this from Nelson and Pedersen, but from Lewis, who cosponsored the bill, this is really disappointing… It’s weird, it’s confusing, it’s a betrayal,” said Magnolia Klee, who finds cleaning work on TaskRabbit, and who now counts herself among the thousands the committee denied a mandated minimum wage.

In Tuesday’s meeting, the Public Safety and Human Services Committee voted on twelve amendments to the bill. Even before the votes, two amendments sponsored by Pedersen worried the organizers at Working Washington, a nonprofit who worked with Councilmembers Lisa Herbold and Lewis on the original ordinance.

That earlier version of the ordinance offered slightly different rules to accommodate business models involving what the bill called “marketplace” workers. "Marketplace" workers, as defined in the bill, perform tasks scheduled in advance, but, unlike some app-based delivery workers, they negotiate with customers without monitoring from the app. Examples include Rover, a dog-walking service, or TaskRabbit, where people can sell labor — moving boxes, painting walls, and other tasks around the house.

In a close 3 to 2 vote, Pedersen’s first proposed amendment expanded the definition of a “marketplace” network. Under that proposal, a company could qualify for the slightly tweaked rules if it “primarily” offered pre-scheduled services rather than "exclusively" offering them. His second amendment, which also passed 3 to 2, then excluded “marketplace” app-based workers from the policy altogether.

Sage Wilson, Campaigns Director at Working Washington, said the amendments weakened the bill and sided with marketplace apps, which, according to Herbold, have consistently asked for this exemption. Still, to Working Washington, this legislation was always meant to regulate the entire market, with no workers left behind.

“Nobody thinks they need to write different minimum wage laws to apply to fast food workers versus administrative assistants, right? I don’t care if your business model is not paying your worker minimum wage,” Wilson said.

In a press release, Working Washington also speculated that those two amendments could encourage other companies to tweak their business models to fit the excluded category.

In a phone interview with The Stranger, Lewis gave several explanations for why he suddenly voted to exclude thousands of workers from the protection, but the organizers at Working Washington didn’t like any of them.

Lewis said that he felt that during negotiations the council committee continued to make little exceptions to account for the different business model, and it just got to a point where he thought it would be better to give marketplace workers the right to minimum wage in another bill.

“I'm not saying we won't do them. I just don't want to do them in this bill,” Lewis said.

The council’s work with app-based workers was not going to end with this bill anyway, so Lewis said he would do something to address this exclusion in forthcoming “PayUp”-branded policies. He did not give a timeline on such a bill, but he said that he and Herbold would discuss next steps after the first bill passes. He said it’s sort of a “moot point,” as the bill won’t take effect for another year while the Office of Labor Standards gets its ducks in a row. “It's not like as of Tuesday, the delivery apps are going to have certain rights and the marketplace workers won’t,” he said.

Lewis also doesn't share Working Washington's concerns about the companies exploiting this loophole. New York City, for instance, also excluded these types of workers in similar legislation, but no company drastically changed their model to avoid paying minimum wage as a result. Herbold agreed that it would be tough to imagine how an existing on-demand network company could weasel its way into the excluded category, but Working Washington did not seem as confident that companies would give up and play by the rules.

“The gig companies’ entire business models are based on squeezing through a loophole in our existing labor standards to not pay minimum wage. I think it's pretty naive to think that the same sets of companies, same sets of venture capitalists, same corporate lawyers, won’t look at definitions like this and find a way to squeeze through again,” Wilson said.

Moreover, Wilson said that the expanded definition screws existing delivery workers on “primarily” marketplace apps, even without trickery from companies. For example, TaskRabbit mostly offers marketplace services, so it wouldn’t have to ensure its workers are paid minimum wage even though workers also perform on-demand delivery through the app.

Lewis also said that he did not vote on this amendment “for nothing.”

“I think it helps to take the temperature down and make sure that there's not like a big backlash, because [the apps] are pushing really hard against this bill still, so anything we can do to divide their coalition I think is also helpful,” he said.

With that in mind, Wilson said Lewis did not “take the temperature down” one bit.

“I think they’ve just created an extraordinary amount of controversy in the last week here among the workers they want to support this over something that didn't need to happen. If the plan was that excluding thousands of workers at the last minute would make everybody happy, it didn’t work.”

Wilson said Working Washington is now looking at amendments that could mitigate the harms of recent changes before the council votes next week, but, in all, the organization doesn’t want to delay anyone from getting the minimum wage. Wilson said workers are more concerned with paying their rent than figuring out what kinds of policies they might be able to “coax Sara Nelson into voting for.”