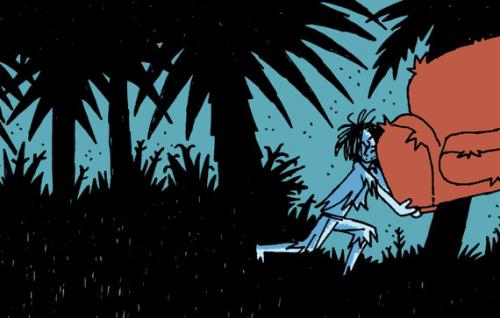 Connie Willis is at the Hugo House. Willis is a sci-fi writer. She's the author of Doomsday Book, Passage, and my personal favorite, To Say Nothing of the Dog. She'll be reading and talking about writing science fiction and writing in general. You should go to this if you like science fiction and/or you'd like to write.

At Town Hall, Jonathan Curiel reads from Al’America: Travels Through America’s Arab and Islamic Roots. It's about how there is more Middle Eastern influence in America than we might initially think. You should go to this one if you like politics, religious studies, or you want to blow your racist relatives' collective minds at Thanksgiving this year.

On any other day, these would be the readings of the night. Unfortunately for these two authors, Benjamin Parzybok is reading at Elliott Bay Book Company from his new novel Couch, about three men moving a couch and trying to save the world. I wrote about it in the books section this week:

None of them knows where the couch came from—it appears to be handmade, and the fabric and stitching stymie any efforts to cut the thing open and look inside. And soon enough they realize that the couch gets heavier when they try to drag it in a direction the couch doesn't want to go:

"Okay," Thom said, "Let's think for a minute, let's be sane, let's theorize. Let's just for a minute take it for granted that this is a magical couch—or technology advanced to a state that we think of it as magic. First of all, we'd have to admit the presence of magic in a world that is generally devoid of it."

As though under some weird power, they decide to take the couch where it wants to go. Their journey stretches from Portland, Oregon, to South America, and they discover that evil forces want the couch for their own nefarious purposes.

There is a little bit of anger in the comments to the story because I claim that Couch is the next logical step for fantasy novels, a genre which hasn't changed much since Tolkien. People got mad, listing authors like Neil Gaiman. I would contend, though, that just because a book has magic in it, it's not a fantasy novel. And I would also contend that Couch is so much farther beyond Neil Gaiman in terms of creating real characters and actual writing skill that it makes Gaiman feel like an uninspired genre writer. (Which he kind of has been, lately—have you read The Graveyard Book? ZZZZZZZZ.) In any case, this is the reading you should go to tonight because it is an awesome debut novel and one day you will be able to say you saw him when he was just a debut author of a paperback original book and all your friends will be like "No fucking way!" and you'll be all like "Way."

The full readings calendar, including the next week or so, is here.