Proven: Andrew Hughes Can Bicycle and Kayak. But, Can He Beat Jim McDermott?

I met Democratic Congressional candidate Andrew Hughes at 7:45 a.m. yesterday on the dock of the Fauntleroy Ferry terminal in West Seattle. We were both trying to fight off shivers from the morning cold, and welcomed the distraction of a man in a bright orange-and-yellow vest who came by collecting signatures.

It turned out they were signatures for Referendum 74, the effort to repeal Washington's new gay marriage law. Hughes, 30, supports gay marriage. So, as he's been doing all over the 7th Congressional district lately, he struck up a conversation with this potential voter. If he could convince this signature gatherer to change his mind on gay marriage, great. And if he couldn't, maybe there was a Hughes vote to be earned anyway.

No dice. The signature gatherer went on about the "dictionary definition" of marriage and called Jim McDermott, the 7th District's Congressman for the last 23 years, an "old friend." By this, it didn't seem that the man meant he and McDermott (who supports gay marriage) hang out a lot. Just that he knew McDermott's name well, and thought of him fondly. As a lot of people in this district do.

Hughes, whose fledgeling campaign has knocked on 6,000 doors since April—with 2,000 of those doors knocked on by Hughes himself—admitted: "Mt. McDermott's a big mountain to climb."

Which points directly to the question: Is Hughes up for that kind of challenge?

By kicking off his campaign with a three-day trek around the district—involving biking, kayaking, swimming, and walking—Hughes is trying to show that he's certainly up for a physical challenge. And if he can bait a reporter (or several) with the trek's visuals, he'll tell that reporter (or several) how, as a tax attorney, he's up for the rest of the challenge of being a Congressman, too.

I was the only reporter who showed for the first leg of Hughes's journey. And McDermott, 75, shrugged the whole thing off yesterday, calling Hughes's trek a stunt. As we headed to Vashon Island, Hughes responded:

"You can call it a stunt, but at the end of the day it's about community involvement. It's definitely not going to be about changing the world in three days. It's about showing the will and showing the energy."

It was also about explaining the rationale for dumping a longtime Congressman who's known in Seattle—and nationwide—as a champion of liberal causes that other Democrats in Congress sometimes won't touch.

"There's a need for a new voice," Hughes told me. "And especially for a new generation of leadership."

Hughes said McDermott exhibits "a lack of urgency," has "failed to deliver," and has "become quite marginalized over the years." Because of this, Hughes said, "There's a need for a fresh face to come in there and build coalitions... People just feel that he hasn't done as much as he could in that seat."

What about McDemott's long experience, and his senior seat on the House Ways and Means Committee?

Hughes claimed, as proof of his point that McDermott has "failed to deliver," that the Congressman, in his entire 23-year career, has only been able to pass six pieces of legislation that he drafted, sponsored, and shepherded through.

"That's ridiculous," shot back McDermott spokesman Kinsey Kiriakos when I checked the assertion with him later in the day. "The Congressman is in the minority right now, and I can think of four bills already in this Congress that my boss authored, and was an original co-sponsor on, and shepherded through this Congress." (Two of the bills had to do with foster care, and the other two had to do with trade.)

"That's just in this Congress alone," Kiriakos continued. Add up the multiple extensions of unemployment insurance that have been authored and introduced by McDermott since the Great Recession hit, and you're easily at or over six, he said.

McDermott, Kiriakos concluded, "knows who to talk to, and how to get things done." 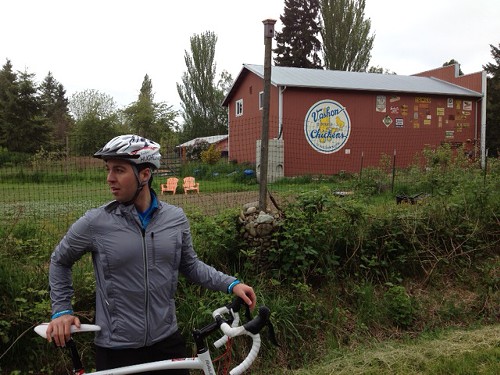 Hughes has raised about $200,000 so far, but about $60,000 of that comes from his own pockets. He owns his own home and rents part of it out, plus he has some family money from the cleaning business that his great-grandfather, a Russian Jew who immigrated from Moscow, founded after the San Francisco earthquake and fire of 1906. That business went on to become the janitorial giant ABM Industries.

As he rode along the rural Vashon roads on his white Raleigh Revenio, Hughes told me that his family no longer runs ABM, but that he felt "blessed" to have grown up in fortunate circumstances due to previous generations' work building the company. He's for an income tax on the wealthy in Washington State, calls our sales tax "completely regressive," and said of the Bush tax cuts for the rich: "They're horrible. They need to go."

Hughes is a tax lawyer—a credential he came to via the University of Washington and Seattle University—and says his experience practicing law, while limited, led to him "seeing a lot of the inequities of the tax law itself."

He slept out at Westlake with Occupy Seattle early on, and says he views the movement as "a thermometer for the country itself and the frustrations that are out there... It's been decades of concentrating wealth in a small sliver of society."

How does he square all of that with the political viability he's helped buy himself with his economic privilege and resources? "It's not about buying a seat," Hughes said, adding that if this run doesn't work out he'll have to get a job, not go on to a life as a philanthropist or something. His personal financial resources, he was saying, are not that big in the scheme of things. 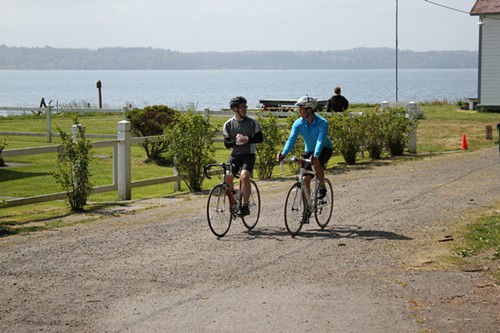 It was easy to get what Hughes was after with this highly athletic, highly photogenic day. I mean: 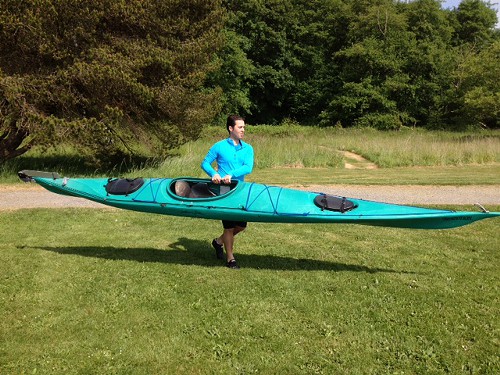 And in case you haven't gotten the point yet, here's another thing I learned along the way: Hughes is hoping to skydive into the Capitol Hill Block Party later this summer. He might also do some scuba diving. And this morning, to kick off Day Two of his trek across the district, he'll be swimming Lake Burien. (Before walking from Burien to Edmonds over two days, stopping to officially file his campaign papers in Seattle later today.)

It was easy, as well, to get that Hughes thinks McDermott has outlived his usefulness and that it's time for, as Hughes puts it, "a fresh face." But I wondered: Is there really any serious policy differentiation between these two?

I decided to use our time kayaking across Puget Sound trying to find out. 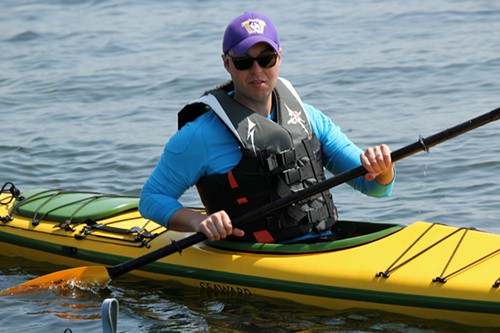 Hughes is trying to turn McDermott's lefty fierceness against him, arguing that the fierceness keeps McDermott from reaching across the aisle and being effective, so that all 7th District constituents really get from their current Congressman is standard, boilerplate liberal votes. "He's a good vote," Hughes told me as we paddled across Puget Sound. "But sometimes he's an impediment to good legislation."

But all that aside, where exactly does Hughes have a policy disagreement with McDermott?

I did a lot of poking around as Hughes and I talked, and only came away with two clearly delineated disagreements:

1) Hughes is calling for term limits for Congressman (shocker) and McDermott (shocker) opposes term limits. Worth noting: Hughes's proposed term limit is 18 years—a nice long career for himself, should he get elected, but of course fewer years than McDermott has already served (so as to make the point about McDermott's long tenure).

McDermott spokesman Kiriakos responded: "That's not really term limits." Anyway, Kiriakos continued, "My boss has always maintained that there are already term limits. They're called elections. If voters don't like what he's doing, they'll kick him out."

2) Hughes goes a bit further in support of marijuana legalization than McDermott does. He talks about a "get high for higher education" policy—which, beyond the soundbite, means he wants marijuana legalized, regulated, and taxed to help the state meet its responsibilities.

As a result, Hughes supports this fall's Initiative 502. McDermott hasn't taken a position on the initiative yet. "Jim supports the legalization of medical marijuana," Kiriakos said. "He has not taken a position, though, on I-502, which as you know, would go further than medical marijuana laws and legalize and heavily tax one-ounce sales of marijuana to people 21 and over from state-licensed stores. He thinks there are more pressing issues facing the nation that need to be dealt with than the legalization of pot for general use." 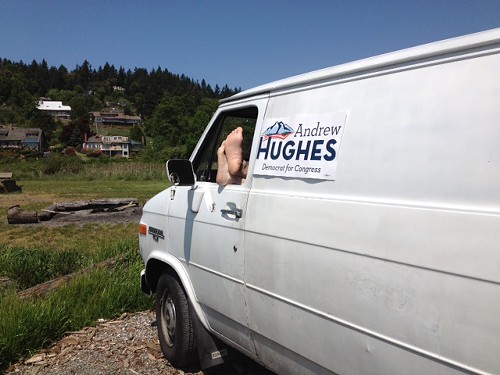 I'm told there will be more policy differentiation coming, as well as a campaign unlike anything McDermott—and, if the talk is to be believed, all of Washington State—has seen in a long time.

"We will knock on more doors than any candidate in this state in 20 years," promised Hughes's consultant, Jeff Upthegrove, as we sat on the beach at Normandy Park Cove.

The goal: 70,000 doors. The lore from everyone in the campaign: Already, as they're knocking on doors, they're finding "very soft" support for McDermott.

"Most of them have never seen McDermott at their door," Hughes told me.

Upthegrove said the campaign is aiming to raise $500,000—and has already cut back on a burn rate that pretty much torched the $200,000 Hughes has already raised, leaving him with just around $30,000 cash on hand at present.

All well and good, and interesting. But really. Do they really believe they can do this?