The Passion of Saint Genet Has Begun

And it has already included cops at dawn, with rifles drawn, trying to stop one of the performances. 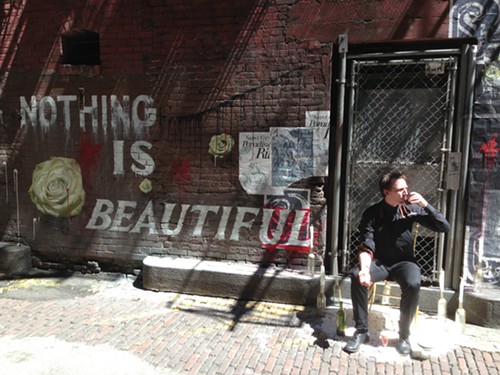 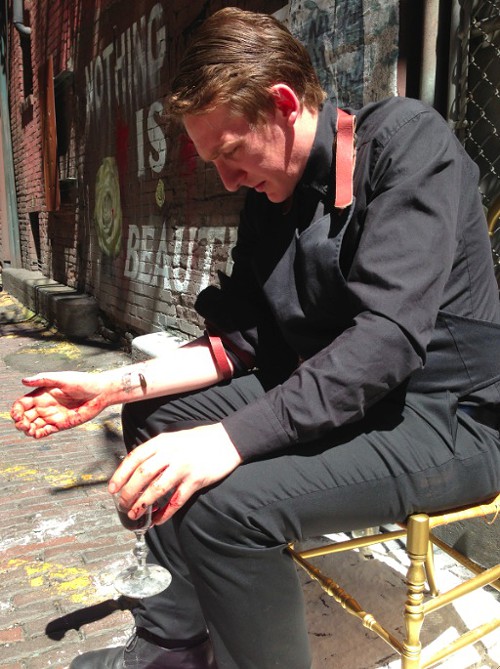 Quick primer: Starting tonight, Saint Genet will be performing its Paradisiacal Rites at On the Boards. Saint Genet is an extraordinarily polarizing company that creates exquisite, and sometimes painful, "actions and images" instead of plays.

Some people adore them. Some people loathe them. But say what you will—they are insanely disciplined in their excesses, and deeply committed to their vision, as strange as it is.

My Suggests about this weekend's show is here:

It’s put up or shut up time for Saint Genet, their detractors, and their defenders. For years, company member Ryan Mitchell has said he wants to make a work not in a theater but on a city. Now is the time. The company has been working for years on Paradisiacal Rites, an “opera” that just had its trial run in Austria and promises, Dante-like, to descend into seriously ugly shit in an attempt to find paradise. Their dramaturgy has included ballet, cults, gold leaf, leeches, shooting each other with BB guns, nitrous oxide, and a rigorous investigation of criminal-artist Jean Genet and his hagiographer Jean-Paul Sartre. Frankly, I’m a little worried.

But this weekend of Saint Genet is an ongoing thing, starting this morning with a dawn "ritual" performance at an undisclosed location several miles outside Seattle. Maybe five people and Saint Genet director Ryan Mitchell attended. I don't know the exact content of the performance—I wasn't there—but I'm guessing it involved wine and leeches, two of Saint Genet's favorite things.

Since then, Mitchell has been walking slowly from the site to On the Boards. He made a pit stop at an alley in Pioneer Square where a few people stopped to watch. Some (such as Scott Lawrimore and Yoko Ott) are Saint Genet regulars. Others were random passers-by.

Mitchell sat in a chair, in a circle of white dust, surrounded by lit candles, leeching himself and drinking wine. He looked exhausted and said he had been up all night in tech for tonight's opening.

He said he had already drunk two bottles of red wine and would finish his third just before the performance began. He looked pretty steady for a man who'd drunk two bottles of wine that day. "How'd you train your liver to do that?" I asked. "I don't know," he said. "I must've done something bad."

He also said that during the dawn performance, two cops—I don't know whether they were SPD or sheriffs or what—showed up with guns drawn, asking them what they were doing.

Mitchell is currently on the road, walking alone through Seattle, making his way to On the Boards.

Paradisiacal Rites will begin at 8 pm tonight, but the larger Saint Genet performance began at dawn this morning, and will not end until Sunday.