What does Amazon have to do with the CIA? In last month's interview with Charlie Rose on 60 Minutes, Jeff Bezos briefly let drop the fact that Amazon was building a "private cloud" for the CIA. And then yesterday, Jeremy Scahill and Glenn Greenwald dropped a big story about how the CIA and NSA are choosing overseas drone targets via metadata, rather than human intelligence:

According to a former drone operator for the military’s Joint Special Operations Command (JSOC) who also worked with the NSA, the agency often identifies targets based on controversial metadata analysis and cell-phone tracking technologies. Rather than confirming a target’s identity with operatives or informants on the ground, the CIA or the U.S. military then orders a strike based on the activity and location of the mobile phone a person is believed to be using...

His account is bolstered by top-secret NSA documents previously provided by whistleblower Edward Snowden. It is also supported by a former drone sensor operator with the U.S. Air Force, Brandon Bryant, who has become an outspoken critic of the lethal operations in which he was directly involved in Iraq, Afghanistan and Yemen... The former JSOC drone operator is adamant that the technology has been responsible for taking out terrorists and networks of people facilitating improvised explosive device attacks against U.S. forces in Afghanistan. But he also states that innocent people have “absolutely” been killed as a result of the NSA’s increasing reliance on the surveillance tactic.

The metadata approach to overseas assassination has resulted in civilian deaths, including a Yemeni wedding party that demonstrators outside Amazon's offices referred to this morning.

Based on a tip I got last night, I headed down to South Lake Union just before 8 am and waited for protesters to show up at the corner of Republican and Terry, the entrance to Amazon.com's main plaza. These may have been the same protesters who briefly blockaded a Microsoft shuttle bus yesterday morning and handed out flyers about rising rents, expensive development, surveillance, uniformity, and what working in the tech sector might have to do with it all.

For the first 20 minutes I was down there this morning, folks were scuttling to work, everyone a little bleary-eyed, wearing lanyards with ID badges and carrying phones, paper cups, binders, and the other things people tote to and from office jobs. A little after 8 am, orange smoke drifted down the sidewalk. About a dozen demonstrators materialized, set off smoke flares, blocked an intersection, and held up a banner saying "CIAmazon." One of them read the text of a flyer (find it at the end of this post) into a bullhorn, saying: "The simple truth is that Amazon, the leviathan that calls Seattle home, is currently building a private data cloud for the CIA. With this cloud, the CIA will be better able to incinerate entire Yemeni families with Predator drones, stalk domestic and foreign dissidents, and keep track of its operatives across the planet. Amazon is now directly complicit in every new death caused by the CIA."

So, if the CIA is using metadata to order drone strikes that "definitely" kill "innocent people," the demonstrators said to the mildly annoyed people on their way to work, and Amazon is building the CIA's "private" computing cloud, and you work for Amazon, you're a little implicated in those deaths overseas.

Needless to say, this bit of street theater was not well received. Most shrugged it off, a few shouted variations on the theme "You're so fucking stupid!" and a few chortled about being newly dubbed CIA agents. Security guards conferred in a tense huddle in the middle of the plaza, but when I approached them, they immediately decamped inside one of the Amazon buildings and resumed their huddle.

The demonstrators seemed good-humored about it, laughed off the insults, and mildly heckled some passers-by: "If you work for Amazon, I've got some bad news for you. You work for the CIA to help incinerate families with drones. Sir, you look a little disturbed. I don't think you like working for the CIA, do you? I know you don't like Bezos. Just tell him to go fuck himself. It's really that simple... All right, just go to work, don't even think about it. And you, keep walking your dog!"

As I said on Slog yesterday, these demonstrations are more like conversation-starters than anything else. The demonstrators seem to be playing town crier (a role that is important or exasperating, depending on who's talking), popping up here and there to briefly disrupt the rhythm of everyday life and point toward this or that issue.

I, at least, had never watched the Bezos interview on 60 Minutes or connected the dots between Amazon, the CIA, and drone strikes. I wonder where (or if) they'll turn up tomorrow morning. The tipper who sent me to South Lake Union has not returned my calls. 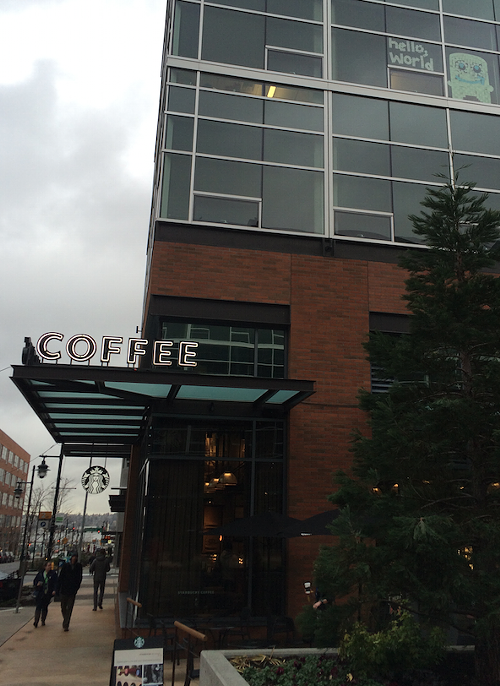 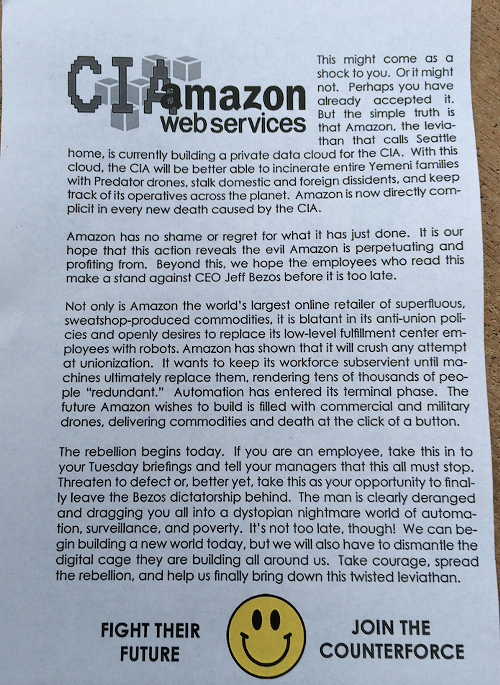