The Strangest and Most Influential Movie Spectacular Never Made: Jodorowsky's Dune

It's unlikely I'll see a better documentary this year than Jodorowsky's Dune.

Or to put it another way, it's unlikely I'll see a documentary this year that features more of my favorite stuff: colorful characters, fabulous illustrations, gossipy anecdotes, hilarious asides, and even a cameo from the subject's cat (no documentary is complete without one).

While the making-of documentary is a standard feature on DVDs and Blu-rays, the unmaking-of documentary, like Serge Bromberg's Henri-Georges Clouzot's Inferno and Keith Fulton and Louis Pepe's Lost in La Mancha, which documents Terry Gilliam's tragicomic attempt to take on Cervantes, are more recent developments.

The Grand Illusion will be screening The Holy Mountain and El Topo in the months to come.

Jodorowsky's Dune follows that template by documenting Chilean-French filmmaker Alejandro Jodorowsky's two-year odyssey to bring Frank Herbert's sci-fi classic, Dune, to the silver screen. It's a fascinating story about what might've been a fascinating film, but Frank Pavich's real ace in the hole is the 85-year-old Jodorowsky himself, a charismatic raconteur who speaks in a mélange of English, French, and Spanish (Pavich has been kind enough to provide subtitles).

The director provides a paucity of information about Herbert, a former reporter for The Seattle Post-Intelligencer—one of the documentary's few failings—but his film works double-time as a profile of Jodorowsky by looking at his experimental theater work in Mexico, followed by the hallucinogenic art house films that would make his reputation, namely El Topo, The Holy Mountain, and Santa Sangre. 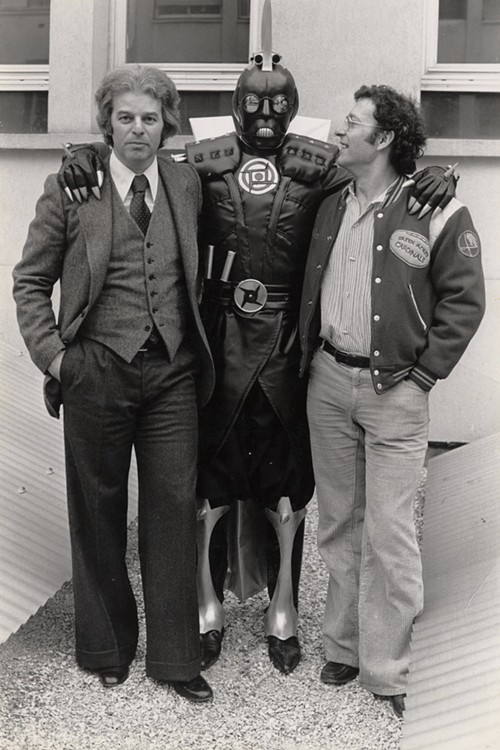 When the chance arose to adapt Dune in 1975, Jodorowsky leapt at the chance. The story about an interstellar battle over an all-powerful spice resonated with the director, so he set out to find the "spiritual warriors" who would help him to realize his unique vision of the material.

It's at this point that Jodorowsky sets his considerable ego aside in order to sing the praises of Jean "Moebius" Giraud, who provided the storyboards, H.R. Giger and Chris Foss, who contributed artwork, and Dark Star's Dan O'Bannon, who designed the special effects. (Moebius died in 2013; O'Bannon in 2009. Diane O'Bannon speaks on her husband's behalf.)

Then Jodorowsky cojoled a dream team of actors, including Mick Jagger and Orson Welles, plus two internationally renowned prog-rock acts to score the music for the opposing factions: Magma and Pink Floyd. With all the principals in place, Jodorowsky and producer Michel Seydoux set out to secure funding to shoot the 10-hour movie—only to watch their immaculately-constructed dream die. In retrospect, it isn't the least bit surprising, since they took their blueprint for the world's most ambitious interstellar epic to such bastions of conservatism as Disney, when they could've been following the European model that allowed Rainier Werner Fassbinder to direct World on a Wire and the 16-hour Berlin Alexanderplatz for German television.

So, it never happened. While Gilliam continues to try to get The Man Who Killed Don Quixote off the ground—talk about tilting at windmills—Jodorowsky and Moebius changed course by channeling their creative concepts into a series of acclaimed graphic novels, like The Incal, which would be ingenious enough, but their aborted project would transform the science-fiction cinema to come as Giger, Goss, and O'Bannon went on to shape the look of Ridley Scott's iconic Alien, which would in turn, influence countless other space operas. And lest that seem like a stretch, Giger, one of the most bizarre humans to appear on screen this year, had no interest in the movie business until Jodorowsky talked him into it.

Though the reviews for Jodorowsky's Dune have ranged from positive to ecstatic, an acquaintance of mine with a particular interest in the subject has dismissed it completely for a lack of dissenting voices. I honestly have no idea what he's talking about. Jodorowsky never got to make his film, so it's impossible to say whether it would've been any good or not. The same acquaintance also claims that the documentary didn't tell him anything he didn't already know, but I believe most viewers, science fiction fans or otherwise, will feel otherwise.

Not too surprisingly, Jodorowsky believes his Dune would've been everything David Lynch's 1984 adaptation wasn't, and I'm sure he's right, but it seems just as likely that it would've been a sprawling mess punctuated by moments of dazzling brilliance. And yet, Pavich has constructed one of the most exhilarating documentaries I've ever seen because his true subject is creativity. Herbert's book, for reasons that even Jodorowsky can't completely articulate, freed something in the filmmaker that made him want to reach for the stars and to convince his favorite artists to come along on the journey. Sometimes that's enough.

Jodorowsky's Dune opens on Apr 25 at Sundance Cinemas. Jodorowsky's new film, The Dance of Reality, which reunites him with Dune producer Seydoux and star Brontis Jodorowsky (his son), opens at The Grand Illusion later this year.
The Stranger depends on your continuing support to provide articles like this one. In return, we pledge our ongoing commitment to truthful, progressive journalism and serving our community. So if you’re able, please consider a small recurring contribution. Thank you—you are appreciated!
CONTRIBUTE NOW