Seattle Reacts to the Worst Decision RuPaul's Ever Made 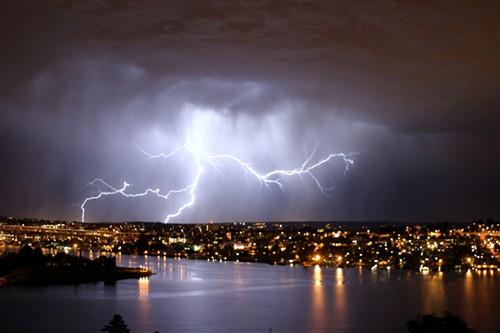 Gay Seattle lies under a dark cloud of shock, disappointment, and confusion today. Ben DeLaCreme has been eliminated. Oh shut up about spoilers—it's common knowledge now. Even Helen Keller knows. Just ask Helen: This season of RuPaul's Drag Race is fucking over. Done. Who will inevitably win the crown? Who gives a flaming bag of Chihuahua turds? Who DIDN'T win is the matter at hand here.

At this juncture there's been no word from the mayor's office, FEMA, or the International Red Cross, but here are some reactions from other local drag performers and related experts:

Gaysha Starr, drag empress
"This whole season is a disaster. Half of the queens shouldn't have been on there and as we were getting to know them they were eliminated in the wrong order. The editing has become so awful it discredits the queens for drama and attention. They caved into SheMail and RuPaul herself never bothered to address it. While Bianca deserves to win and should now with Ben leaving, RuPaul herself seems to favor Adore."

Olivia LaGarce, drag queen
"I WANNA CRY!! I had heard from a few people that she was gonna make top three! I can't believe Darienne got to have the satisfaction of sending Ben home. That just makes it so much worse! Her runway looks last night were SO terrible! Her final look looked like she had vagazzled her fupa and it went all the way to her knees! I am dead. Just dead."

Terry Miller, drag queen by association
"Season Finale as far as I'm concerned. This has been a pretty dull season with Ben being one of the only bright spots. My Mondays are now freed up. And remind yourself: this is a facking TV show we have been bamboozled into watching. Plus 20 minutes of commercials."

Dominic Holden, repressed drag queen
"I've never seen the show—I'm the only fag in Seattle who hasn't. I'm bad at being gay. Even my rainbows are gray. In unrelated news, I've always loved Ben. I heard he was once on the teevee."

Sarah Rudinoff, drag queen adjacent
"They write the narrative they want to write but this one was a shocker. I think they call it 'good TV.' The good news is—BenDeLaCreme is great live. I would be scared to death if I was in the finals but couldn't deliver when I went out in the world to do my thing. BenDeLa's song she sang at the viewing party last night at Century Ballroom was one of the best things I have seen her do—merging boy Ben and DeLa in a funny, unique, and smart way. This show let her show all her/his sides so amen for that."

Major Scales (AKA Richard Andriessen), drag queen coconspirator
"It was like watching Passion of the Christ with Dela as the star. The good thing is, she has a plan. She has made herself a drag household name, and can now throw her wig's weight around the globe. I just can't wait to see her take what she does and make it bigger and better for a much wider audience."

Isaac Scott, drag queen hostess
"BenDeLa was the queen that changed drag for me. I had a very narrow view of what drag could and should be for a long time. When I got a chance to work and talk with Ben, I realized that drag really could be anything you wanted it to. She showed me there was more to it than I ever thought. As a result of this, I was very sad to see her go. I am however glad that the rest of the world got a chance to learn something from this fabulous human being and entertainer."

Adrian Ryan, me
"I could totally barf! I want to punch television in the chode! I've cried all the damn tears. Drama and ratings are wonderful things, I'll be the first to admit, but please don't put them before real and true talent. RuPaul! I'm looking at you. Ben was robbed! And everyone knows it. I'm signing this Change.org petition forthwith! And Ben? Good, night, sweet princess. You went down bravely and gloriously. We are all so damn proud of you."