If you've ever been to Discovery Park, you've almost certainly passed by the smattering of historic butter-yellow buildings not far from the main entrance. Discovery is Seattle's largest park, a former military fort that today is a bewildering mix of army relics, residential housing, and habitat for bald eagles and great blue herons (two birds who do not live in harmony). But the Seattle artist Tia Kramer was drawn to those yellow buildings.

They ring the original oval parade grounds of Fort Lawton, and they were built in the first decade of the 20th century, when they were equipped with mineral-oil lamps and only later converted to electricity. Today they're protected and maintained as historic—but sealed. The doors and windows are locked, the interiors inaccessible. All function has vacated. They've become abstract studies in structure and emptiness. They are not normal. You feel it walking by.

Last weekend, Kramer invited a group of dancers to interact with the buildings in a performance called Five Silent Structures. They carefully and slowly ran their hands across railings, leaned against columns, pressed their foreheads to pillars, faced off with unyielding walls. Nina Bozicnik, Henry Art Gallery's assistant curator, said the performance lent a tactility to the buildings that gave people the chance to see their histories and shapes anew. The performance was a a satellite event included in the group art exhibition It Is a Door and a Window That Make a Room Useful, up through tomorrow at SOIL. The title comes from the Tao Te Ching: "We make doors and windows for a room, but it is the empty spaces that make the room livable."

The skin and bones of a building are alluring, but only there to make meaningful emptinesses. Kramer and Boston-based artist Venetia Dale organized It Is a Door and a Window because they purposely create objects with meaningful emptinesses. A row of tools hangs on the entryway wall at SOIL. At first they seem like regular tools: scissors, tongs, wrench, cup measure, apple corer. But Kramer has painstakingly sealed off the empty spaces that are needed to make the tools function. Using fine paper she beat and dyed to match the color of the tools and blend in, she covered the cup measure, filled in the scissor handles. The shape and power of what isn't there in any physical object come to the fore.

The reason this idea interests Kramer and Dale is that as artists and craftspeople, they make refined things. Buyers, museums, and galleries are interested in the finished objects, but the hours and techniques and meditations that go into each one are lost—unless the final objects are designed to point to those histories the way the sealed buildings at Discovery Park point to their histories. 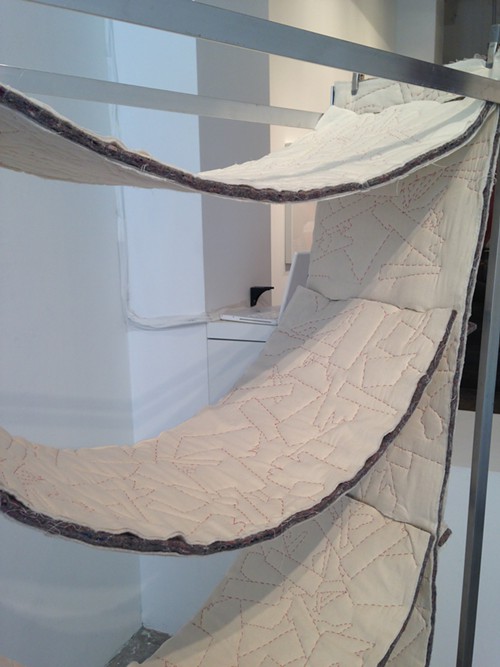 The rest of the sculptures, photographs, installations, and videos by Kramer, Dale, Christalena Hughmanick, Jovencio de la Paz, and Barbara Smith in this very good, under-the-radar show all call for a double consciousness: attention both to what's in front of you, and its life before now, its history. In an artist residency at the Kohler factory, where porcelain objects are made impeccably by highly trained craftspeople, Dale used the medium instead to cast the two halves of the styrofoam boxing that protects precious objects when they travel. Her open-faced wall sculpture Bowl isn't a bowl, but two pieces that together contain the space for a bowl, and promise to safeguard it until it reaches its destination.

Hughmanick made a soft bookshelf with sagging fabric shelves. The pattern stitched in red thread into each surface is a pattern she took from planks of actual bookshelf plywood. She matched the stitching precisely on the top and bottom surfaces of each thickly insulated shelf. It must have taken hundreds of hours to recreate pieces of artificial wood whose entire appeal is that they appear in an instant, manufactured by being pressed together by machines rather than grown over hundreds of years in a forest. You only figure out what went into the sculpture slowly, by long looking, noticing finally the matching stitching and making the plywood association. The piece's effects arrive gradually, not instantly, in a flow that keeps coming.

Slog PM: Wyman Is Out, Microsoft Is Up, and There's About to Be a COVID Vaccine for Kids

by Chase Burns and Isabella Garcia

Bezos and Boeing to Build a Business Park in Space