Reviews of (Pretty Much) Every Single Band That Played Bumbershoot Sunday

We made it to day two of Bumbershoot! We saw even more bands today, and reviewed all of them! Most of them! A large portion of them! 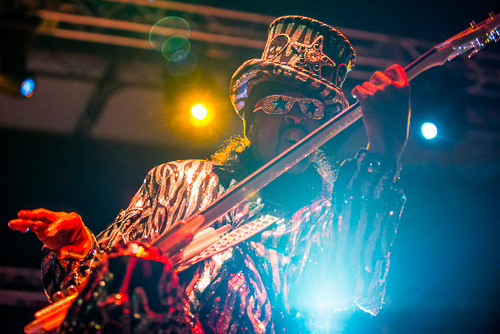 Bootsy Collins: Josh Bis tells us, "More than a decade ago, the EMP put its beloved/ridiculous 'Funk Blast'—a simulated roller coaster that taught the masses (and Rufio from Hook) about how to keep it funky by STAYING ON THE ONE —into hibernation to make way for the Science Fiction Museum (and Hall of Fame). Tonight, a crack in the space time continuum brought some of that spirit and more back to the heart of Seattle Center through the miraculous talents of Bootsy Collins and his amazingly funkadelic crew." 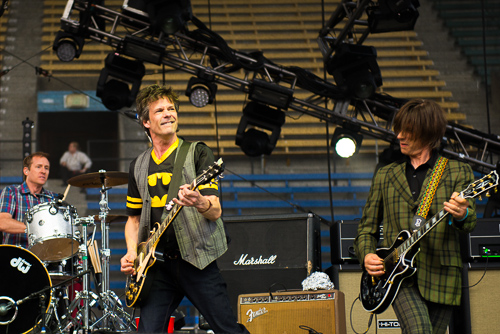 The Replacements: Robin Edwards tells us: "Cool dads swarmed the main stage to rock out to the Replacements, who delivered the hits (despite forgetting a few lyrics now and then) with humor and heart-swelling guitar melodies as the fathers threw their toddlers up in the air to the sounds of 'Alex Chilton' during the finale. 'We don't do good playing in the daylight; we're a bar band,' lamented bassist Tommy Stinson; 'They are killing it,' countered a young longhair who will probably be a cool dad himself one day. " 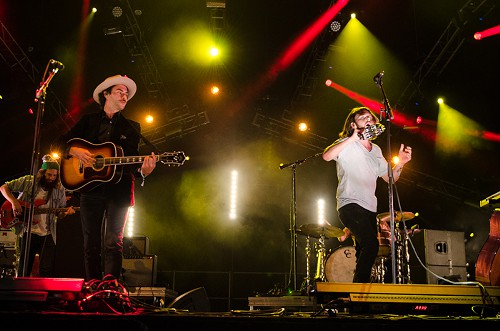 The Head and the Heart: Beth Crook tells us, "Head and the Hearts folky pop set at Memorial Stadium was loved by many; parents, that kid who just got out of the EDM show with the light up sunglasses, and the solo dancer way in the back. But it was the teenage masses in the front who waited patiently to sing along to the hits (which seems like all their songs) for Head and the Heart's energetic, complete-with-psuedo-crowdsurf, hometown show." 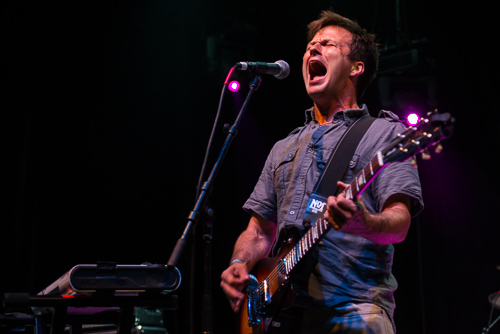 Dismemberment Plan: Bree McKenna tells us, "An eager crowd gathered 'round the stage as Dismemberment Plan ripped into heartfelt shredding. On the outskirts beyond the thick layer of Dismemberment Plan superfans, a girl turned to her friend and asked, 'wait, what's the deal with them again—they're like, a reunion band? Is that like, every band at bumbershoot today or what?'" 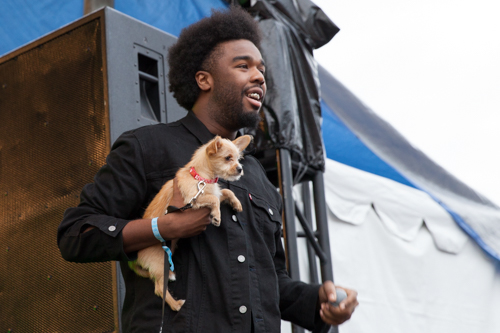 Iamsu!: Kyle Fleck tells us, "Iamsu!'s hyped up party raps got the crowd of appropriately-stoned high schoolers chanting along to his sometimes questionable boasts re: beating up pussies, etc. 'That guy should pull his pants up,' observed an older attendee, unimpressed with his bright red tighty-whities." 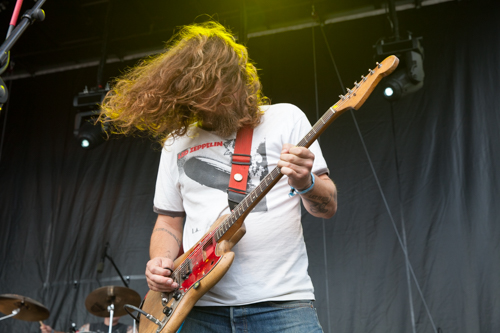 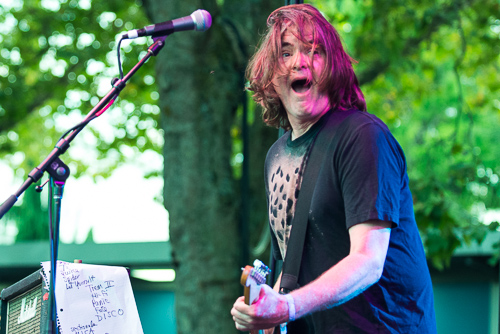 Mission of Burma: Bree McKenna tells us, "Mission of Burma played a tight set of fuzzy jams to a crowd wearing worn-out original '90s Lollapalooza/Sonic Youth/Pearl Jam concert tees, but everyone there seemed a little tuckered out after the Replacements. Even the usually-rambunctious Wimps bass player Matt Nyce was taking it down a notch, 'They're so good, I like them, but my feet hurt so I'm gonna sit down,' he explained."

Negativland: Dave Segal tells us, "Negativland's subtlety is too humorous for a festival crowd, and it sent the jackass kids who were yelling 'Drop a beat!' and 'Let's get it!' scattering after 10 minutes. This set was as hallucinogenic as hyperreality, unspooling an eerie, absurd concatenation of officious and oleaginous media pronouncements and a menagerie of left-field electronic sounds that ranged from tranquil to unsettling. Sensory-overloaded culture jamming at its smartest."

Schoolyard Heroes: Bree McKenna tells us, "Sometimes disbanded punks totally phone in their reunion shows, but that was certainly not the case with the compelling performance by the Schoolyard Heroes to their crowd of ultra-stoked fans screaming along. 'Did you see when Jonah caught the beachball in his mouth and bit it open? It was cool,' commented local kareoke host TV Coarhan afterwards."

ScHoolboy Q: Josh Bis Tells us, "Where children of a bygone era might have responded to a aural assault of air horns as a sign to take cover from impending air raids, the large, overwhelmingly young, bucket-hat sporting crowd immediately recognized the Klaxons as a sign to get TURNT UP for ScHoolboy Q, who later reassured them that he didn’t mind if they'd bootlegged his latest single so long as they kept both hands in the air while looking at him. As if the enthusiasm wasn’t high enough, the end of the Memorial Stadium set was set into a true frenzy when Seattle’s own 'white N-word' Macklemore bounded onto the stage to join Mr. Q for a little game of catch while performing 'White Walls.'"

ILLFIGHTYOU: Kelly O tells us, "Tacoma’s sassiest obviously have the most fun and care the least about pissing people off… and their audience smokes the most weed. They’re stage show is wild, and none of the dudes could stand still nor keep their shirts on. 'It’s hot up here,' rapper Ugly Frank stated, 'And I’m tired ‘cause I stayed up till 7 am this morning doing cocaine in my mom’s basement.'" 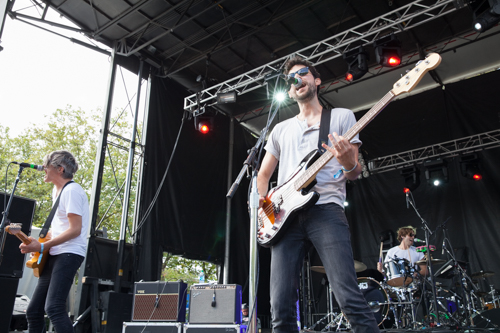 We Are Scientists: Robin Edwards tells us, "Nonchalant festival goers gently bobbed their heads up and down for We Are Scientists' Strokes-y, inoffensive post-punk tunes. 'Meet you at the McDonalds tent?' said one teen to another as they ducked out of the set halfway through."

Luscious Jackson: Kathleen Richards tells us, "Luscious Jackson's groovy, hiphop-y spirit has mellowed somewhat with age, fittingly so, considering their demographic (moms with young kids). Their set felt like a slumber party at times, especially when they invited fans onstage to dance. The dudes-only rump-shaking session was pretty hilarious."

The Dream Syndicate: Dave Segal tells us, "The Dream Syndicate's dual-guitar attack from original member Steve Wynn and new guitarist Jason Victor was as tight, vicious, and loud as Contortions', the Pop Group's or the Velvet Underground's circa 'I Heard Her Call My Name.' They focused on the best cuts from the immortal debut LP, The Days of Wine and Roses, but also threw in a raging cover of Blind Lemon Jefferson's blues standard, 'See That My Grave Is Kept Clean.' This fiery set was a total Wynn/win scenario."
Jarv Dee: Kyle Fleck tells us, "The beatific beats 'n' synths of Manatee Commune were easy enough on the hungover noon peeps, but the real wake-up call came with Jarv Dee's Moor Gang-assisted 1pm set. Despite less-than-ideal attendance, Dee got enthuiastic crowd fist pumping to his nihilistically banging beats and serpentine rhyme schemes. Big ups to Nacho Picasso's hot-pink sneakers as well."

Golden Gardens: Dave Segal tells us, "Led by the creamy, angelic singing of Aubrey Rachel Violet Bramble, Golden Gardens proved themselves to be Seattle's premier goth-gaze-techno outfit at the Pavilion Stage, which couldn't be a more sterile environment for live music. The trio—all dressed in black—seemed to have been beamed in from a European metropolis circa 1989, blurring elements of Durutti Column, Cranes, and '90s German techno from the Tresor label."

Sandrider: Kathleen Richards tells us, "Seattle is a city known for its rock bands, but you wouldn't necessarily know that by this year's Bumbershoot lineup. Nonetheless, Seattle's own Sandrider handled the pressure of being one of the festival's few hard rock acts with pride, pounding out headbanging riffs and throat-bleeding screams with a ferocity that kept a kid in a Thou shirt pumping his fists while other youngsters attempted (but largely failed) to get a mosh pit going. Afterward, one of them yelled to singer/guitarist Jon Weisnewski, 'I wanna buy your album!'"