The Monster Art Show With the Soft Underbelly: What Happened at NEPO 5K on Saturday

NEPO 5K Don't Run is an art scavenger hunt, playful by design, and every year, there are funny spectacles and goofy interactive performances, and it all ends at a beer garden. But the secret to NEPO's success is that it also has a tremendously delicate underside, which was in extra-full effect this past Saturday, out there in the blazing sun as we walked the route from Hing Hay Park in the International District to Klara Glosova's house on Beacon Hill. (Glosova is the Seattle artist who invented NEPO 5K Don't Run, and now she co-curates it with a team of artists.)

To navigate the necklace of artworks, you get a hand-drawn map with admission (this year's by MKNZ Porritt), and it tells you where to go, where the art is, who made it, and what it's called. This is the only way you could have known that the woman hunched over a tiny spotted egg cupped in her palm, sitting silently on a high stool next to the sidewalk where the noisy men were playing mahjong, was the artist Callie Swedberg doing an endurance performance artwork called How to Hold and Care for Precious Things.

The men playing mahjong were a gift to the art, their commotion making the holding and caring for precious things seem especially necessary, and this is the sort of thing that can happen at the NEPO 5K Don't Run, which is why it's so great. It doesn't happen in a gallery district. It carries you through mindbogglingly disparate landscapes in a short span of distance and time: postindustrial side streets and alleys, major traffic thoroughfares, an overpass with views of the tangling freeway ramps and the huge sports stadiums and Puget Sound, multiple parks, and a midcentury neighborhood where bright, boxy condos are popping up in the midst of great big evergreens and modest Craftsman bungalows and rambler houses.

The established registration ritual, at Hing Hay Park before you embark, is to pick up a race bib with a word on it rather than a number, in an installation by the Vis-a-Vis Society. There is no winning or losing, only the task of embodying your chosen word as you do the walk. The words are arranged on a board, waiting for you to pick one, in alphabetical order from "Agreement" and "Apology" to "Ululation" and "Wrestling."

Early in the walk, the man who'd chosen the word "Intestine" posed with a pale, abject, abstract sculpture piled on the sidewalk by Francesca Lohmann. It appeared soft but was hard to the touch; its saggy, crawly weight was dissonant with the pretty, scaly details of its skin. It was quiet, on a quiet stretch of street near Megumi Shauna Arai's huge mural poster Cloak, a contemplative, atmospheric black-and-white photograph of a man with dark eyebrows and a dark moustache wearing a soft, white cloak over his head, seen from the side—or, mostly obscured.

Under the I-5 overpass, in an area where an increasing number of people sleep who don't otherwise have somewhere to go, the artists Yael Nov and Joanna Stillwell built a meditative garden to brokenness. To an existing expanse of jagged gray rocks on the ground, Nov and Stillwell added sunbursts made of one larger brown rock taken from another landscape and surrounded with shards of a broken ceramic plate arranged like rays of light. It looked like the rocks had fallen from the sky on top of the plates, broken them perfectly, and decided to stay as these new, Zen-like beacons.

Up on the overpass, you're discovering art at your level and also far, far down in the wild ravine below. Reilly Sinanan tethered a rowboat on the dry, high land to a cleat screwed into a white wall in the middle of a clearing. It felt like the boat was waiting to take you somewhere. 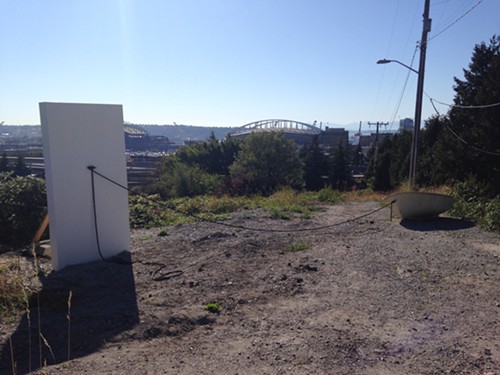 Was the artist Kristin Schimick okay down there under the sun? Was she performing for the entire five hours of the 5K? What she was doing looked like an ancient pagan ritual. She walked in a continuous figure-eight pattern around an installation of rocks she had laid down on the ground. When I got there in the late afternoon, she was picking up rocks as she went and building a small pointed tower structure. The project, called Interchange—and happening at the base of the many interchanges getting onto and off of I-90 and I-5 right there in southern downtown—looked like it shared something with her previous Infinity Loop. She was mesmerizing to watch, this tiny speck just walking and hand-building within this huge-scale, zooming landscape of cars and stadiums.

A little ways past Schimick's installation came a row of mirrors installed by Rebecca Cummins and pointing out toward the stadiums, sort of like a pathway for a vain giant. The mirrors were circles laid flat on the ground, so they also looked like a line of lilypads to be hopped across to get from close to far, big to small, or small to big. She called them Bounce, and it was the sky that bounced up off them. They looked like they got smaller as they receded, but that's just how receding objects look. 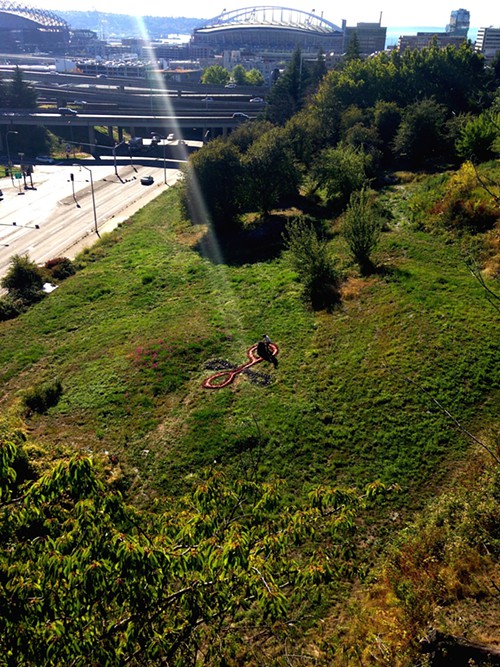 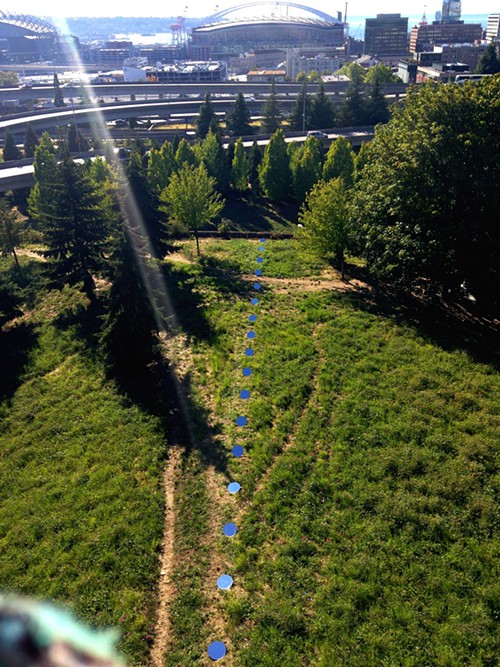 Up on Beacon Hill, you hit Daejon Park, the large grassy open area overlooking the Central District in the distance, and another, forested and just-being-developed area called Lewis Park. Last year at NEPO, people in the neighborhood stood at a little booth, handed out tiny bottles of water for free, and described how they wanted to add trails to the thickly forested area between Daejon and their houses above. Now they were out there demonstrating that they're doing it! (Watch their blog for an October kickoff event.)

Climbing up the trail leading into Lewis Park, Aaron Murray erected a miniature world right on the ground, by arranging sticks, rocks, leaves, wood carvings, and found objects that led you up to a hut for a hermit. He called it The Hermitage, referencing both the cluster displays you find in cases at museums like the Hermitage, and the hideaway nature of the forest. It was completely lovely, like visiting another world for a while. 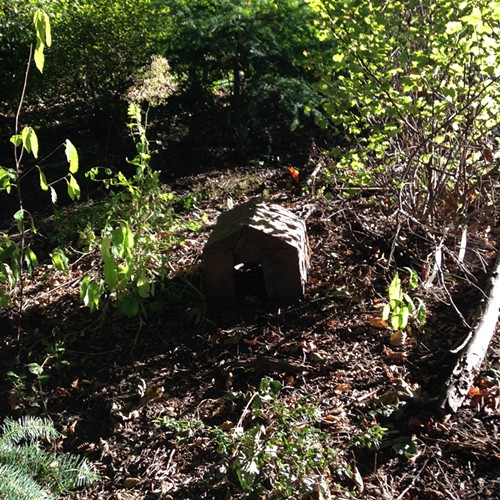 Daejon Park is a hard place to show art, because it can feel like it's splayed out on the lawn like the castoffs in a garage sale. There wasn't always enough space between pieces, but the pieces themselves were a draw if you could isolate them in your mind. One that had plenty of room was Cable Griffith's video feed from his studio, set on a monitor under an umbrella in a stand of trees. He was in his studio, painting landscapes. He called it Plein Air Project(ed). Sylwia Tur's Porcelain Plantations was a garden of small, white enigmatic shapes laid on the grass. They brought to mind a rudimentary 3D map of a secret territory of encampments. 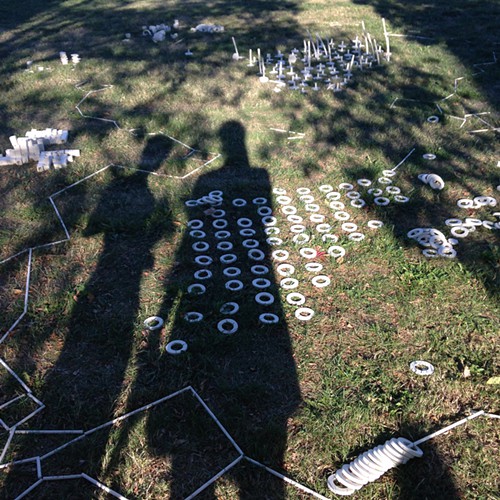 Amanda James Parker's contraption The Garden of Light was an improvised stained-glass cathedral without any glass, and it worked like this: 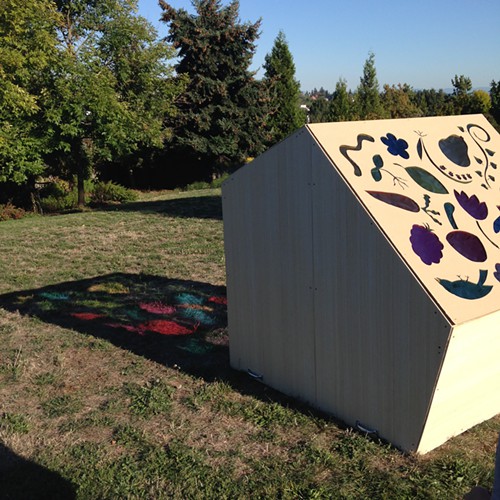 Two installations in the park made explicit reference to pop-up, temporary architecture and the global labor market: Marek Stepan's kiosk made of stacked banana boxes, Ora Et Labora (is Marek Stepan this guy?), and Eirik Johnson's re-creation, with audio recorded at real mushroom hunting camps, of an itinerant hunter's setup in the Oregon wilderness. The hunter's hut suggested a sort of pioneering subculture, but also maybe something like a homeless encampment, while Ora Et Labora, with its sign inscribed "MINIMAL SPACE FOR A PERSON, referred to the habits of medieval monks in their "pray and work" lifestyles. The sculpture seemed like a confessional box where you also scraped together a living by the side of the road. 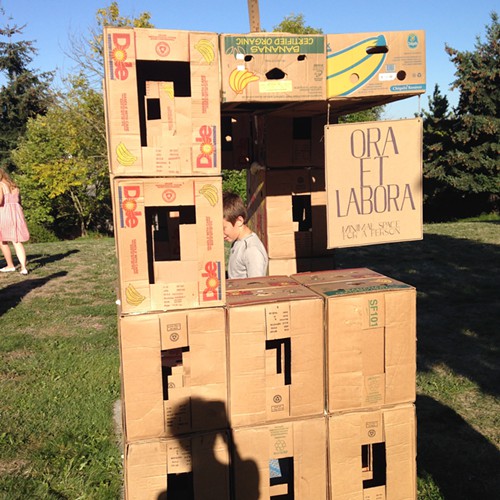 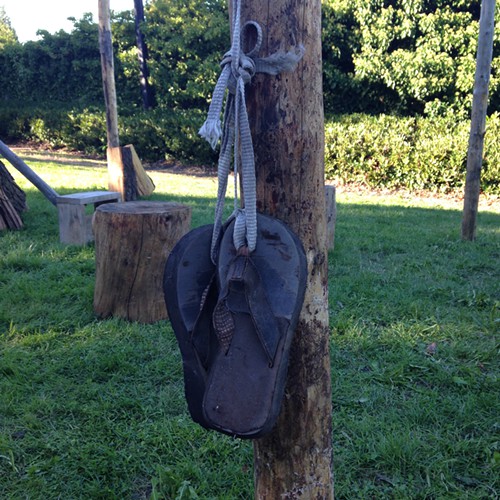 And then you were up in the neighborhood on Beacon Hill. You had to look down at the cracking road to find Maggie Carson Romano's Pharmakon. She filled the broken street's veins with gold leaf. The word "pharmakon" has an ambiguousness built into it, because it can mean poison or cure, and in this case, the gold is both incredibly gorgeous in the street, and also maybe a reference to gentrification and prettification. 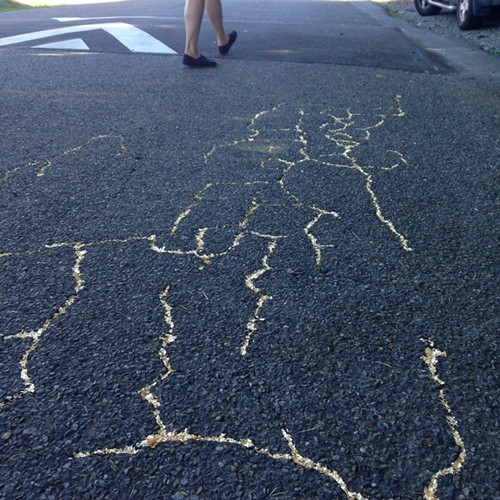 I haven't mentioned in detail several great projects, including rolly geodesic domes kids could get inside by meadow starts with p, Kat Larson's enterable cloudscape Inside of Nothing, and the unbelievable Antiphonal Location performance created by John Teske and Nat Evans, in which musicians played their instruments while moving around each other along a whole span of street, weaving in and around the sidewalks and garages and houses, responding to each other improvisationally but also generally following a series of scored notations on display on music stands up and down the path. There also was a performance by Eric Aguilar called I Guess Nobody Ever Told You All You Must Hold Onto Is You Is You Is You. It involved him lugging a suitcase up and down a steep staircase, and arranging letters on glass plates on the grass, and I didn't get to see enough of it to follow, but I wished I did.

Finally, Rafael Soldi created a romantic oasis inside a garage, in a looping video of two simple white EKGs coming in and out of sync with each other as they rolled by. Heartbeats, it was called. And we were promised, by walkers earlier on the trail, that we would have our negative thoughts evaporated in a purging ritual facilitated by the artist Glenn Herlihy, but by the time we arrived, he had run out of purging supplies and had only a box available into which you could deposit positive thoughts written on little scraps of paper. NEPO is evanescent, and you miss something every time. And what is the state of the golden veins in the street, and the tower of rocks in the ravine, now? 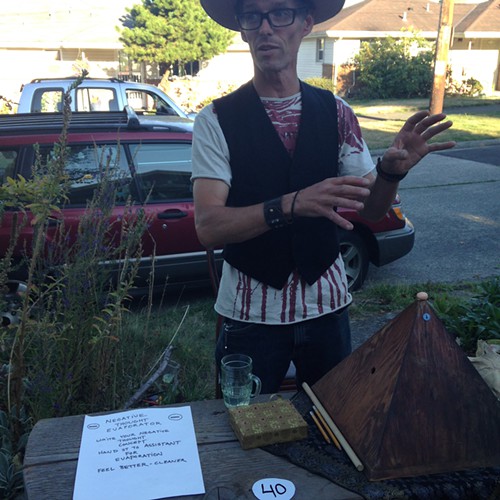 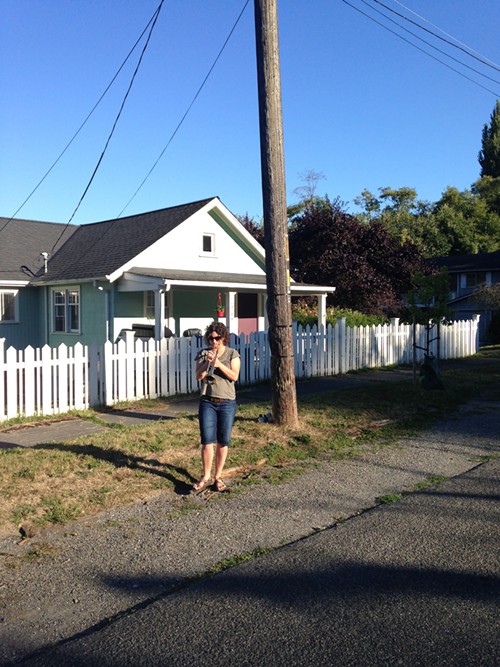 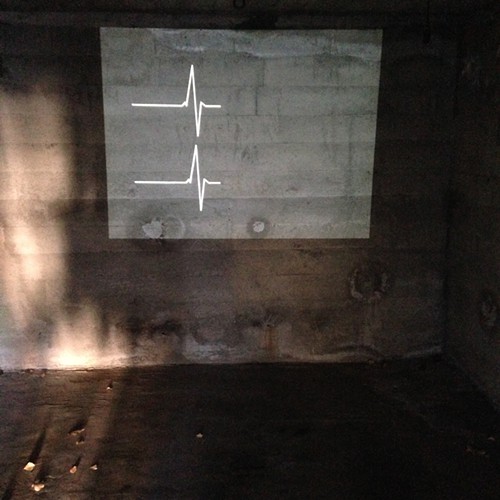 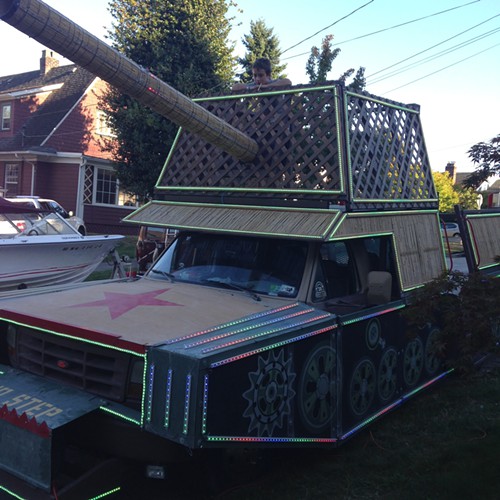 How Does Seattle Stack Up Against Its Sister? Oh, It's Not Good