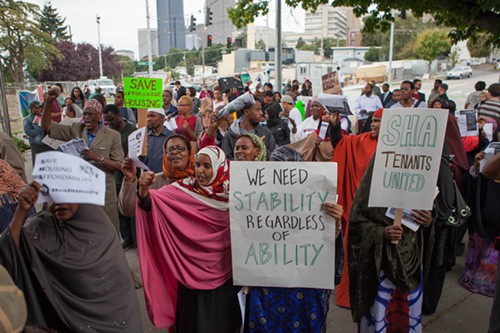 An unusual group of political bedfellows—Seattle mayor Ed Murray, Council Members Bruce Harrell, Nick Licata, and Kshama Sawant, and the League of Women Voters—are opposed to a new proposal by the Seattle Housing Authority (SHA) to drastically raise rents on some public housing tenants, decoupling their rates from their income levels in the process.

Providing subsidized low-income housing is the primary reason that SHA exists, leading some to call this plan an "oxymoron." Today, Licata announced he's asked federal housing officials to investigate whether the plan, which SHA calls Stepping Forward, could have a discriminatory impact.

And on Wednesday at Yesler Terrace Community Center, a room of women, kids, and current and former tenants—many in headscarves, listening through translators speaking languages from all over the globe—as well as housing activists and socialists denounced the plan. In fact, every single person who offered public comment was against it. At one point, Kshama Sawant asked anyone in the room who opposes Stepping Forward to raise their hand. Seemingly everyone did, erupting in a chorus of cheers.

The proposal would affect 7,100 non-elderly or disabled adults in 4,600 households across Seattle—about 35 percent of SHA's tenants. Executive Director Andrew Lofton explained how the rent hikes would work in a series of PowerPoint slides:

SHA says it will require all of the affected tenants to undergo a "self-sufficiency" assessment that includes an education and employment plan, conducted in conjunction with local groups like the King County Workforce Development Council, which runs the employment assistance program Worksource. The council's president, Marléna Sessions, got up and assured everyone that thousands more jobs will be added to the local economy. "It's a great time in our local labor market," she said.

Lofton told me in an interview this summer that SHA's goal is to cycle more people out of its units more quickly and serve more people who are on its waiting list—which is tens of thousands of people long. And Nora Gibson, the chair of SHA's board, which will vote on the proposal later this year, said that as she listened to the testimony, she was imagining all the people not in the room—"the next wave of refugees from Bhutan and Burma."

But Jean Harris, the first woman to speak, radiated wisdom and dignity as she spoke deliberately and slowly, giving time for the translators to do their thing. "I was raised in Yesler Terrace and my mother died in Yesler Terrace," she began. She spoke highly of the SHA's vision in the past—Yesler Terrace was the first racially mixed housing project in the country, back in 1941.

But, Harris intoned, "Are you serving more people as you're pushing people out? Are we actually asked to rubber-stamp a proposal that's already a fait accompli?

"I think they [SHA officials] might be a little short sighted in their vision," she said. "If we had been forced to function under this, I don't know where I would be."

The comments continued in that vein for the next 90 minutes from around the room. One man said Worksource had laid him off and advised the crowd to put pressure on Mayor Ed Murray to appoint better SHA commissioners.

Another complained that Worksource didn't help him learn English or obtain employment. You say we can all get jobs and afford higher rents? He challenged Lofton and the other SHA employees: Learn Somali or Chinese in the next year—then we'll believe you. That got a huge round of whooping applause from the crowd.

SHA wants to move to its Stepping Forward regimen in part because of budget cuts related to sequestration at the federal level, which it says will reduce its funding by $12 million over the coming decade. But the only reason it can propose a plan like this is because it's one of 39 public housing agencies around the country given a waiver by HUD under the "Moving to Work" program.

Last year, an Inspector General audit found serious flaws in the program and said it should not be expanded. Who does support this program? For one, Senator John Sununu—a Republican perhaps best known for making a series of crass and stupid remarks about President Obama.

Sununu introduced a bill in 2006 (HUD was finding major flaws in the program back then, too) to expand Moving to Work to hundreds of housing agencies nationally. That should tell you something about how badly this proposal fits a place like Seattle, where we're already dealing with gentrification and some of the highest rent increases in the country.