The Stranger's Guide to the Best Mexican Restaurants in Seattle 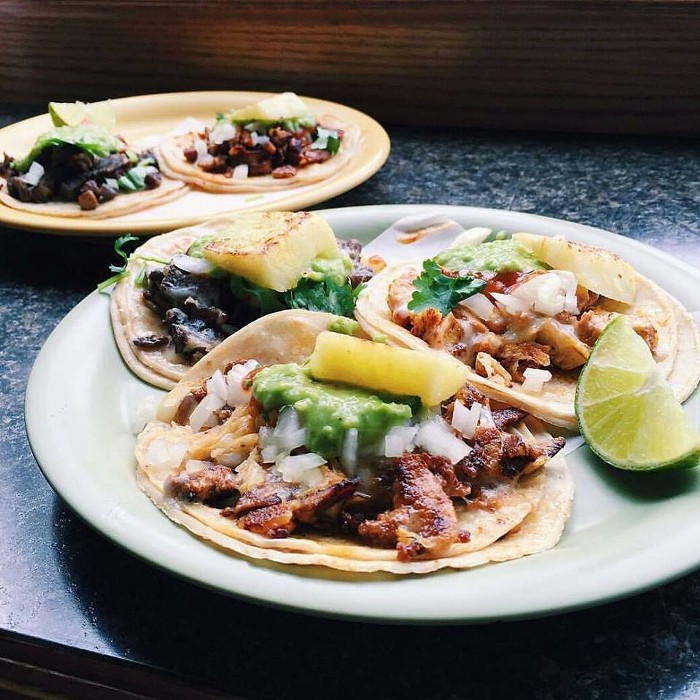 Part of a series of restaurant recommendations offered in The Stranger’s 2017 Guide to Food and Drink (International Edition).

David Orozco reminds Seattle that Mexican food is more than just tacos and burritos from behind the grill of this second outlet of his Mexican steak house, located in Kent. Platters stacked high with mesquite-grilled bone marrow, carne asada, rib eye, New York strip steak, and even Wagyu beef come out of the kitchen along with roasted cactus, chorizo, and beans. Carnivores can dig into their meats with the accompanying fresh flour tortillas and a rainbow of salsas from the self-serve salsa bar in the back of the warm, inviting, wood-paneled room. NAOMI TOMKY

Like the popular trucks for which this local mini-chain is named, El Camión's brick-and-mortar location in Ballard serves up some of the best Mexican food in town, with the added ambience of lucha libre masks and a full bar—not to mention the extensive salsa bar. You're probably here for the burritos, which is sensible, because (A) they are delicious, and (B) one of these near-two-pound, foil-wrapped missiles of meat, black beans, rice, and cheese will feed you, your mom, and the people at the next table for a mere $8.50. But why limit yourself when there are carnitas or spicy adobada tacos, sturdy gorditas piled with earthy cochinita pibil and salty cotija, or bowls of satisfying pork pozole? Breakfast is served all day. JENN CAMPBELL

Fonda la Catrina and its adjacent fish-focused sister restaurant, El Sirenito, are true Georgetown gems. Fonda la Catrina serves contemporary, slightly fancier versions of classic Mexican dishes—tortas, tacos, enchiladas, etc.—alongside a wonderful selection of margaritas. The house margarita is a ludicrous $6 at happy hour. They've also got an excellent brunch menu, and the service and atmosphere is head and shoulders above your average family Mexican joint. Next door, Mezcal bar and fish taco emporium El Sirenito provides all the pescatarian delights your heart desires. The ceviche can be iffy, but when it's on, it's on. I'm also a huge fan of their super fishy pescadillas, tortillas stuffed with fried rockfish, salsa verde, and pickled red onion. TOBIAS COUGHLIN-BOGUE

Seattle's first and foremost Oaxacan restaurant remains as popular as ever, winning Seattle's collective heart with bolder, more adventurous offerings than your typical rice, pinto beans, and enchilada fare. Oaxaca is considered the birthplace of mole, and Carta de Oaxaca's mole negro is indeed a thing of beauty. Get it in tamale form or as a plate with your choice of chicken or pork. The Ballard restaurant also has one of Seattle's better mezcal selections (an obsession that spawned younger sibling Mezcaleria Oaxaca). TOBIAS COUGHLIN-BOGUE

In Central Mexico, Sunday morning belongs to barbacoa—traditional slow-roasted meat cooked overnight in a pit. The closest thing to driving into the hills of Hidalgo here in Seattle is making your way down the aisles of this Greenwood area Mexican market on the weekends. Behind the rows of chilies and cans of hominy, the space opens up: Piñatas decorate the ceiling and families gather for celebrations. The fragrant, rich meat, imbued with the flavors of a long roast, comes by the taco or by the pound, often accompanied by its usual partner—a soup made from the drippings called consommé. NAOMI TOMKY

In "Muy Macho: La Puerca Feminista," Rachel Kessler (The Stranger's early-aughts food critic) eulogized this humble South Park Mexican joint's provocative signage—a bandolier-bedecked babe riding an hombre on all fours—that prompted a six-month closure and subsequent rebranding. Fifteen years later, Muy Macho is still going strong. Why should you go, if not for the militantly feminist signage? La puerca, obviamente. Pozole, beef barbacoa, chili verde—all your down home Mexican favorites are there, and they're all quite reasonably priced.TOBIAS COUGHLIN-BOGUE

Capitol Hill's favorite taqueria just added a second location, in Dexter Avenue's sunless canyon of new apartment buildings. The new spot is a little sleeker, more spacious, and ever so slightly spendier, but the idea is the same: tasty and cheap tacos, tortas, quesadillas, etc. Crowd favorites include the mulitas—basically a cheesy taco sandwich—with your choice of meat, beans, or slices of prickly pear cactus, and the house taco, a corn tortilla with rotisserie-cooked pork adobada, melted jack cheese and guacamole topped with a juicy slice of grilled pineapple. To drink, grab a house made horchata or the ruby-red agua de jamaica. JENN CAMPBELL

It wouldn't be so bad mistaking this place for the similarly named El Asador a few blocks north. That's a taco truck (and a very good one). But what you're looking for here is a taco bus, and you can eat inside of it. Fun! Tacos ring in at $1.75 each and are filled with taqueria standards like carne asada and pork adobada, as well as more adventurous choices like tripe, tongue, and pork stomach. (These can go on tortas, mulitas, and sopes, too.) Full meal options include enchiladas, steak ranchero, and birria de res, an aromatic beef stew. Bring cash. JENN CAMPBELL

Comments 1
Tags: Stranger’s Guide to Food and Drink (International Edition)
The Stranger depends on your continuing support to provide articles like this one. In return, we pledge our ongoing commitment to truthful, progressive journalism and serving our community. So if you’re able, please consider a small recurring contribution. Thank you—you are appreciated!
CONTRIBUTE NOW