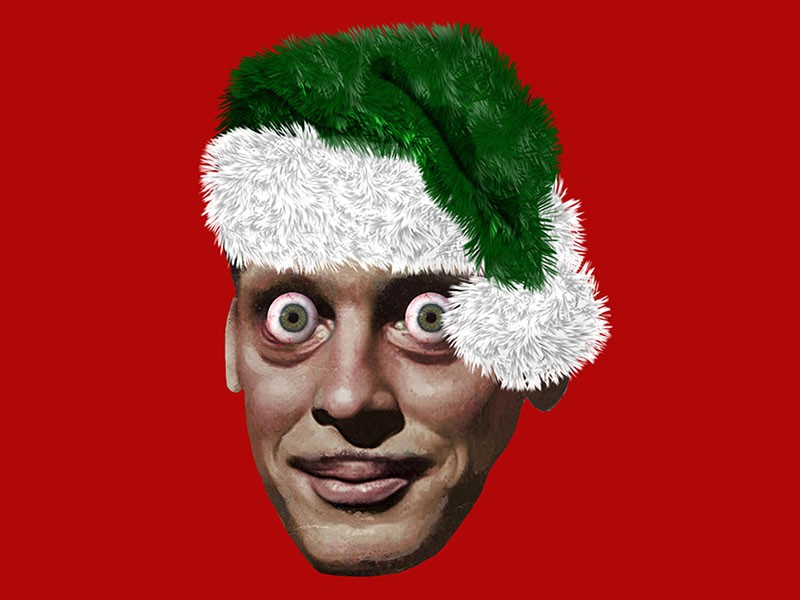 Get your dose of shamelessness at A John Waters Christmas, freaks and perverts. CHRIS JEFFRIES

(HOLIDAYS) The world’s most appalling Christmas spirit returns to Seattle with John Waters’s perverse holiday show. Promising an evening of lunacy and lust, the Prince of Puke will regale you with horrifying stories to warm the hearts of even the most jaded Christmas goblin. Waters tours with a Christmas show every year, and he’s always very diligent about refreshing his tours with new material. When we spoke to him last year, he’d just finished writing his first novel, Liarmouth, and he’s sure to have plenty of appalling never-before-heard stories to share. The great magic of just about any John Waters project, from films to live acts to written words, is that the heroes never feel a drop of shame no matter how depraved their preoccupations are, and there’s never been a more urgent time for all the freaks and perverts to get a refreshing dose of shamelessness. Tis the season! (Neptune Theatre, 1303 NE 45th St, 8 pm, $35) MATT BAUME

UPDATE: Rakim's performance at the Crocodile has been canceled due to injury. Refunds are available at point of purchase.

(MUSIC) There are really two types of rappers: those who came before Rakim and those who came after him. Before Rakim, whose moment was between 1986 and 1990, there was only good wack and bad wack (all rappers were essentially wack); after Rakim, there was wack and not wack. What Rakim did on Eric B.-produced tracks like “Eric B. for President,” “I Know You Got Soul,” “Move the Crowd,” and, later, “Follow the Leader” was not only explode the traditional nursery rhyme-like confines of rap but also compress, in lines, dizzying amounts of words, images, and information. Rakim is the greatest rapper to ever walk this earth. (The Crocodile, 2505 First Ave, 8 pm, $32.50) CHARLES MUDEDE 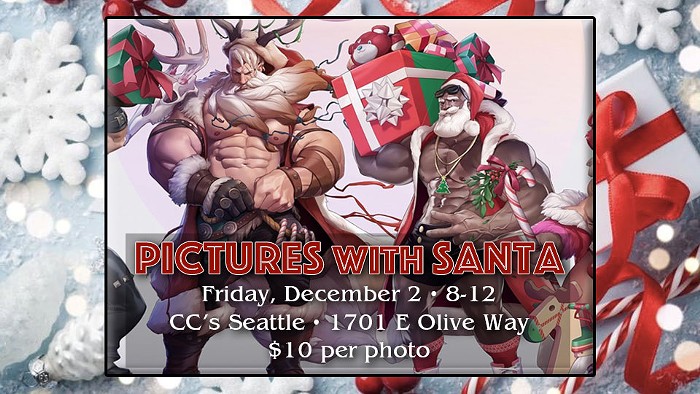 (HOLIDAYS) Get all hot and horny on a leather lap with Seattle Men in Leather’s monthly social. For December, they’ll have a Santa chair set up, with Daddy Dean doing the honors as a seasonal father figure. Naughty elves will also be a-mingling if dads aren’t your thing. For $10, you’ll get your pic taken in the throne, with proceeds going to Rainbow Railroad, a nonprofit that helps queer people escape hostile countries. Seattle Men in Leather has been hosting holiday affairs since the early '90s, when they were hosted by Absolutely Nobody… that is, the club member who had his name legally changed to Absolutely Nobody before running for Secretary of State. (He drew about 7% of the vote, but his mission was to draw attention to government waste.) The group’s parties have a long legacy of being fun, friendly events where all are welcome. There’s no official dress code, but gear of some sort is generally expected. Dress warm if you’re worried about a chill! Or wear as little as possible and request a cuddle. (CC Attle's, 1701 E Olive Way, 8 pm, $10) MATT BAUME

(HISTORY) While walking through the Central District or downtown, I often think about the unnatural forces that shaped the Seattle we know today: housing policy, colonialism, concrete, brick, trade. But, of course, the abundance of capital in our city was preceded by the region's natural abundance—especially that of the Duwamish River. In her book The River that Made Seattle, author and Duwamish River Cleanup Coalition founder BJ Cummings dives deep into the history of the river, its centrality to both the Duwamish people and settlers over the centuries, and how this essential waterway became a waste dumping ground. The book also "explores the previously unrecorded Native and immigrant histories, and exposes settler falsehoods about the founding of the state." (AMcE Creative Arts, 612 19th Ave E, 6 pm, free, all ages) JAS KEIMIG

(MUSIC) When Cleveland's Cloud Nothings released Attack on Memory 10 years ago, the 2012 presidential election was just kicking into high gear. It feels almost silly compared to what the country has seen since, but it truly was a time of unpredictable absurdity. Newt Gingrich, Ron Paul, Rick Perry, and Rick Santorum were all vying for the Republican nomination. People believed the Mayan calendar predicted the world would end in December. Putin was elected president of Russia. There was Hurricane Sandy and Sandy Hook. It was not a great year! For me, the soundtrack for it all was Cloud Nothings' perfectly restless and unrelentingly frustrated Attack on Memory, a rock record that perfectly encapsulated what it feels like to take on a whole world's worth of madness in one still-developing, self-conscious brain. Looking at the world now, and things aren't so different. There are embarrassing presidential candidates, terrifying mass shootings, and disastrous natural events due to global warming, so there's no doubt Attack on Memory will sound every bit as cathartic at Neumos on a Saturday night in 2022 as it did 10 years ago. Maybe even more so, because shouldn't we have figured some shit out by now? (Neumos, 925 E Pike St, 6 pm, $20-$22) MEGAN SELING

(THEATER) I can't decide what I love most about The Wiz, the 5th Avenue Theater's first live holiday show since 2019's Annie. Kataka Corn is a fantastic Dorothy, slowly unveiling the true power of their voice a little more with every song, culminating in the stunning, teary-eyed show-closer, "Home." The horny tap-dancing tin man, clumsy scarecrow, and emotionally complicated lion were everything, too. And the witches! And the Wiz! Truly all delightful! But I think it was the costumes (designed by Jarrod Barnes) and the wigs and makeup (by Kelley Jordan) that were truly phenomenal—dancers turned into mesmerizing swirls of psychedelic colors and glitter during the big dance scenes, at times recalling Nick Cave with the way feathers, strings, fabric, and fur moved and swayed. While it took a few songs for the energy of the production to build—mostly because the earlier songs are mid-tempo plot builders with less opportunity for singers to flex the vocal strength we get to hear later in the show—the payoff was entirely worth waiting for. Look, I'm just gonna say it, okay? I can't not say it: You better "ease on down the road" to the 5th Avenue Theatre to catch The Wiz before it closes on December 23. (The 5th Avenue Theatre, 1308 Fifth Ave, through Dec 23, $59-$169) MEGAN SELING

Starting December 5, bars and restaurants all over the city are serving signature holiday-inspired cocktails for The Stranger and EverOut's first-ever Holiday Drink Week. You can see the full list of participants here. Need a few recommendations to get you started? How about El Camino’s Santa’s South of the Border Sleigh Ride which is like a banana split that’ll get you drunk? Made with Gustoso rum, orgeat, horchata, lime, and citrus foam, it’s at once almondy, cinnamony, and fruity. Plus I’m a fan of this less-sugary Mexican rum, with cocoa, hazelnut, and banana notes. Pub 70’s Silent Tokyo’s a nod to the Harry and David-inspired holiday tradition of giving gold-gilded pears as gifts—as well as the Japanese Christmas tradition of eating German cakes! This highball starts with Suntory Toki whiskey and adds Amaro Nonino, pear puree, ginger syrup, lemon, and orange blossom water. The mix of the floral/fruit flavors, the honey-vanilla amaro, and the ginger evokes lebkuchen, Germany’s answer to gingerbread. Trade Winds Tavern’s Snuggle Up Cider is real simple—it’s just apple cider and bourbon, but the bourbon is brown butterfat-washed, and it makes all the difference. Not just buttered. Not just browned-buttered. It’s the FAT from the toasty, Maillard-ed butter, and they put it in BOURBON. It’s like drinking a caramel apple. (Various locations Dec 5-11, see the full line-up here) MEG VAN HUYGEN

(MUSIC) It's cold, the skies are dreary, cuffing season is starting to settle in—it's time for us to worship at the altar of Soccer Mommy. The Nashville indie star (real name, Sophie Allison) has made a name for herself writing songs that complexly express what it means to be alive, to love, to reflect on oneself in this twisted and crazy world. At one point, I swear to god, I was composed of bone, nerve, and Allison's "bloodstream," a solemn track off her 2020 album color theory on the transience of childhood. This year, she released the Daniel Lopatin (aka Oneohtrix Point Never)-produced Sometimes, Forever, which finds Allison stepping into different genres, but with lyrics that still plumb the emotional depths of existence. On Tuesday night, she'll be joined on the Moore stage by Canadian outfit TOPS, one of the most delightful cultural exports out of Montreal since poutine. (Moore Theatre, 1932 Second Ave, 8 pm, $29.50, all ages) JAS KEIMIG

Also this week: Patti Smith is at Town Hall Seattle, and we have tickets to give away! It's Prize Fight time, baby! (You don't really have to fight.) 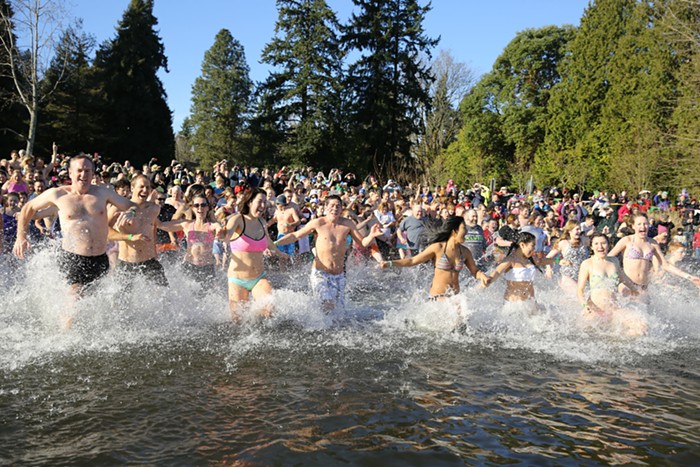 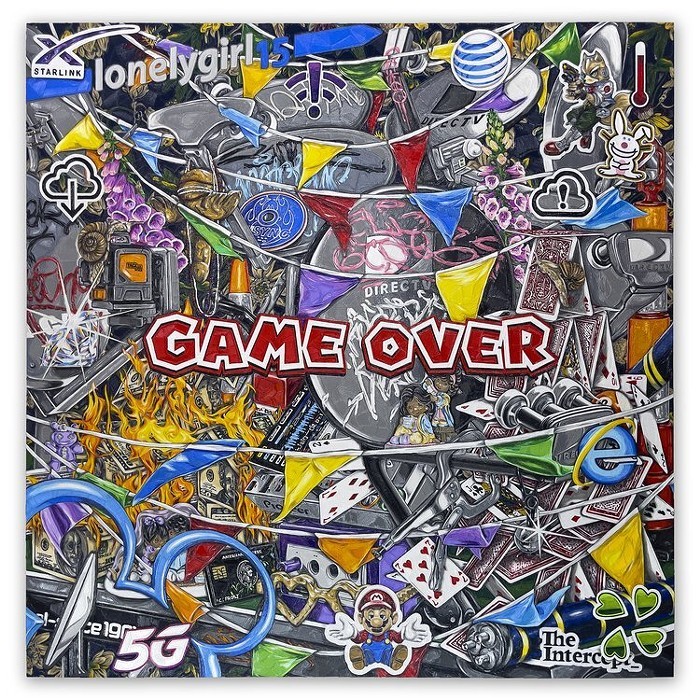 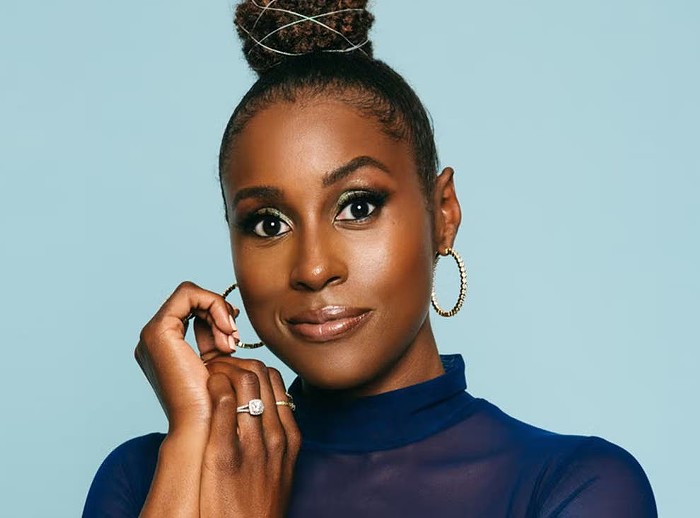