The Stranger's Guide to Live Music and Dancing in Seattle

Where to see great music and get your dance on in the city. 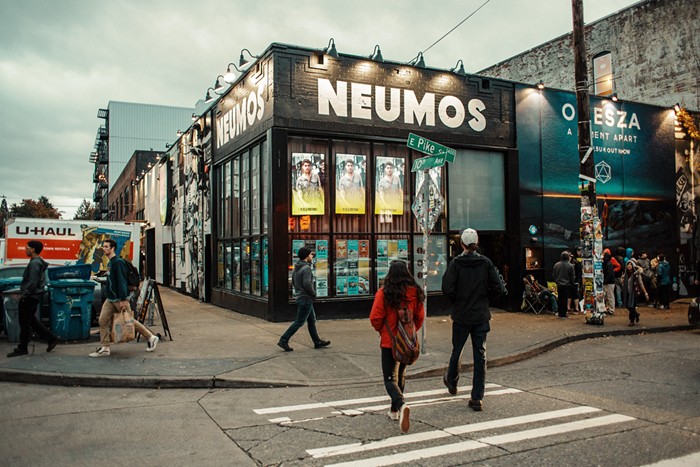 Seattle is renowned for its fruitful and incredibly diverse music scene, which has birthed the likes of Pearl Jam, Jimi Hendrix, Modest Mouse, Brandi Carlile, Macklemore, Odesza, Nirvana, Chastity Belt, and Fleet Foxes, among others. And not only is the scene here exciting and vibrant, but there's an abundance of venues in all shapes and sizes hosting concerts on the reg by both local and national talents, not to mention a range of bars that serve drinks and live music, and numerous clubs where you can dance the night away.

Following an ownership changeover, Chop Suey has gone from oddly-Asian-themed bar and secret live music powerhouse underdog to a still confusingly decorated music venue that now has a side bar and second stage in its "Den." It also has pinball machines, a mostly functioning (as opposed to previously never functioning) photo booth, and a kitchen window from which to buy chicken and other fried delights. What remains the same is its eclectic array of fairly priced live music, from hiphop to metal to singer-songwriter types, almost every night of the week.

The Clock-Out Lounge is a bar-restaurant-club-venue hybrid designed to be a space for supporting the local music scene, particularly within the blue-collar neighborhoods of South Seattle. Their diverse lineup began with bizarre drag act Christeene for their opening, has showcased local bands including Kinski, and also includes weekly comedy and trivia nights.

This beautiful midsize theater located in the heart of Columbia City was originally a vaudeville theater—the oldest in Washington State, having opened in 1917—and is rumored to be one of the first venues to host the Seattle-born Jimi Hendrix. Since reopening in 2010, it has played host to burlesque shows, a variety of local musicians from all backgrounds, and other fun things most nights of the week.

One of Seattle's favorite music venues since the beginning of time (or at least grunge) got a swanky makeover back in 2009, with skylights, a proper mezzanine, dark red walls, and marble countertops in the bathrooms. Their impressive résumé of former gigs includes Nirvana, Pearl Jam, and Macklemore, and their calendar runs the gamut from hiphop to metal and folk.

El Corazón and the Funhouse

Focused on hardcore, punk, screamo, and metal, El Corazón ("The Heart," a reference to the fact that the space has been a live music venue, bar, or club since 1910) has a show nearly every single night. The beloved punk dive Funhouse has also been resurrected (after losing its lease near the Space Needle in 2012) in a second room and features more "intimate" head-banging bills.

Highline is Seattle's preeminent spot to get vegan comfort food and tinnitus. It's the only place where you can consume soy fish tacos, drink cocktails named after the world's heaviest rock groups, and hear some of the world's foremost death metal bands.

The Highway 99 Blues Club, housed in a building built in 1909, offers music Wednesday through Saturday nights, Southern food, and drinks in an awesome juke-joint atmosphere.

This famous joint dispenses dinner service, cocktails, and world-renowned jazz and fusion acts for all who wander there. Hot tip: It's also all ages, all the time (just not in the bar, sorry).

Offering a strange brew of live music, Nectar was built in 2004 and tends toward reggae, hiphop, bluegrass, and EDM in a nicely airy space, including a patio and multiple levels indoors.

Neumos is one of the hubs around which Capitol Hill rotates. Its main show room is invariably packed to capacity as people dance or sway to the latest mega-hyped act to roll through town. Located in the Neumos basement, Barboza is a sweaty, intimate little shoebox-shaped room that hosts a wide range of up-and-coming local and touring talent. If you need a drink break from all the dancing, just walk down the Neumos hall to the Runaway, their bar filled with 1970s classic decor markers and signature drink specials.

Re-bar has something for everyone: booze, theater and arts performances, dancing, rock 'n' roll, drag queens, and a great, rare live-and-let-live atmosphere. If you're experiencing the "Seattle Freeze," head to this eminently friendly, welcoming, weirdo dive.

Now more than 90 years old, the Rendezvous oozes character and history. Its decadent glamour is evident in its restored 1923 Jewelbox Theater, the Red Velvet Lounge, and its downstairs Grotto, thought to be the venue's original speakeasy. The entertainment schedule includes comedy shows, weird music, and burlesque, all of which seems more momentous amid the Rendezvous's comfy confines and fading elegance.

A wood-bedecked space with great acoustics in Columbia City, the Royal Room made its name on jazz bookings (it is partially the brainchild of musician and composer Wayne Horvitz), but has since expanded into folk, world music, and multimedia events.

The Showbox is a great place to see a show, even when it's sold out. There's hardly a bad sight line in the house, it's got two bars, and the room has the classic charm of an old theater.

Dropping in on a quality live music set is easy in central Ballard, with the Sunset and Tractor down the street from each other. The Sunset is a former Chinese restaurant that's now a fun, divey rock-and-roll bar with live music across all popular genres, a photo booth, and friendly bartenders. The Tractor holds court just two blocks away, with gritty saloon-esque decor, tallboys aplenty, and the best selection of live local and national rock, pop, alt-folk, and blues in town.

The Triple Door is the swankiest sit-down live music venue in Seattle—lush darkness and twinkling lights, an antique gold-framed stage with plush red curtains, and great semi-circular booths with table service from the Asian-fusion Wild Ginger restaurant. Upstairs, there's the Musicquarium Lounge, a soothing grotto of a room with a giant fish tank, a great happy hour, and free live music or DJs nightly.

With us since 1934, the Blue Moon is dingy but well-loved, and pretty much everyone is welcome on its bar stools (Richard Hugo and Allen Ginsberg have even been on them). It hosts a wide variety of local talent, from stand-up comedians to live music, almost every night of the week.

Slim's has a great country-time roadhouse vibe. In the summertime, bands play on the bed of an old Ford F-600 in the big backyard while happy people lounge at picnic tables. Regardless of season, though, Americana, punk, and rock groups play the Slim's stage all week long year-round.

Vito's reopened in the fall of 2010 and returned to its old-school 1950s Italiano-style glory, with dark red vinyl booths, a central bar, a grand piano, and lounge-act entertainers including some great jazz (and never a cover charge). Where mobsters and mayors and priests (and doctors getting smashed and gangstas shooting guns) once convened, a cocktail and a plate of pasta wait for you. The ace bar staff, looking dapper, mix a perfect martini.

Inspired by the fake legend of 1920s Seattle bootlegger Roy Aston, the Aston Manor caters to the well-dressed weekend-specific set, with a richly furnished lounge, EDM and trap-heavy dance floor, and Prohibition-era-inspired cocktails.

The Baltic Room hosts top-shelf DJs and occasional live acts with superb sound, an intimate dance floor, and plenty of seating room. The place is swank without being stuffy, and when the dance floor fills up, it feels more like a house party than a nightclub.

For those who embrace the late-night Pioneer Square scene (that is to say, the dense fabric of dance-centric clubs and DJ spots littering the neighborhood with high energy and loud sounds), Contour regularly stays open well past 2 a.m. on Thursdays and Fridays with a frenetic DJs-and-dancing scene.

Foundation has made a quick name for itself as a destination hot spot for Belltown bar-hoppers and luxury condo types alike with a top-notch sound system and an international roster of heavyweight DJs stopping through.

With its high ceilings, mirrored bar, and vintage Cuban decor, Havana is airy and elegant, and they serve mojitos for as long as you want them. Every night has a different DJ, usually a good one, and themes including old school 1990s on Tuesdays and rare and popular soul on Thursdays.

Known for hosting excellent and eclectic live electronic sets, DJ nights, drag competitions, and queer artist showcases, Kremwerk is a futuristic bunker of a club, situated in a blue-tinted basement in the heart of downtown. Just above is Kremwerk's sister venue, Timbre Room, an attached showroom and patio that boasts equally diverse bookings as what's going on down below. Timbre Room really shines in the summer when its patio is used to the full advantage for early evening dance parties in the warm open air.

Monkey Loft is a surprisingly intimate cocktail bar and DJ venue, with an attempted industrial aesthetic and a destination vibe for dance music enthusiasts. Placing them above the competition is their "Deck," an outdoor, after-hours patio with a fireplace, several seating areas, and pretty incredible skyline views.

Q's interior is sort of like where you'd expect the cast of Star Trek: Deep Space Nine to party—a wavy collection of pillars and rounded walls in a cavernous but beautifully lit space with lights and a huge wall for visual projections. They also host world-renowned DJs, local house music talent, and have an all-around solid crew of resident spinners.

This is a massive two-tiered, three-room nightclub that features different music in every room, dim sum, and serious partying (like weekly-beer-pong-tournaments-style partying). Plus, it has a stringent dress code, summed up on its website as "No effort, no entry."

EverOut is The Stranger's new website devoted to things to do in Seattle and across the Pacific Northwest. It has all the same things you're used to seeing from Stranger EverOut Staff, just in a new spot! You'll find nearly every in-person and online event happening in town, plus curated picks and guides. Get in touch with them (and learn how to submit an event) here.
The Stranger depends on your continuing support to provide articles like this one. In return, we pledge our ongoing commitment to truthful, progressive journalism and serving our community. So if you’re able, please consider a small recurring contribution. Thank you—you are appreciated!
CONTRIBUTE NOW