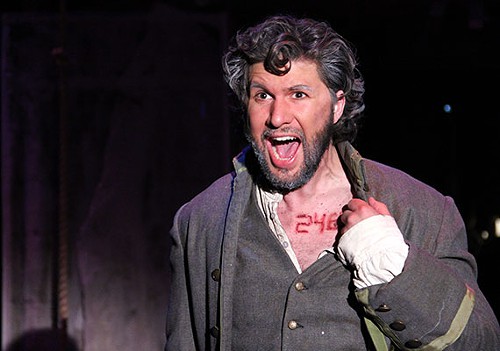 Last weekend, the musical-theater company Balagan announced that it's permanently closing. Founded in 2006, Balagan was known for ambitious productions of old and new musicals and plays, including Hedwig and the Angry Inch starring Jerick Hoffer at the Moore, August: Osage County at Balagan's former home the Erickson Theatre Off Broadway, and a chamber version of Les Miserable starring Louis Hobson, a Broadway actor who moved to Seattle last year to serve as Balagan's artistic director.

Balagan's board voted to shutter the company after its incoming executive director, Danielle Franich, discovered enormous debts that took them all by surprise. “The theater owes more money than it was projected to make by continuing the season,” Balagan’s board said in a statement, “and the board is still working out how to address creditors.”

Franich says she and the board discovered the crushing debts shortly after Hobson and former Balagan executive director Jake Groshong stepped down to start a for-profit venture called Indie Theatricals, Inc., a licensing and investment company for new musicals and plays. Groshong says he doesn't remember how much debt the company had when he left three months ago. "Certainly the bookkeeper and I could've communicated better,” he told me.

Franich and Balagan board president Jim Griffin declined to say how much debt the company is currently carrying, explaining that the extent of the damage is still being assessed.

Groshong says that during his tenure, the board got quarterly financial statements and that "of course" Franich knew about the debts before taking the job.

Board president Griffin counters that Groshong's quarterly reports were "verbal," which “made it difficult to have a complete and accurate assessment of our financial situation… at no point in time during our board meetings either with printed or verbal reports was the board ever aware of the full extent of the debt like we are now."

And Franich disagrees with Groshong about how much she was told about the debts. "I was not fully apprised," she said.

When asked why Griffin and Franich were surprised by the debt he'd left the company holding, Groshong said he’d told them about all the debts "as far as I knew.” So if neither the outgoing executive director nor the board knew about the debt, who was watching the books and reading the balance sheets? "The bookkeeper," he said, "was the only person." The board, Groshong added, had been without a treasurer for approximately nine months before he stepped down.

Groshong says Balagan’s real problems began last year when it lost its dedicated space, the Erickson Theatre Off Broadway, and began working in larger theaters such as the Moore (where it co-produced Hedwig and the Angry Inch) and ACT Theatre (where Balagan booked a 435-seat house for a show called Nirvanov that, according to ACT spokesperson Mark Siano, was canceled “quite late”).

After leaving the Erickson, Groshong said, “Everything became far more expensive.” Renting space, paying union contracts, and a loss of its own rental income from the Erickson all contributed to the company's financial problems. Groshong said he's "shocked and saddened" by the board’s decision to close the theater—Hobson used the same phrase in his statement to the New York Times about the closure—but that he understands they might have been “scared.”

“This board did not have a lot of fundraising experience,” Groshong said. “I tried to set them up for success, but I’m sure that my leaving was another factor that was frightening.”

Franich says Balagan’s creditors include “a variety of people and companies” and Griffin confirms the company is still “investigating” how much it owes in back taxes. Robert Aguilar and Brandon Ivie of Contemporary Classics, a small musical-theater company, say they're still waiting for more than $8,600 from Balagan after their February 2013 co-production of Next to Normal. That $8,600, Ivie said, is a quarter of the theater's operating budget "so for us this is a huge financial hit." Some artists involved with Balagan's production of Hedwig and the Angry Inch late last year also say the company hasn't paid off all its actors. “I don't know of any actors owed money,” Groshong responded. “Maybe there's a theater that we owe money to.”

The board’s decision to close the company was "heartbreaking," board president Griffin said, but should serve as a cautionary tale to other companies. “Too often people are enticed by bigger and better opportunities without a firm structure to support the higher demands,” he said. And lack of transparency, he warned, is dangerous. "Transparency is critical for the continued success of a company," he said. "The best thing you can do as a staff or board member is to be open and honest, and support others when they are transparent, even when the news is painful."

When Balagan Theater introduced itself to the world back in 2006, it kept having to explain its name—a Hebrew word for disorder that co-founder Katie Warren said at the time translated to "happy chaos." Warren left the company not long after it started, putting it in the hands of Groshong, but the chaos seems to have stuck. And it isn't so happy anymore.

Comments 131
Tags: Theater Blogs
The Stranger depends on your continuing support to provide articles like this one. In return, we pledge our ongoing commitment to truthful, progressive journalism and serving our community. So if you’re able, please consider a small recurring contribution. Thank you—you are appreciated!
CONTRIBUTE NOW