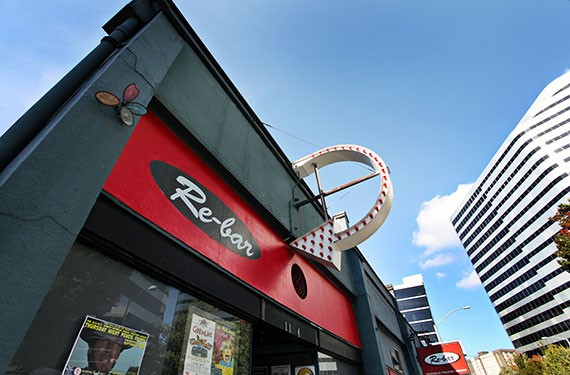 Not pictured: Kurt Cobain, Krist Novoselic, and Dave Grohl puking on the sidewalk.

This provides us with a perfect opportunity to stroll down Re-bar Memory Lane, with the type of cherished-memory-collection that's all too often inspired by a venue's demise. Thankfully, Re-bar is alive and kicking.

I'll go first! My history with Re-bar is extensive: In the 1990s, Re-bar produced three of my solo plays (Letter to Axl, Exploring Whoring, and Straight), but before that, it was my first favorite place in Seattle. I arrived here in the summer of 1991, when Re-bar's Thursday night Queer Disco with MC Queen Lucky brought weekly lines around the block and an insanely infectious party inside. I was still a semi-closeted gay hatchling, and Re-bar was the first place another dude asked me to dance. It was also the first place I encountered queer culture—from the bar's early promotional stickers placing Ernie Bushmiller's Sluggo and Nancy in same-sex pairs to Greek Active's queer recontextualizations of Shakespeare—that spoke directly to me. The place was ridiculously fertile with creativity. Early on, I remember being handed a flyer by the sweet, shy guy who worked the bar, advertising his own upcoming drag show. This guy had never given off a single whiff of being interested in drag, or of being a performer, and I attended the show braced for perhaps the drag equivalent of my cousin playing a song he wrote on guitar. Instead, I had my mind blown by one of the earliest shows by Dina Martina. The place remains full of brilliant surprises. I am forever in its debt.

If I can remember it, I went to Re-bar the second week it opened. I had been to the spot when it was the Axel Rock and S and enjoyed those incarnations, but when I got to Re-bar, I remember thinking, "I'm not a DJ, but if I were, THIS is where I would want to do it." Mind you, I really wasn't a DJ and I didn't think I wanted to be one. It was NOT my aspiration. I was content to manage a record store, content in the present with no thought of the future. Until one day, Paula Sjunneson aka The Swedish Housewife came in the store and said, "I'm doing this new night at a new club called Re-bar. It's on Sunday and I'm looking for a DJ. I've been doing the acid house night at the Vogue, but I'm sick of it. I want to do a night where we play black music—hiphop, R&B, funk, that type of thing. And I'd like you to be the DJ."

I did... for the next 20 YEARS. Re-bar has been my home and inspiration, my classroom and study, my experiment, my church. Some of my best friends in life come from there. Re-bar gave my name a name, my face a face. And even after all these years, one of my favorite achievements is to be a member of this family.

There was a guy who used to be at Re-bar every Thursday for disco night. No one was offered the job of go-go, but this guy thought it was his job, no, his god-given right, to get up on the speakers, take off most of his clothes, and shake his scrawny body and stringy hair in time to the music. Every week. He was amazing. MC Queen Lucky, the genius behind disco night, is still at the top of my all-time favorite Seattle DJs.

There was a group of friends I went out with every Friday night to hear funk, acid jazz, and soul. I would get heavily stoned and groove all night to Riz and company. This was more than 20 years ago. I'm still friends with all of these people today.

Five years into the bar's existence, I walked up to one of my drag queen acquaintances (Ginger Vitus) to say hi. He immediately introduced me to a guy who said he liked my lips. We wound up making out in the bathroom. I am still with that random hookup to this day.

I used to go see theater produced by that guy in Re-bar: Macbeth, King John, Saint Joan. I hated live theater and didn't like actors much either, so I never talked to anyone. For some reason, a rumor went around Greek Active that I was French. Dan Savage's French boyfriend. The first time someone actually heard me speak, they gasped. I'm still ignoring actors. Dan is still doing theater when he can.

At Re-bar, if your shows were successful, they could run much longer than at any other fringe or Equity theater in town. The first two shows I did there in 1993 both ran for nine weeks each. I was in the second play done at Re-bar (The Importance of Being Earnest), and even though many actors in town made fun of me for doing a play in a bar with a bunch of drag queens, within a year, everyone wanted to perform at Re-bar, and I haven't had to audition for any show I've been in since.

Best Re-bar memory: meeting a guy on the dance floor at about 11 p.m. one Sunday and making out with him as we "danced" until closing (then I took him home). Worst Re-bar memory: Dan Savage drunkenly screaming the entire score to The Pajama Game in my one good ear on a Thursday night (he'd had half a beer).

I spent a year of my life in the building playing Yitzhak in Hedwig and the Angry Inch in 2000 with Nick Garrison. We were the first regional production of the show, and no one really knew the play. We would change in the poolroom, and I would put my beard on every night on my tiptoes in a small mirror above Steve's desk. During one of our last shows, I was at the closing moment on my knees, and I took a deep breath to sing my last note and swallowed my wool soul patch—it got stuck in my throat. I ran through the poolroom and the office into the handicap-accessible bathroom, stuck my finger down my throat, threw up the hair ball, then ran back on stage and finished the song. Performing at Re-bar always allowed for disasters to become a part of the show.


Perhaps the most enduring Re-bar story involves Sub Pop and Nirvana, who threw their Nevermind release party at the bar in 1991. Former Re-bar owner Steve Wells "remembers like it was last night."

Something most people today can't even imagine about the Washington State Liquor Control Board in the late 1980s and early '90s: Getting a license to sell beer and wine, let alone "spirits," was a very difficult process. Maintaining that license could be even more difficult. Especially downtown. New clubs, especially gay clubs or any clubs that played "black" music, were under the microscope.

In 1991, Re-bar became very popular, and naturally then attracted unwarranted attention from the WSLCB agents. On busy nights, and sometimes just around 1:30 a.m., even on slow nights, they would often park their cars across the street, watching the front door, and would make sweeps through the bar, checking IDs, usually in a very confrontational manner.

In the meantime, Seattle bands were really taking off, and it was a point of honor for Sub Pop to have Nirvana's record-release party for Nevermind at Re-bar.

Sub Pop did a great job of promoting the party, and bought a couple of kegs of beer. Bruce Pavitt, co-owner of Sub Pop, was on the decks, spinning disco, funk, etc. Everything went great for about two hours, but then I noticed that Kurt, Krist, Dave, and others kept going up into the DJ booth, and they were obviously getting drunker and drunker... way more than they could on beer.

Then the free beer ran out, and things started to get kinda rowdy. Then we noticed the WSLCB's cars had pulled up into the parking lot across the street, headlights on, pointed at the front door.

I got scared, climbed up into the DJ booth, and found Bruce and his buddies chugging on a half gallon of, I think, Jack Daniel's—the large size bottle that is known as a "handle," 'cause it has one. Empty bottles littered the floor. Frankly, I would have liked to join in, but all this activity forced me to become an uptight queen.

Suddenly, Kurt, Krist, and maybe Dave started a food fight. I guess I freaked about the whole situation, rounded them up, including Bruce, and with the help of the doormen, got them out of the door just in time for them all to barf on the curb. Soon after, the WSLCB guys approached with their flashlights and I then declared the party was "OVER," turned up the lights, and told everyone to leave, making me out to be a total asshole with the crowd. Oh, well.

That's how I remember it. And to this day, I love them all.

Comments 7
Tags: Theater
The Stranger depends on your continuing support to provide articles like this one. In return, we pledge our ongoing commitment to truthful, progressive journalism and serving our community. So if you’re able, please consider a small recurring contribution. Thank you—you are appreciated!
CONTRIBUTE NOW