Isabella Rossellini Is Bringing a Really Cool Dog to Seattle 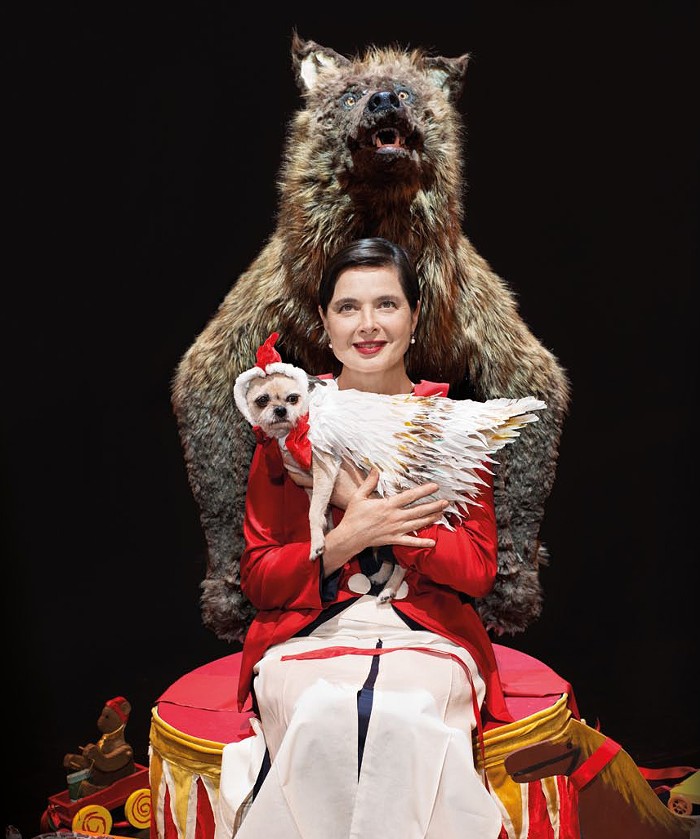 That cute trained dog plays a chicken, a sheep, and a bee. Brigitte Lacombe

Isabella Rossellini has become something of a surrealist Jane Goodall.

Rossellini has always lived a unique life—but in the last decade, the 66-year-old actress and model has taken perhaps her most peculiar turn: She's become one of the world's foremost lecturers on animal fucking.

In one notable video, she penetrates a giant cardboard praying mantis, fucking it from behind until it bites off her head. The episode climaxes with a headless Rossellini yelling, "SEEEEEX!"

"We did about 40 [episodes], but it's very difficult to monetize the internet," Rossellini said. "Now it can be monetized, but ten years ago it was difficult."

Rossellini, of course, is the stuff of legends; she is the child of two of cinema's most famous figures, Ingrid Bergman and Roberto Rossellini. As an actor, she's known for her roles in Blue Velvet and Death Becomes Her. She counts Martin Scorsese and David Lynch among her many famous ex-partners. And she was the face of Lancôme for more than a decade.

But after being fired from the cosmetics company for being "too old" at the age of 42, Rossellini turned to intensely studying one of her life's greatest passions: animals. (It should be noted that in 2016, Lancôme's new female CEO, Francoise Lehmann, rehired Rossellini to be the company's global brand ambassador.)

Earlier this year, Rossellini received her master's degree in animal behavior and conservation from Hunter College. She was inspired to pursue her degree after hearing Temple Grandin, an American professor of animal science, give a lecture at the college.

"I went to a lecture by a wonderful, interesting lady called Temple Grandin. Claire Danes made a film about her for HBO," said Rossellini. "They were handing out leaflets [at the lecture] that said, 'We just opened a new department: Animal Behavior and Conservation.' And I couldn't believe it because that was the subject I wanted to study all my life. So I signed up that evening."

But her new show, Link Link Circus, coming to the Triple Door for two performances on January 14, is from the "waist up, about animal intelligence."

"At the beginning [of rehearsing Link Link Circus], I tried to train my dog but I didn't succeed," Rossellini said. "My dog reacted to the audience. The audience would say, 'Oh what a pretty dog.' It would leap out of the stage and went to say hello to everybody."

So Rossellini and her creative team called acclaimed Broadway dog trainer Bill Berloni, who frequently trains dogs for productions of Annie and Wizard of Oz. "I explained to Bill what I wanted, and he only works with rescue dogs, so he identified for me this little dog, Peter Pan, who was taken from a pound in North Carolina."

"Bill trained her for about six months. And now she lives with me."

In Link Link Circus, Rossellini and Peter Pan, along with Pan's handler, who works as both puppeteer and dog handler, explore the animal kingdom and the links between species. It's a brainy and adorable circus, but with Rossellini as its ringmaster, it manages to avoid being cloying.

"This [show] asks the basic question: Are animals able to think and feel? This is a lot of what I studied for my master's degree," Rossellini explained. "But I hope it's funny. Above all as an entertainer, I hope I made a show that is entertaining and funny."

Watching Rossellini perform her uncanny monologues live is a once-in-a-lifetime event, but seeing her alongside a fantastic costumed show dog is a true spectacle. Go, and you'll fall in love with our world, the animal world.