The Winner of This Live Drag Competition at R Place Gets $5,000

It's called So You Think You Can Drag, and your vote counts. 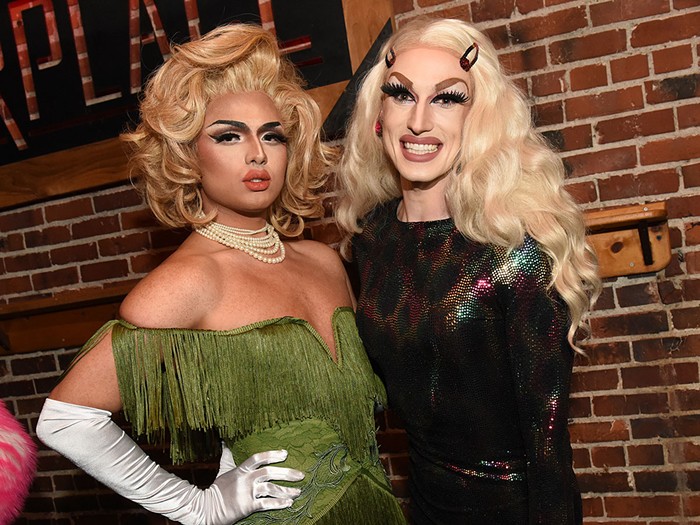 This has been the decade of drag. When RuPaul's Drag Race premiered in 2009, Barack Obama didn't even support gay marriage. Things have obviously changed. The success of RuPaul's Drag Race has unexpectedly spawned a massive revival of drag in gay clubs across the country—including Seattle.

Now there are drag nights at Seattle taco stands and pizza parlors. And some venues, like R Place and Queer Bar, have upped the ante by offering queens big cash prizes in Drag Race–style live competitions. The ongoing competition on Wednesday nights at R Place, So You Think You Can Drag, is about to award $5,000 to the winner of its second "season." It's one of the biggest cash prizes a queen in Seattle can hope to get.

"It's been a no-brainer success from the beginning," said Seattle drag queen Cookie Couture, who hosts the competition. The shows have been packed and rowdy: "We've been at club capacity every week this season." Tipsy guests chuck crumpled tips at performers, sometimes in the form of $20 bills, while pushed against the venue's back walls.

"The show format appeals to people who are maybe really into Drag Race but haven't really dived into the local scene, and it appeals to the folks who support the locals on the regular. Plus, you wave $5K around, and people really try to make their performances stand out as something special," said Couture.

So You Think You Can Drag has a pretty standard drag-competition format: Each week opens with a runway where contestants have to strut in a look created for a theme they are told about a few days in advance. Then each queen performs a lip-sync. Then audience members vote for their favorites. Eventually, one queen per week gets sent home. It can get emotional, which is part of the fun.

"Emotions have definitely run higher this season," said Couture. "But I also think there's a lot of friendship and sisterhood happening backstage."

This season, there's a whole new crop of queens. "We've got people who've been doing drag for six-plus years and some who have done drag for only a few months," said Couture. "I love that it's an even playing field in that way. I don't play favorites, but there are a few underdogs in the competition that have been slaying completely out of nowhere."

Kung Pow Meow has been a standout, memorably wearing a dress that looked like a Chihuly glass sculpture (colorful tentacles extending in every direction) for the week when the look had to be inspired by each queen's hometown. (Like Dale Chihuly, Kung Pow Meow is from Tacoma.) Miss Texas 1988, another favorite, has been earning fans with her clever, trashy drag. For a "red carpet" runway theme, she came out naked, except for a red merkin (that's a fancy word for a pubic wig) over her crotch.

So You Think You Can Drag will have its finale on June 26, during Pride week. When I asked if the competition has gotten wild this year, Cookie Couture laughed. "Does it get wild? Have you ever dangled $5K in front of 10 drag queens before?!"