Who Is Betty Wetter and How Did She Get That Way?

Betty Wetter hosts a variety show, a trivia night, a bingo, and like a hundred other things I don't have room to list. 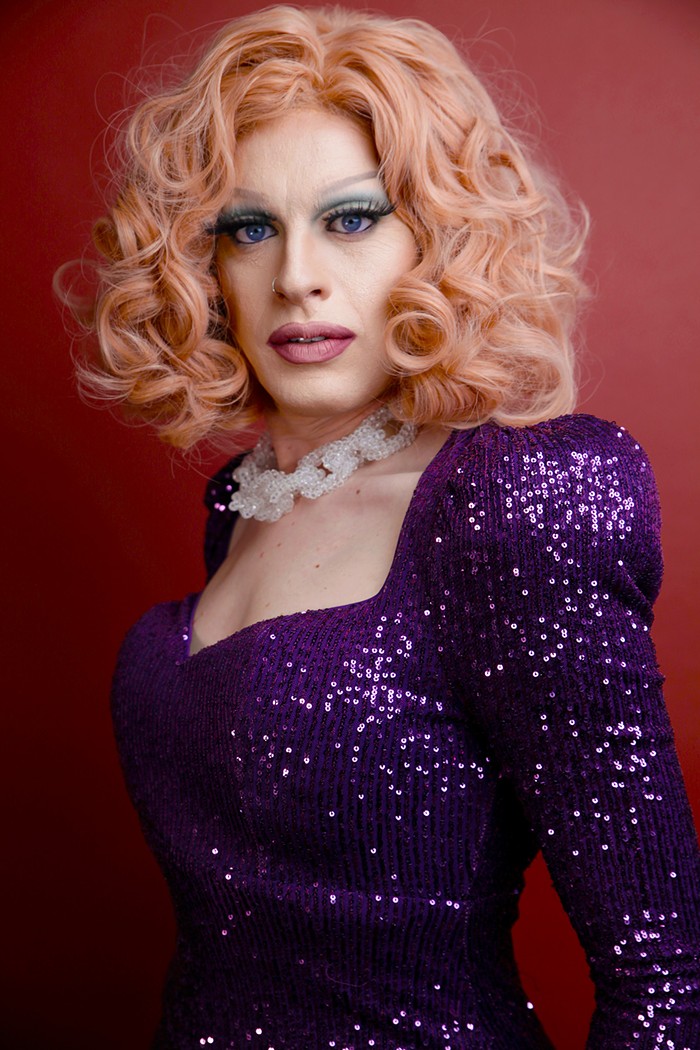 Betty Wetter seems like she has always existed. She's an old soul, a neighborhood character, a vision of glamour in a vintage dress.

Despite appearances, she's not immortal, she doesn't exist everywhere at once, and she hasn't been here long. She's the creation of a 32-year-old from North Carolina named Scotty Cayton, who moved to Seattle in his late 20s and only started doing drag five years ago.

The name Betty Wetter is a joking reference to the fact that Cayton wet the bed until he was 17 years old. "I wet the bed for so long that I was taking sheets off my bed and putting them in the trunk of my car so that my mom wouldn't know," Cayton says. "I would go get new sheets at Kmart. It was so embarrassing."

He grew up on a tobacco farm in the middle of nowhere, fascinated by the fashion photos he saw in Harper's Bazaar and other grocery-store magazines. "There weren't a lot of resources at the grocery store—but once I got to high school, I went to Barnes & Noble and picked up magazines like W. I would sit and look through them. And without knowing what cruising was yet, I would cruise in the Barnes & Noble and try to flirt with guys."

Back home, everyone told him not to be a sissy—so moving to Seattle was a culture shock. He got a job as a barista and tried to adjust to his new reality. The first time he ever wore drag in public was to a show at Kremwerk. He wore a pioneer-woman dress, a white wig, and a fascinator that he'd made out of a coiled up toy snake to which he added giant fly wings.

Not long ago, Scotty gave up the coffee gig, and now Betty is his full-time job. She hosts the trivia night Betty's Body of Knowledge at Solo Bar in Lower Queen Anne every Sunday. She hosts Name That Tune at Skål Beer Hall in Ballard on second Thursdays. She hosts bingo every other Tuesday at the bar Montana (on alternating weeks, her drag sister Cookie Couture hosts), and Heels at the Cha Cha on first and third Wednesdays. And she hosts the drag variety show Tush at the Clock-Out Lounge on Beacon Hill the last Thursday of the month.

Tush is my favorite of these, and not just because the Clock-Out Lounge has that fabulous gold curtain, and not just because they serve deep-dish, focaccia pizza. Tush features four drag queens performing new numbers every time—the cast also includes Miss Texas 1988, Angel Baby Kill Kill Kill, and Beau Degas—and you never know what you're going to get. Plus resident DJ Arson Nicki, plus special guests. "It's my most successful event," Betty acknowledges. "And it's my best event, to be honest."

What makes her such a good host? "I'm good at making people feel welcome. I'm good at keeping things organized. I'm just a strong host. I don't even understand it. I just turn off and go into that mode."

Name That Tune with Betty Wetter

Name That Tune with Betty Wetter

Burlesque Is Back with an All-BIPOC Festival This Month

Revry's new documentary series Submission Possible pulls back the curtain on kink and burlesque in Seattle.

Our Top Eight Recommendations in Seattle This Week