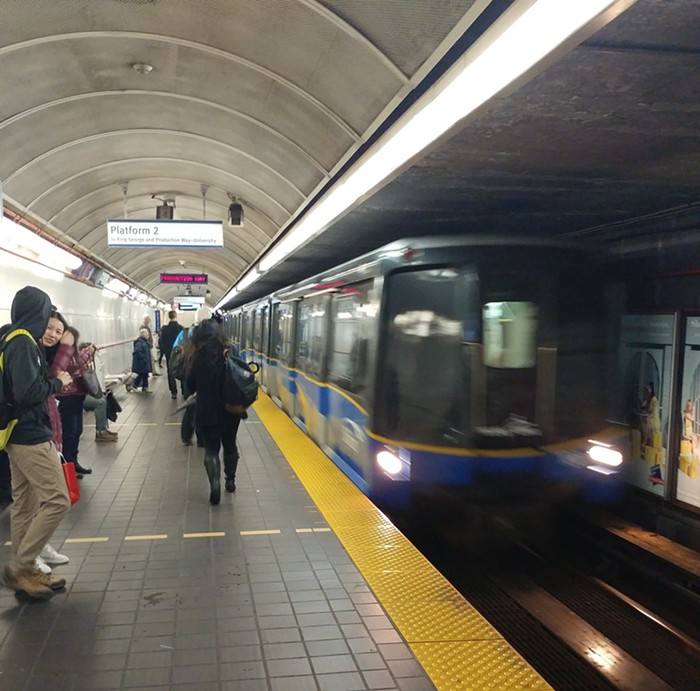 SkyTrain Charles Mudede
Everyone who cares about the expansion of public transportation in Seattle, and the directions and forms that this expansion can take, must read David Gutman's Seattle Times story, "Is this the future of Seattle transit? A look at Vancouver, B.C.—a city that figured it out years ago." Though it's mainly concerned with the mini-cities sprouting around SkyTrain's suburban stops, and how this has helped reduce congestion and improve mobility in Vancouver, and Seattle might learn from its land-use planning, the piece also points out the key feature that makes SkyTrain far better than our Link light rail: the world-class frequency of its trains.

During peak hours, trains come every 100 seconds. During off-peak hours they come every three minutes. Even at the ends of the Canada and Expo lines, when the track branches in two to reach more suburban communities, a train is never more than six minutes away.

Seattle’s light-rail trains come every six minutes during rush hour, and every 10 to 15 minutes otherwise. They can’t touch SkyTrain.

The people who run SkyTrain mean business. Those who run Sound Transit do not. Even between 9 a.m. and 9:30 a.m. in the morning (a very busy period), Link often has gaps that are between 15 and 20 minutes long because a number of its trains are deactivated and returning to the train yard. (As to why these particular trains have to be empty between the Angle Lake Station and Beacon Hill Station is a mystery I hope to solve one day.) But, my point is, trains are not retired after 10 a.m., but at 9 a.m.. You will never win souls with that kind of tepid commitment. Also, one has the general sense that Sound Transit was not at all prepared for the city-changing success of the Link when its stations on Capitol Hill and University of Washington opened in March 2016.

While comparing the developments around Link stations with those around SkyTrain's, Gutman points out the Rainier Beach Station has few businesses, lots of unused land and single-family homes, and no major developments in the works. Why? Because many of the low-income residents in this neighborhood are "at a greater risk of gentrification and displacement." This state of things touches upon an important fact about the developments in Vancouver. They might be improving density, but they are not making urban living affordable. The same will (and is) happening in Seattle (see the rail-related developments in Columbia City). An economy that has no to little non-commodified options for housing, and permits the market to direct the bulk of developments, will automatically transform the virtues of increased density, de-congestion, and walkablity into values that, along with speculation, push housing prices upward.

This is the logic of the free market. There is no way around it. There is no high-rate of construction that can overtake it and finally arrive at the paradise of affordability.

During a recent discussion on KUOW’s Week in Review, I argued that the parking reform that would reduce the parking minimum for housing developments and basically attempt to make drivers pay for parking, rather than everyone, including pedestrians—read Donald Shoup on this issue—would, at the end of the day, make housing more expensive, not cheaper. The logic in my argument is simple. Basically, cars do not dominate our busy streets because they are efficient or even obviously desirable. They do so because a great deal of political power and social engineering have forced them onto our streets. Remove this pressure and engineering (car ads and so on), and they will be exposed as having an impact that's far more negative than positive.

Once the positive side of what Danish architect Jan Gehl described as the human-scale urbanism is exposed, it will not appear in a vacuum, but in a city that has the dictates of the market at its core. The physical and mental health benefits of cleaner air and walking will, like density, become marketable "amenities." And this will only have the effect of increasing the value of this form of urban life style. Rents and housing prices will only go up and up. To get my meaning, you only have to see what happened to the value of apartments/condos near Manhattan's High Line, a project designed with the best publicly minded intentions.
Curbed:

It’s not news that the arrival of the High Line has spurred a real estate boom around the park, not to mention ever-rising prices. But StreetEasy crunched the numbers to examine the park's so-called "halo effect," meaning how much the success of the elevated park gas affected prices in the surrounding area. It’s part of a series examining different development and rezoning sites around the city and their impact on the surrounding real estate market.

In the area around the first section of the High Line, which opened in 2009, the median resale price ($2,143,287) is more than 100 percent pricier than the real estate value in the "comparison area" one block to the east, between Ninth and Seventh Avenues. It's also 75 percent higher than the rest of Downtown Manhattan.
If you want to make housing cheaper, there is no solution that can beat de-commodifing huge sections of this sector.