The Stranger's Guide for First Time Pot Buyers in Seattle

Don't be intimidated: Buying pot in Seattle is safe, easy, and totally legal 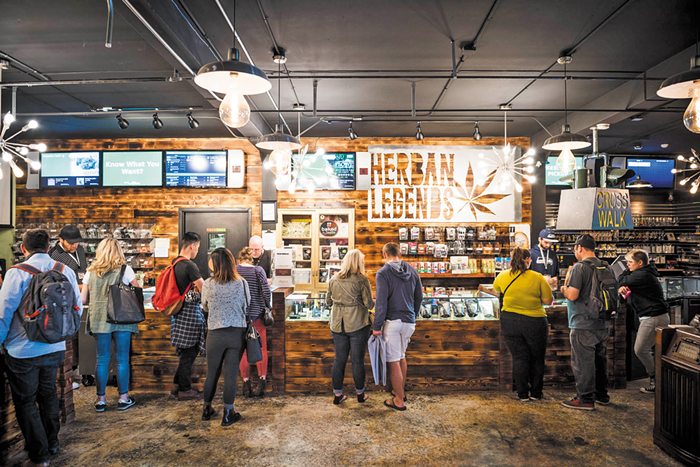 Hey there, intrepid traveler! Welcome to one of the best places to smoke pot in the world. Not only is our weed amazing, it's also legal—and there's no shortage of beautiful mountains, amazing food, interesting art, and quality music to combine your pot experience with. So let me help you find the right pot for your next trip to Pike Place Market or a night out on Capitol Hill.

Walking into a legal weed shop for the first time can be an intimidating experience for a lot of people. After decades of pot being criminalized, it's natural for people to be a bit nervous when they belly up to the bud counter. Even for me, a pot writer who has visited legal pot shops hundreds of times in multiple states, it still feels surreal every time I buy weed. I have to pinch myself and ask, "Is this really legal?!"

Yes, it is legal! Under Washington State law, anyone 21 and older can legally purchase weed from a licensed store. Pot is still, however, completely illegal in the federal government's eyes, so a DEA agent or federal marshal can still arrest anyone purchasing or consuming cannabis. While there are a lot of questions about how the Trump administration will enforce federal pot laws, it is extremely unlikely that the hammer will come down on individual users like you and me.

So let's go pot shopping! Just like when you go to a bar, you should have your ID ready before walking into a pot store. This is just to verify that you are of legal age; it is not used to track your purchases or anything like that. After you prove that you are at least 21, you'll be introduced to your budtender and your personalized weed-shopping experience begins. This is where things can get confusing. In our state, weed is not a singular thing—there are dozens of different types of products infused with weed and thousands of different varieties of pot plants. A good budtender will kindly walk you through the specifics of different products and different brands, but here's a little guide to what you can find.

What to Get: Flower, Edibles, or Concentrates?

Let's start with the simplest product—flower. This is the green nugget of awesomeness that you can grind up, put into a glass pipe, smoke, and voilà—you're stoned! We call these sticky little nuggets "flower" because they are literally the flowers of the cannabis plant. This is why you'll often hear Seattleites say cannabis instead of marijuana—cannabis is the scientific name for the plant, while the word marijuana has an ugly history of being coopted from Latin American Spanish by the American government as a way of racially stigmatizing and criminalizing pot.

There are two subspecies of the cannabis plant: indica and sativa. The types of high produced by each subspecies is considered by some people to be different, so most pot shops divide their flower selections into three categories—indica, sativa, or a hybrid of the two. Indica is said to be more of a relaxing body high, and sativa is thought of as a more energetic mental high. Don't think of these as hard rules, though—there's lots of evidence that every modern pot plant is a hybrid of indica and sativa, and predicting what kind of specific high you will get is a questionable exercise.

Cannabis flowers are filled with a group of chemicals called cannabinoids that make humans high. The cannabis plant naturally produces these chemicals, as do our own bodies, although the specifics of how and why these chemicals make us high is a matter of debate among scientists. The most powerful of these cannabinoids is tetrahydrocannabinol, usually shortened to THC. While THC is not the only cannabinoid that gets you high, it is the strongest, so we can use THC as a good barometer of how strong a cannabis product is. The legal weed you'll find in Washington is considerably stronger than the reefer of the 1960s and '70s. Back then, a cannabis flower was rarely more than 10 percent THC by weight. Walk into one of Seattle's pot shops today, and you'll find hundreds of strains with more than 20 percent THC, with some even testing over the 30 percent mark.

But don't just shop for the highest THC possible—some of my favorite strains test around 15 percent THC. Pot's terpenes, the plant’s aromatic essential oils, are equally as important as THC. Look for products that list specific terpene percentages, those companies are taking the extra time to focus on flavor and are likely producing tasty products.

If you don't have a pipe to put your flower in or the will to roll your own joint, you can skip a step by buying the weed tourist's best friend: a pre-rolled joint. These are already perfectly rolled and sold in singles or in cute little joint packs. Because it’s easy to conceal inferior weed in a sealed joint, it’s worth spending a few more dollars for a higher quality pre-roll. Watch out for infused joints—these can be great, but they are just as likely to be the shittiest weed that has been covered up with an extra dose of cannabis oil.

You can also avoid smoking and opt for one of the many products infused with weed. Whether you're eating weed chocolates or bud-laced peanuts, drinking pop or coffee with pot in it, the label will indicate how many milligrams of THC are in each serving. This is a crucial piece of information. Unlike smoking weed—which will affect you almost immediately—it takes about 30 minutes to an hour before you get high from eating weed. That means an impatient edible consumer can get way too high by eating too much before seeing the effects. It's impossible to overdose on THC, but that doesn't mean you can't hurt yourself by getting too high and then freaking out.

I recommend starting with 5 or 10 milligrams of THC, and then waiting a full hour to see how it affects you. You can always eat more weed if you're not feeling high enough, but there's nothing but time to reverse the feeling of being way too high.

Speaking of being way too high, there’s a third class of products at our bud stores called concentrates. They go by dozens of different annoyingly similar names, but they are all essentially types of hash—a substance full of pot’s active chemicals without much plant matter. These concentrates can test at more than 90 percent THC and can be spread on top of a bowl of flower, rolled into a joint, cued up in a vape pen, or vaporized in a special type of water pipe called a dab rig.

The easiest way to consume concentrates is via a vape cartridge that is screwed into an electronic battery, similar to an e-cigarette. These cartridges are pre-filled so there’s no fussing with any loose flower or oil, just attach the cartridge and inhale, which makes vaping an easy option if you don’t want to deal with the rigmarole of a lighter and a joint.

Dabs, on the other hand, are probably the most involved way to get high and include a blowtorch and a special type of bong. But when employed correctly, the flavor is worth your trouble. If you really love pot, I’d recommend finding a way to dab a top-shelf concentrate—it’s an amazing experience.

If you are still unsure about what you want to buy, feel free to ask your budtender any and all questions you have about the products they are selling. We've left the days of pot prohibition behind—when you would need to set up awkward interactions with a drug dealer and feel pressured into buying something. So if for some reason you don't feel like buying the products a pot shop is selling, simply say "thank you" and leave empty-handed.

Now that you have your bud, it's time to smoke—but here's where it can get a little bit inconvenient for visitors. You can smoke weed only on private property in Washington, so you can't legally light up while you're walking down the street. If you're staying in a hotel's designated smoking room, you can legally smoke weed if the hotel permits it. Inquire with your accommodation before you light up, though; some hotels have strangely draconian policies regarding smoking weed. State law also forbids any Amsterdam-style weed cafes, which is a real bummer.

That being said, you can still reasonably get away with discreetly smoking weed in public in Seattle. A cop isn't likely to waste their time with you if you're being unobtrusive and smoking away from any big crowds. And if a cop does decide to investigate a stinky smell, they are directed by city law to avoid writing a ticket if possible. They'll likely just ask you to put it out and move on. If you do get a ticket, you don't have to worry about going to jail. Seattle law treats smoking weed in public the same as drinking alcohol in public: a $27 ticket.

Driving while stoned is not treated as lightly as public consumption. If a cop thinks you are stoned while driving, they can arrest you and give you a blood test. If you test over the absurdly small level of 5 nanograms of THC per milliliter of blood, you will be convicted of a DUI—no fun.

Where to Get Legal Pot

HAVE A HEART BELLTOWN

HAVE A HEART GREENWOOD

A doctor, a pot grower, a cannabis extractor, a weed shop, a policy advisor to the governor, and a stoner film festival talk about this very weird moment in time.