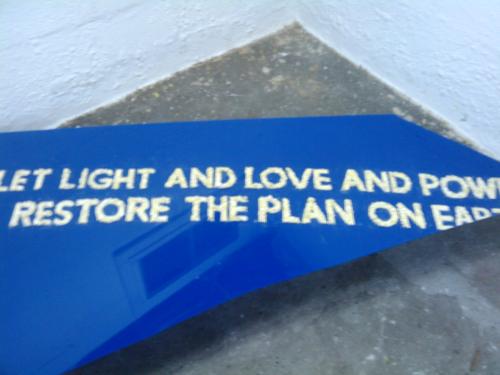 In fact, I have it on good authority that I was the only visitor at TARL yesterday—because TARL is a DIY art-collective currently exhibiting (by appointment) an installation, called Locrian Invocation, out of the basement of their shared house in the Central District.

Upon my arrival, I can’t help but admit, I felt a little shy. I walked up to the small, red house on residential 21st Avenue and noticed several young people inside looking cool through a picture window. I swallowed my breath, knocked on the door, and was greeted by a chipper Matt Browning. As he gave introductions, fellow TARL founder Rebar Niemi handed me a beer.

While heading down to the basement art space, the members of TARL, including Jessica Powers, pointed out the sizable (in city measurements) yard, and they quickly acknowledged the small piles of beer cans due to a recent art party. Pretty soon you get the impression that TARL is about feeling good and talking about art, possibly in the company of a fire pit and keg.

Locrian Invocation was at first, to me, intractable; or as the guys at TARL called it, “A really good trick, if it was a trick, but it’s not a trick.”

Football-sized chunks of sulphur interact with marine-blue Plexiglas in Rob Smith’s installation, which is named after the 1975 album by New Age harpist and “light-healer” Joel Andrews.

An etching of Andrews’ visage mimicking the album cover is the central focus of the installation, though it takes me a few moments to discern in the semi-harsh fluorescent lighting of the white-walled basement. To its left, sulphur rock is suspended in Plexiglas with ropes to create the tension required for a makeshift harp.

After TARL’s proprietors explain Smith’s motivation for the piece, I inquire about listening to the album, and am informed that Smith took it back with him to Eugene, which is kind of a bummer. Instead, I am taken back upstairs to listen to a small clip of Andrews’ ambient harp stylings on YouTube, so I guess that will have to do.

As the event to be at last night, I can’t approve this Suggests, as I was basically intruding upon someone’s home with little warning. But, as something to keep on the radar, I imagine future events at TARL will offer good times and interesting conversation.

Comments 1
Tags: Visual Art Blogs
The Stranger depends on your continuing support to provide articles like this one. In return, we pledge our ongoing commitment to truthful, progressive journalism and serving our community. So if you’re able, please consider a small recurring contribution. Thank you—you are appreciated!
CONTRIBUTE NOW