The Amazing, Original Green Building Is Soon to Be Vacated by the Original Timber Company

It's already been reported that the Weyerhaeuser company is moving to Pioneer Square in 2016, which means it's selling its legendary five-story HQ in Federal Way—certainly the best building you're going to see on the I-5 corridor between Tacoma and Seattle. That's selling it short, though. Draped at every level in English ivy, the building that's been described as a skyscraper on its side also manages to look like it's a natural outgrowth of the earth. Its foundation cleverly serves as a dam for a 10-acre, human-made lake in front of it.

Plenty of love has already been heaped on this tremendous, tucked-away gem of architecture by Skidmore, Owings & Merrill—the same crew that created the Sears Towers and other icons—but I'd like to take another moment with it as a cultural artifact, after reading an arcane document about its engineering in the February 15, 1973 issue of Electric Heat magazine (PDF).

Electric Heat describes the building's features at great length. The light fixtures also secretly functioned as heating and cooling units. Views inside the building spanned from one end of the building all the way to the other. There were no full-height interior walls, but instead "about 500 sound-absorbing screens faced with Irish mohair and wool." Modernist fantasia!

And there were fake building sounds: The all-electric building "is so quiet," according to the report, that "it was found advisable to intentionally raise the noise level for privacy in conversation by piping in noise which simulates the sound of an HVAC system over speakers." 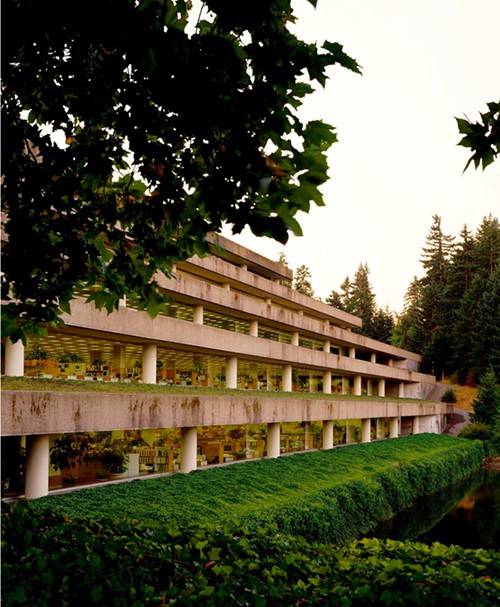 Puget Sound Energy & Light was actually the force that convinced Weyerhaeuser and SOM to go through with the newfangled, all-electrical scheme. There wasn't much cost savings on the front end, according to Electric Heat, but over time the bills were proving to be lower. Shifting politics must have played a role, too—though that's not mentioned in the trade magazine.

By the 1970s, average Americans were starting to notice and fret about where their oil came from. Before too long, with the rise of the environmental movement and its intersections with global problems such as conflict in the Middle East, companies like Weyerhaeuser would have all kinds of PR problems of its own. By 1990, the Seattle Times reported, Weyerhaeuser was placing ads in newspapers and magazines to try to convince people it wasn't evil. Fara Warner wrote, "The newspaper ads begin with slogans such as this: 'We aren't running out of trees. Not here. Not now. Not ever.'"

As of 2013, according to Weyerhaeuser's annual report, the company is one of the world's largest private owners of timberlands, a wood and cellulose fiber manufacturer, and a major real-estate developer, employing 13,700 people. Net sales in 2013 were listed as $8.5 billion.

I called the UW Center for Integrated Design, a team of front-edge building-design researchers with lab/offices inside Seattle's new Bullitt Center, the self-appointed "greenest commercial building in the world." Nobody was there to talk, so I emailed Christopher Meek to ask how the Weyerhauser systems look in today's terms. (Stay tuned.)

Word has it that Heartland, the company selling the HQ, has had plenty of interest, but I really wonder: Who will buy this singular place? Weyerhaeuser will continue to operate its tech center on the grounds, and also on campus are two continuing publicly accessible gardens: the Bonsai Collection (recently turned over to the newly formed Weyerhaeuser Pacific Rim Bonsai Collection), and the Rhododendron Species Botanical Garden (run by its own eponymous foundation). UPDATE: Chris Fiori of Heartland just called me back to say there has been ample interest indeed, from office, medical, and educational quarters already. There's no set asking price, and they're not accepting offers yet, but he said the 400 or so developable acres could go for $40m-$50m, and the building could be valued somewhere between $100 and $200 per square foot, all depending on proposed use. Weyerhaeuser, Fiori says, has to vacate by the end of 2016.

At left is where Weyerhaeuser is moving next. They're scheduled to be there by 2016, if all goes according to plan. The building is at 200 Occidental Avenue South, and it's a metal-and-glass cage-box by Mithun that won't remind anybody that Weyerhaeuser is a timber company. The only throwback—now seen as an innovation—will be a rooftop garden where employees might remember their Federal Way days.
Comments 20
Tags: Visual Art Blogs Architecture Enviro
The Stranger depends on your continuing support to provide articles like this one. In return, we pledge our ongoing commitment to truthful, progressive journalism and serving our community. So if you’re able, please consider a small recurring contribution. Thank you—you are appreciated!
CONTRIBUTE NOW