This artwork by one of the youth in Creative Justice last year is called Descanso, Spanish for a cross or marker placed at the site of a violent death. All photos by Tim Aguero

Claire Thornton was a prosecuting attorney with King County for several years when her bosses shuttled her back to where she'd began: the Juvenile Unit of the King County Prosecuting Attorney's Office. Like many young prosecutors, she'd served in the juvenile unit for a short time and got out of there. It was known as a place for newbies who only handled segments of whole cases, which were spread out among various attorneys. What, she wondered, had she done wrong to be sent back to juvenile?

"When I first came here, it was a training ground for prosecutors," Thornton told me by phone. "They wanted you to go to trial all the time and learn how to go to trial, which was not good for the kids."

In 2014, when she was sent back to the juvenile unit, she found that it had changed its philosophy entirely. She hadn't done anything wrong, she'd earned her way into juvenile. At the end of 2013, the unit was restructured and staffed with "more experienced attorneys," according to Juvenile Unit Chair Jimmy Hung. While there were fewer juvenile cases, he explained over email, those remaining were more serious and more complicated. The department would no longer shuffle cases from lawyer to lawyer. One case, one prosecutor.

"Now, it's your case," Thornton said. "We know the kids, we know what the victims want."

At the same time the Juvenile Unit was changing, King County was preparing to tear down its Children and Family Justice Center on 12th Avenue and Alder Street in order to build a new one. Plenty of people protested that this new building would have any youth jail at all.

Meanwhile, another arm of King County mobilized for youth in a different way.

4Culture, the county's arts agency, noticed that by law, the construction of the new center would generate $2 million in percent-for-art revenue. Rather than sending that money toward commissioning a sculpture to sit outside the building, 4Culture created a program called Creative Justice.

In Creative Justice, youth facing a nonviolent charge are given the opportunity to have the charge mitigated by participating in a 12-week art program.

Up to 12 youth can participate in each quarterly session of the program, and slots are filled first-come, first-served. The youth are referred, usually by their defense attorneys, and they elect to take part. The program is managed by mentor artists who teach classes in various venues around the city, visiting artist studios, poetry groups, museums like the Museum of History and Industry and Experience Music Project, and studying subjects from writing to painting to capoeira.

"We’re hoping to change the direction of our justice system both locally and nationally," Aaron Counts told me. Counts is Creative Justice's Lead Artist. For years, he's been a writer, educator, and counselor in Seattle, "but my heart is really with those young folks that are experiencing the most oppression in our schools and our legal systems."

The literary journal by the Creative Justice students of Nikkita Oliver in the fourth session last year was titled "Things I Need You to Know."

Thornton, the prosecuting attorney, was on the other side of the table from Counts before the program began one year ago.

She is married to an artist, which is why her boss, Hung, thought she should be the department's liaison, the one to help hammer out with 4Culture what the program would actually offer to youth in terms of mitigation.

"I was questioning, how is this going to change the kids’ lives?" she told me. "I was having a hard time wrapping my mind around having them do art—how is that going to divert them out of the criminal justice system?"

She remembers one youth in particular. He was charged with robbery in the second degree, for snatching a cell phone with use of force.

"The attorney had been telling me all along that he was really a bystander, and the kids he was with made him do it and they threatened him, and he did it because he was kind of scared of them," Thornton said. "We were like, 'Yeah, yeah, whatever, that's what kids say to get themselves out of trouble.' But he was consistent. He told the police that. He came in and told his attorney that. It was really hard to know whether that was true or not."

That young man entered Creative Justice. At the end of each session, the youth give a performance. It's not public, it's for the "stakeholders": their families, the attorneys, the judges, each other.

Thornton watched the young man charged with second-degree robbery as he performed. She doesn't remember exactly what he did or said, just that something dawned on her that night.

"We got to hear him tell his story, listen to how smart and creative he was, and he was so personable," she said. "He came out afterwards and was introducing himself to the adults that were there, including me and my husband. And a lightbulb went off for me that I don't know anything about these kids except what is written down on paper."

Thornton said she still doesn't know whether he lied or told the truth about his friends, but she doesn't think about it.

"I mean, It was more understanding him as a whole person," she said. "When the police send in their reports, it doesn’t look good for them, right? His attorneys will say he’s such a good kid, he’s had a hard life, home problems, school problems, and it’s like, well that’s every single kid we see here, so it’s really hard to make decisions based on that general type of information. What [Creative Justice] helped us to do was getting more specific information, getting to know more of what they actually need and who they actually are. More this service-oriented idea of crafting resolutions that are case-by-case rather than being very blanket about it."

The young man is on probation until this June. He has not reappeared in the system at all, which is true for the majority of the participants in Creative Justice this first year, Thornton said.

"No new cases, no probation violations since he entered into deferral in June of last year," she said, scrolling through his file on her computer. "That's a big deal because a lot of the kids that we see, once they start, well—the statements the community makes, like, 'We don't even want to expose them to the system because once they're here, they're more likely to come back'—well, there's truth to that." 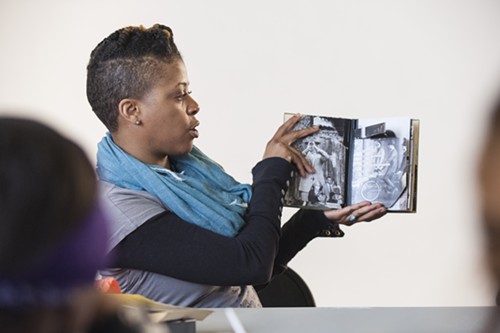 The program is funded for three years through the percent-for-art money plus grants from the National Endowment for the Arts and a gift from an anonymous local artist who stepped up with $25,000. In addition to art classes, youth who remain in the program by showing up for two hours after school two days a week for 12 weeks also receive a stipend, which some have spent to pay down fines.

Only 12 youth can participate at a time, or maximum 48 per year. The Juvenile Unit of the King County Prosecuting Attorney's Office received 4,100 referrals from police in 2015, and filed a little over 1,200 cases, Hung said.

But Thornton said she's seen firsthand the effects not just on youth of learning art, being mentored, and working collaboratively, but on the attorneys and judges who sit on the other side of the system.

"One of the most important things we’re doing," Counts said, "is reminding folks who may be considering locking this young person away that they are in community with them."

Tags: Visual Art Blogs Arts
The Stranger depends on your continuing support to provide articles like this one. In return, we pledge our ongoing commitment to truthful, progressive journalism and serving our community. So if you’re able, please consider a small recurring contribution. Thank you—you are appreciated!
CONTRIBUTE NOW