"I Want to Live in a World That Loves Women, Not Simply a Society That Doesn't Rape"

Artist C. Davida Ingram is coming up with new frameworks for making images of black people. 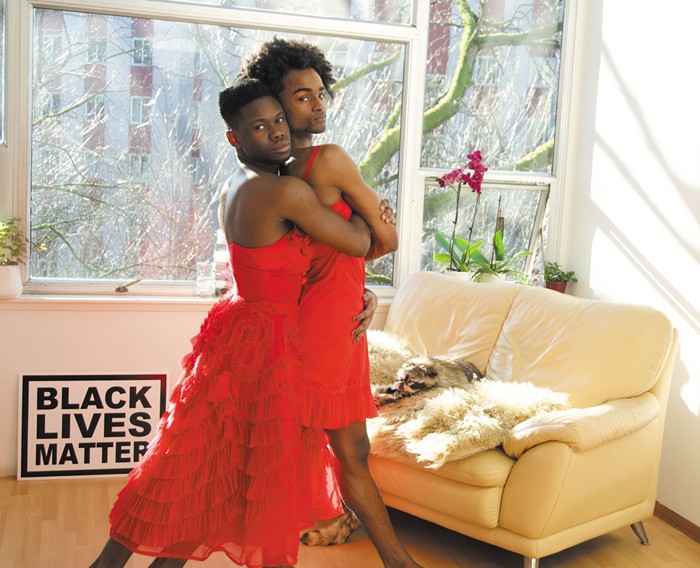 There's a moment in one of the videos in C. Davida Ingram's A Book with No Pages—on view at the UW's Jacob Lawrence Gallery through March 13—where the entire world seems to shift polarity.
Sponsored

The video opens with a dance performed by David Rue and Randy Ford to a soundtrack sung by Alisa Dickinson. Both dancers are wearing bright red dresses, which sway and flow against a tree-green background. "Red and green make brown," Ingram says about this tableau. "It's a painting. At the end of the day, I'm a colorist."

In the next scene, Rue is holding a rag doll with peach skin and yarn-yellow hair, running a hand along her body. Slowly and ritualistically, he hands the doll to Ford, flipping it so that her torso becomes a handle, her crisp lavender skirt standing upward to frame her feet.

Except she doesn't have feet. As Ford gingerly pulls the skirt over her face, her underside is revealed to be another doll, with black skin and a golden dress. She's a topsy-turvy doll, a racially charged child's toy with a history in plantation nurseries.

As Ford begins to stroke the black doll with reverence and affection, something strange happens to the music. Dickinson's singing becomes subtly combined with the digitally manipulated voice of Hanna Benn, a composer Ingram has worked with on previous projects.

This is the moment the polarity shifts. Here, amid voices layered from different times and places, it feels as if a world that has always been upside-down has finally righted itself.

In Ingram's lexicon, which often incorporates images from African diasporic thought, the doll is a representation of Oshun, an African goddess of pleasure and beauty. "Oshun is associated with vultures," says Ingram. "I read this story about a time where Oshun notices there's a lot of trouble on earth, so she decides to have a hearing with Olorun, the Sun. As she's flying to heaven, she gets transformed into a vulture."

Actual birds of prey figure prominently in the second half of the video—and in photographs elsewhere in the exhibition— dramatically posed with several Black artists and thinkers whom Ingram considers to be making meaningful work in Seattle. "I want to show how it makes me feel being in a community with these people," says Ingram. "Coming up with new frameworks for making images of Black people—and Black women in particular—is at the heart of this work."

Community is a common thread in Ingram's many projects, including her work as a curator and as community engagement manager at Seattle Public Library. The inverse of community—and the biggest threat to its survival—is what she calls "the virus of dominion."

"How do we make dominion obsolete?" she asks. "We need to imagine that. I want to live in a world that loves women, not simply a society that doesn't rape. It doesn't go far enough."

A Book with No Pages doesn't just imagine that love. It's a portal to a world where it has always existed.