What Looking at Landscapes Can Do to You

A review of Towards Impressionism: Landscape Painting from Corot to Monet at the Frye. 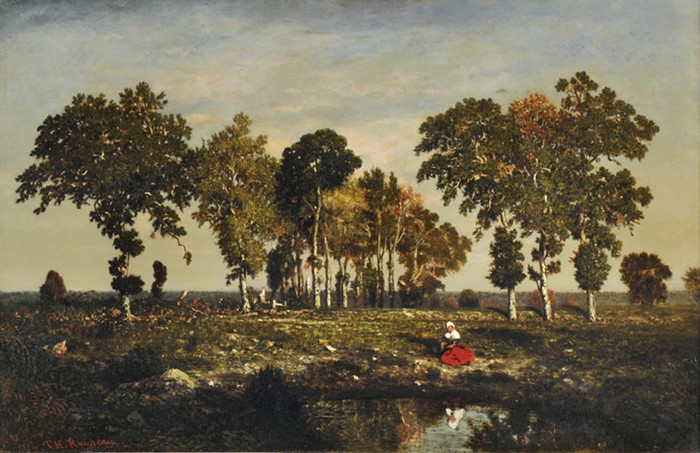 The world is huge, too big to get, but when you look at a landscape painting, it pares it down, it makes a window you can look through to see only enough and remember or think about somewhere else, another way to be.

When you look at a landscape painting, you think you could understand part of the world for a little time. We need those "spots" of time, as Wordsworth called them, moments that happen inside or to you, or things or ways you see when the world, which Wordsworth called "unintelligible," suddenly becomes not only intelligible but kind. Kind as in good and nice, but also as in kin, like kith, related to you, because you are part of the world; you need reminding of this. We need reminding a lot these days—because of the disemboweling of the Environmental Protection Agency and global warming and rising oceans and snowstorms in places there shouldn't be and islands of plastic garbage and Katrina. Also, the Dakota Access Pipeline.

In Towards Impressionism: Landscape Painting from Corot to Monet at the Frye Art Museum, the landscapes are French and 19th century, but the stuff they said then still says something to us today. In the middle of the century, according to one contemporary critic, "Paris was an immense workshop of putrefaction, where misery, pestilence, and sickness work in concert, where sunlight and air rarely penetrate... a terrible place where plants shrivel and perish... and infants... die."

A bunch of painters left the city to go paint in the countryside. Two of the places they went were Barbizon, near the Forest of Fontainebleau, and the coastal town of Honfleur. They painted en plein air, a phrase that now, alas, sounds quaint. Remember the olden days when air was clear?

They stood around outside and stared at things. They looked at the thingness of the things. Intentionally, they looked. Like what you are supposed to do today when you're being "mindful." They made places for spots of time to happen and recorded them for us—the reflection of that girl's white hat in the pond, the bend of that tree beneath the wind, the way that cloud covers half of the brown top of the hill to make it gray, the moment that clump of trees on the right looks like the head of a monkey, like the way you see things in clouds. The half of a boat behind the bush on the river's bank. Is someone there? Is someone else sitting quietly and being?

Not what happened next, but what is now. What is and what remains. What we could lose and have lost lots of because we have been careless, greedy, stupid. This art is about looking and being aware that we live on a planet that's bigger than us that we shouldn't take for granted. Most of the landscapes don't have people in them at all—and when they do, they're small. We need to remember this.

Towards Impressionism: Landscape Painting from Corot to Monet

Towards Impressionism: Landscape Painting from Corot to Monet

Seattle Sticker Patrol: The Best of 2021

The Year in Artspeak